Our Trip Out West, Part 2: We Head South

We started our journey south from Salt Lake with a hearty breakfast, because that’s what travelers need.  Fortunately there is always a Denny’s close to hand here in MERCA! and it is jalapeno bacon season there.  You cannot go wrong with jalapeno bacon, I say.  Rested, fed, and with a full tank of gas and our sunglasses on, we headed south out of Salt Lake and toward the Grand Canyon.

We got all of five miles before we stopped, though this one was planned.

Our friends Zac and Mindy had moved from Our Little Town to Salt Lake last year in pursuit of employment that was not entirely at the whim of Wisconsin’s psychotically anti-education government and this trip was a good opportunity to catch up with them.  Kim had managed to see Zac during her grading week, and we were going to spend some time with them on the way back from our Grand Canyon trip, but we were coming from Wisconsin after all and had brought cheese!  And you can’t keep cheese in the car in the summer in Utah.  So we drove to their house, navigating through several of the different varieties of labyrinths that the Utah highway department is pleased to call a left turn lane (seriously, guys, just pick one), and dropped off our Wisconsin bounty.

And then we were off for real.

Utah is a long state, and there’s not much in it beyond the natural features of the landscape.  We got to stare at them for quite a while.  They were worth staring at, really. 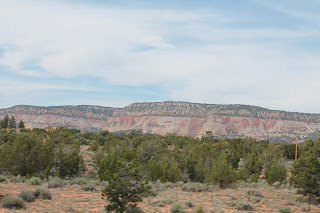 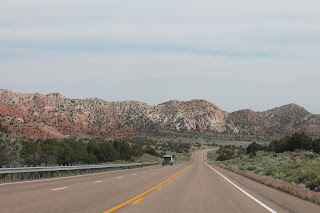 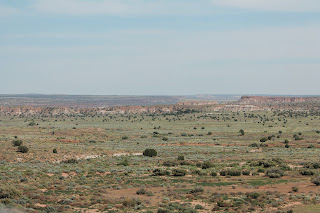 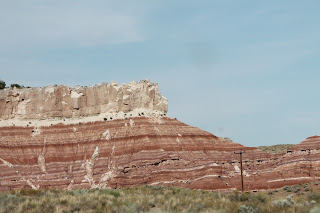 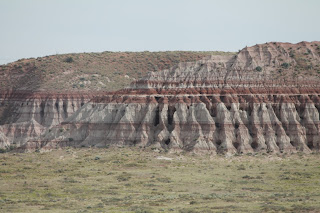 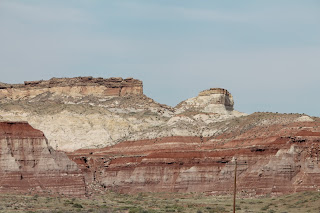 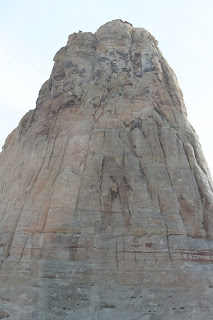 Rural radio in Utah is also entertaining, when you can get it, which is a nice thing on a journey like that.  They have more than just the usual country/oldies/right-wing-talk mix that you often find on the highways.  Rap, for example, is surprisingly popular in Utah if radio is any indication.  This was a pleasant discovery.  Not that I am a great fan of rap music, but more because it confounded my expectations and stereotypes and that’s always a nice feeling.  People are people, I guess.

Other things were a bit harder to explain.  Such as this: 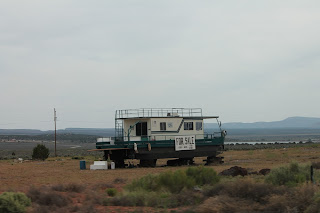 I can see why they wanted to sell it, really.  There is not much call for boats in the Utah scrubland.  I hope someone buys it.  And builds a lake to sail it on.

These things took us a while to figure out: 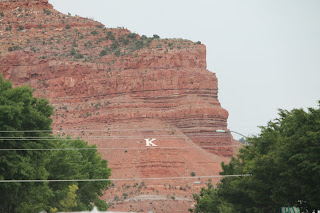 They’re everywhere as you drive south, those white letters plastered onto mountains and outcroppings.  Eventually we noticed that the letters corresponded to the nearest town name (that one is probably Kanab), and the only reason we could see for such a thing would be as a handy reference for passing aircraft.  Polite of them, really.

So we were having a grand old time headed south, stopping at various gas stations (never pass up a chance to stop for gas in the Southwest – you may not get another chance for a while) and enjoying the scenery.  And then things got serious.

US 89 south of Panguitch looks a lot like most of the highways in southern Utah.

It’s a two-lane ribbon of asphalt surrounded by open land and mountains that runs from one tiny little town to the next without the bother of cross streets, sharp corners, or clutter.  You can see pretty much everything from anywhere.

We had stopped in Panguitch for gas and snacks and were headed on toward our destination.  Kim was driving and I was in theory navigating, though at that point my job duties were, shall we say, minimal ("stay on 89 until further notice").  Nevertheless I was looking down at something when I heard a loud bang and then heard Kim gasp.  When I looked up I saw a white cloud of debris rolling toward us about a quarter mile up the highway, out of which came skidding along what was left of a sedan.  We pulled over to the side of the road and I went running up to see what I could do.  Those old firefighter reflexes die hard.

The sedan came to a halt on the northbound shoulder, and the time I got to it there were already several people attending to the driver.  It’s something of a comfort really, to know that in times of crisis people will stop and help.

The entire driver’s side of the sedan had been sheered off – panels, doors, tires, everything.  The driver was awake and conscious – he’d missed being sheered off too by about three inches – but wedged into his seat by the dash.  His legs were clearly broken.  The others who had gotten there first were with him, and since my training was in firefighting and extrication rather than medicine there wasn’t much for me to do.  I did call 911, which is a tricky process out there in the open land and which took several minutes.  I was the second person to get through to them, and since the first person hadn’t provided much detail they asked me for whatever information I could give them.  “Multi-car accident with injuries,” I told them.  “No fire.”  “On our way,” they said.

From what I gathered, the sedan had drifted over into oncoming traffic – trying to pass?  simply inattentive?  who knew – and clipped the side of a pickup truck and an RV.  The truck had lost its driver’s side front tire, and the RV was raked from stem to stern, but neither driver was hurt.

Eventually the emergency services people showed up – first the cops, then the fire and rescue teams – and they cleared the road and cut the guy out of his sedan.  We watched them load him into the ambulance before the cops shooed us down the road.  I’ve tried to find news reports on the accident – surely there must be some somewhere – but so far no luck.  I wonder what happened to the guy.

We headed on south.

It was a hot day, and you could see the temperature climbing on the dashboard thermometer as we got closer to Arizona.  By the time we reached the Glen Canyon Dam on Lake Powell it was well over 100F.  But the dam is an astonishing sight, so we got out to look anyway. 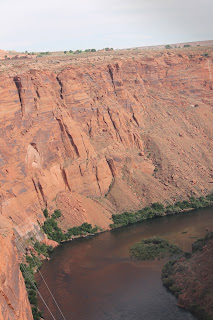 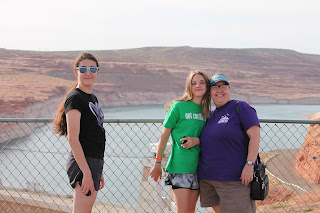 We didn’t stay long, however.  That’s a lot of heat to watch a dam.

We drove on into Arizona, watching the landscape go by.  At one point you go through a giant red mountain of bare stone, weaving your way down to the valley floor before heading off.

It was after 8pm by the time we got to Grand Canyon National Park, and much cooler.
Posted by David at 12:06 PM

1. The White letters are for the local High Scholl. (<<< I didn’t misspell that! I wuz edjetcated in the Salty Town.) Sometimes, it’s the local university - such as the big ‘Y’ (BYU) on the mountain you saw as you passed thru Provo.

2. RE: “I’ve tried to find news reports on the accident – surely there must be some somewhere – but so far no luck.  I wonder what happened to the guy.” I”m still waiting to hear the fate of the two people from Maine who crashed their airplane here in Elko 11 Years ago … If they can’t find it on the internet, local papers don’t know it happened.

1. Huh. I guess there's enough overlap between town and school names that I would have missed that. Thanks!

2. I just can't believe that in this day and age of full-bore internet guzzling content at terabits per second someone wasn't monitoring the emergency radio frequencies and posting it to their tumblr account or tweeting about it. Astonishing. How much competition did this have for news space in Garfield County? Sigh.