1. I aten’t dead.  I know it seems that way - and sometimes it feels that way - but the fact of the matter is that my world has gotten into another of its periodic blurry phases where I find myself rushing about from task to task without any intervening time for reflection or energy to do much beyond those tasks.  The sad thing about modern American life, however, is that no matter how busy you are you can’t really complain to anyone because they listen patiently and then say, “Well, let me tell you about MY life” and then there is a Great Sad Among The People there is no winning that.  Plus, it has been a long spring for many reasons, and to be honest writing has been fairly low on the priority list.  Here's hoping for change.

2. Track meet season has started in earnest here in Our Little Town, as the athletes from Mighty Clever Guy Middle School have been whirling around the oval or hurling themselves across long vertical or horizontal distances.  So far I’ve made it to two and a half of these meets – 1.5 in the town south of us, and one here.  The first one was held in gale force winds on a grey day that felt more like March than May.  The second, held a week later in the same exact place, was early summer.  Today’s was more spring-like.  Lauren has been doing very well – she has very good form in the high jump (she came in first place in today’s meet among the girls, and didn’t lose out to the top boy by much), enjoys the triple jump, and seems okay with the 4x200 relay team.  Her relay team came in third today because they were one of the few teams who know how to pass a baton.  I sympathize with this, having been single-handedly responsible for a week’s worth of baton practice during my ill-fated track career back in high school, so yay Lauren!  My role in today’s meet was to be one of the timers.  Nothing good happens on its own, and this way I got to see the end of every race. 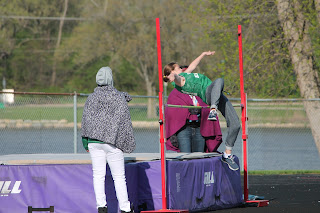 3. Theater season has also started in earnest.  Way back when, I taught Tabitha how to run a spotlight for 4H Drama.  She will never be unemployed because of that.  She has run the spotlight on the last two plays down at Local Businessman High, including the recent production of West Side Story.  It was a fun production – more than worthy of the high school’s efforts, I think – and it left me humming random snippets of the musical for weeks.  So, win.

4. I can now chew on the right side of my mouth again, which is a bit of a victory.  Of course it involved going to the dentist and having an old, cracked filling removed and a new, theoretically uncracked one put in, so there was that.  But it is nice not to have to think carefully about the logistics of things every time I try to eat something.  I learned how to eat when I was very young and it’s been mostly autopilot ever since.  Autopilot is a good thing.

5. The turkeys are getting bigger, which is perhaps the one thing that turkeys really excel at aside from being the most ridiculous creatures on earth.  We still have six of them, which boggles our collective minds – domestic turkeys are not known for their robust natures.  I’m the one who usually lets them out in the mornings, which they just love, and I find it soothing to hang out with them in an odd sort of way.  I’ll sit there with them for a few minutes and they’ll wander on over and hang out with me and there we are.  I think to them I’m just another turkey, and perhaps they are right. 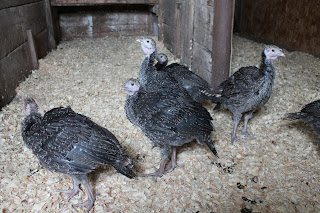 6.  If anyone can explain to me why the police officer insists on parking in the Stop & Go lane of LBHS precisely during the peak drop-off time in the mornings when there are invariably multiple open parking spots mere paces away, I’d be glad to hear it.

7. Tabitha was once again honored by LBHS for keeping her grades high, which is a nice thing.  They have these Academic Award ceremonies where they gather everyone in the auditorium and hand out various prizes depending on how many years the student has achieved the required levels of success.  They’re the great ceremonies – you show up, there is a brief welcome, they read the name of every student who has won the award this year (maybe a hundred names, arranged by class, out of a total population of about 1400) while the students walk across the stage and get their award (so you can photograph your child), they say nice things about the valedictorian, and they send you back out into the night, the whole event lasting precisely twenty minutes.  Perfect!  This was Tabitha’s second award, so this year she got a letter for her as yet unpurchased school jacket.  It fit with her t-shirt. 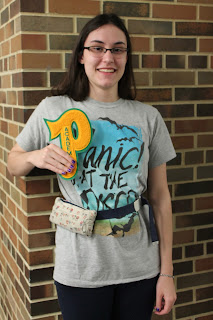 8.  Yes, somehow I have become a fan of Panic! At the Disco too.  You would as well, if you listened.  Sometimes it pays to have kids who are hipper than you are.  You find out good stuff.

9. I have to put something in here about politics, otherwise Lauren will feel cheated.  She finds the political stuff to be boring but has come to expect it.  But politics has taken a rather dark and dangerous turn of late, now that Donald Trump has actually become the nominee of one of the only two major parties we have.  Trump is by far the most dangerously unqualified grifter ever to have been nominated for higher office by a major party in this country’s once-proud history – a bloviating bullshit artist, trust-fund baby and serial bankrupt, a man who has led the Republican nomination process for nearly a year now without ever once having put forward a single coherent idea or policy (which speaks volumes of the GOP base) and who can only be excused from being called a Fascist because he hasn’t got the intellectual heft or consistency to pull it off.  The thought that this nation has sunk so low that him winning the presidency is even remotely within the realm of possibility is a damning indictment of American culture and intelligence, and this is especially true given the collection of blank-stared empty suits, theocrats, meat puppets, half-wits and has-beens he steamrolled over to get that nomination.  Yes I will vote for Hillary.  Or Bernie.  Both of them have actual brains, both of them understand the American constitutional process, neither of them has recently promised to destroy the global financial system, crash the dollar, eliminate the Separation of Powers, or subvert the US military, and that puts them miles ahead of the Republican nominee.  Who wants to write about this?  It will just scare the horses.  And anyone who cares about the future of the American republic as well.

10.  I built a gas grill on Sunday.  We used it that evening for Mother’s Day dinner.  There was no fireball and I still have both of my eyebrows.  I consider that a win.
Posted by David at 10:30 PM