So just when I said I was going to start reading the Game of Thrones series I had to put it on the back burner for a couple of days while I drove to Philadelphia to spend some time with my mom.  The highway patrol tends to frown on reading while driving – it leads to litter all over their nice clean interstates – so I had to find other ways to amuse myself.

Yes, I had a lovely time visiting my mom, thanks for asking.

Usually on these road trips I go with other people – sometimes just Kim, once just Lauren, most of the time with the whole family – so there are people to talk to during the ride.  And when I go by myself, I either leave things quiet or just listen to the radio or CDs.

Yes, my car has only a CD player, not a Bluetooth adapter for gizmos I don’t actually have anyway.

I make use of it too, since for long stretches of the ride there is really no other radio besides country music, classic rock, fundamentalist rantings, or right-wing political lunacy.  Sometimes all of them at the same time, for which you have to admire their dexterity if nothing else.  I once read that the South begins approximately forty miles outside of any major American metropolitan area, and as someone who has spent more than a few hours on this great nation’s interstate highway system I can vouch for that.  So I bring my CDs.

Kim went to the library before I left and borrowed an audiobook of Ready Player One, by Ernest Cline, so I spent most of the ride there and back listening to that.  You should read it – it’s really quite entertaining, especially if (like me) you grew up in the 1980s.  It’s set in the 2040s, but much of it hinges on 80s pop culture, most of which I did not really remember.  I wasn’t much for the popular culture of the 80s even during the 80s, but it was fun to listen to all the names roll by even if I couldn’t quite place the songs or movies.

But there was one reference that finally answered a very old question.

Much of the book concerns old computer games.  The basic set up is that by the 2040s most of the world spends most of its time in a vast online immersive world called The Oasis, while the real world slowly falls apart.  Cline doesn’t really do much with that dichotomy, much to my regret – one character has an impassioned little speech about it, but Cline lets the issue drop as he’s mostly concerned with The Oasis itself and the stories of the protagonists who more or less live there.  The engine of the plot is a contest.  One of the creators of The Oasis has died and he leaves his vast – seriously, you can’t imagine how vast – fortune to the first person who can piece together the clues left in his online journal (“Anorak’s Almanac”) and somewhere in The Oasis find three keys, pass through three gates, and reach the final Egg.  Since the creator was an 80s junkie and thoroughgoing nerd, most of the references and clues have to do with old computer games, SF/F novels, movies, and the like.

Also, the audiobook was read by Wil Wheaton, who at least twice has to read Wil Wheaton references in the text, which I found amusing.

One of the clues centers on a computer game called Zork.  And as Wheaton described the game play, it finally hit me – yes, I had played that game.  It was the game that turned me off of computer games for the rest of my life.

By rights I should have been a computer game junkie, I suppose, since I was precisely the target demographic – bright, socially awkward young middle-class male in the 1980s who read SF/F, did well in school (especially math, but most other things as well), and lived mostly in his head.  This described a good portion of my friends as well, many of whom did in fact enjoy computer gaming.  They even got me to play D&D once, but that never took either.  Not sure why, really.  Just how it worked out.

Sometime in the spring of 1983 three of us – me, my girlfriend Sharon, and my friend Jill – took the Amtrak train from Philadelphia to West Hartford, Connecticut, to visit my friend Julia for a long weekend.  We had a great time, visiting parks, wandering around Mark Twain’s old house, spending an evening at a Pink Floyd laser show and another at a showing of Monty Python’s Meaning of Life.  We even spent a day walking around Julia’s high school with her, which was more fun that it sounds.

One evening we were over at Julia’s boyfriend Tom’s house when he pointed us to a computer.

This was long before personal computers were standard household items as ubiquitous as televisions or indoor plumbing, and while I had worked on a computer before – a dumb terminal in a classroom connected to a mainframe in my high school’s administration building – I had never seen one in someone’s home until then.

Yes, I’m old.  Thank you.  Now fetch me a bourbon and let me finish.

Tom had a computer game that he wanted us to try, and we each took turns on it.  I don’t remember if Julia played it or not that evening – she would have seen all this before – and I don’t recall what Sharon or Jill thought of it.  I do know that when it was my turn I sat down and booted up the game not quite knowing what to expect. 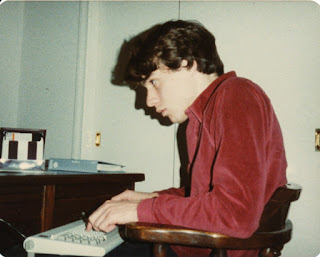 The game was a text-based adventure.  You’d get a bit of description, and then you could enter commands for action such as “turn left” or “open door” or “pick up object” or some such.  You started in a field near an old, empty house, and from context it was clear that you were supposed to go inside.

I wandered around the inside of that digital house for nearly forty-five minutes, never once finding out what the next step was.  I went out.  I went back in.  I peaked in cupboards.  I went from room to room.

Eventually I decided that this was not an entertaining way to spend time, so I exited the program and found something better to do.  Everyone else had long since moved on to some other room, so nobody asked me how I did or gave me advice about what I should have done.  I just chalked the whole thing up as a lost cause and moved on.

Somewhere in central Pennsylvania Wil Wheaton started reading about Zork, describing the opening scene of the game and it hit me – that’s the game!  I remember that set up!  I remember that house!  I never did know the name of the game back in 1983, and here on I-76 thirty-three years later (and well over forty miles from the nearest metropolitan area) the answer had appeared.

I waited to see what I should have done, all those years ago.

Apparently there was a carpet that you were supposed to lift up, revealing a tunnel or staircase or something that led you down into a subterranean world of computer adventure.  Who knew?  Well, who knew besides almost everyone else who ever played that game, I suppose.  Clearly I was not cut out for that kind of thing.

It’s a good book, and while there are a few plot points that go unresolved it does provide a very entertaining story and some interesting things to think about.  I’d recommend it, even if I still have no particular intention of picking up computer games.

Now it’s back to Game of Thrones.
Posted by David at 9:57 PM