You Gotta Fight For Your Right To Poultry

It was a long night down at City Hall.

For years now, a dedicated group of people have tried to get Our Little Town to pass an ordinance allowing us to keep hens in town.  Not roosters – nobody likes roosters, not even hens.  But a handful of backyard hens that would lay eggs, consume all of your leftovers, and generally raise the ridiculousness quotient of the town to new and giddying heights seemed like a fairly reasonable request.

It’s been an uphill climb.

We joined this effort recently, Lauren having first started raising chickens for her 4H project last year.  We’ve been through two cycles of poultry now – two groups of chickens and, this year, turkeys.

Turkeys weren’t on the agenda.  Keeping domestic turkeys in town is not something anyone with half a brain would try to do.  They’re just too big.

I went to one of the meetings over the summer.  Kim’s been to a few others.  Lauren has gone to all of the ones we’ve been to.  There are a lot of people who have put in a lot of time on this, going to Planning Commission meetings and City Council meetings and discussion meetings of many kinds.

Tonight was the night that the City Council would vote.

Kim and Lauren went down for the start of the meeting.  I had to drop off Tabitha at a 4H meeting, so I got there late.  The place was just packed, although most of the people were there for a long discussion of something rather more abstract and unrelated – something that, frankly, I’m not really sure how the City Council could have much of a say about one way or the other, but that’s what happens when the public gets to have its say.  They say a lot.

In fact, they said so much that by the time the meeting was about to take up the chicken ordinance I had to leave to get Tabitha again, so I missed the big conclusion, although I did speak with the Council President privately to let him know where I stood.

Many people spoke, apparently – all but one of them in favor of the hens.  Lauren was one of the people who spoke in favor of the ordinance – she leapt up to speak first, in fact, and from what I heard she did a marvelous job of presenting her case. 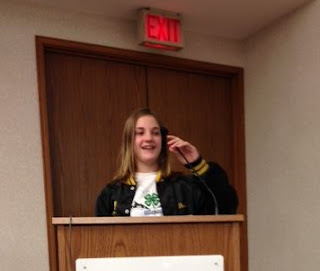 And this time there was nobody in a giant fuzzy chicken suit to distract people.

I didn’t think the discussion would last very long – it’s not like this hasn’t been debated for quite some time by now – but after Tabitha and I got home and I sat on the couch grading essays for a while it occurred to me that it had in fact been a while.

But in the end, the chicken ordinance passed.  We can now have chickens here in Our Little Town.

I can't believe it finally passed. Good job guys! Now I have to decide if I really want chickens. My anti chicken husband is already talking about cleaning out a spot in the backyard for the coop. Help, do I really want to do this?!?! Would your daughters be available as mentors?

So glad it's over. Six years is a long time - that's half my son's life ago! (Though he still wants to name on Brett Favre.) Now that it's over, and my commitments on city committees have come to an end, I can finally consider dying my hair pink again! Maybe i am no longer qualified for hair dye, as it took so long to do this! ;)

Julie M - You may want to do it, sure! Chickens don't take much work once you get through the initial set-up. Lauren might be willing to be a mentor (Tabitha doesn't do the chickens) - she likes to spread the poultry gospel. :)

Zythia13 - He can name his chicken whatever he wants, I suppose. And you're never too old for pink hair, really, as long as you have hair to turn pink.