The Things That Haunt Us, For a Reasonable Fee

I spent my Saturday night sitting in a tent listening to people scream.

There are very few occasions where this is considered fun.  For example it is kind of a drag when camping, as I can attest from having had the pleasure first hand.  Likewise, it’s not really the optimal driving experience, even if you subtract the tent.

But when the Halloween season rolls around and the various Haunted Houses spring up across the countryside begging for your entertainment dollars, well, that’s different.

Lauren loves Halloween.  She loves everything to do with Halloween, up to and including the fact that it is her birthday.  And really, what’s not to love?  There aren’t many times in these modern United States where you can knock on your neighbor’s door with impunity and receive sweets instead of incoming fire.  You might as well take advantage of them when they come up.

There was a time when she was satisfied with the local ones – the ones that we could just wander down to and visit after dinner for an evening’s quick entertainment.  We went through a couple of those over the years.  But last year she decided that she wanted to branch out into something bigger and better, so she convinced me to take her and a friend over to one a few towns north of us.  It was a big hit, actually.  They had a grand time going through most of the attractions there, and I hung out in the Dad Tent reading my book and talking to my brother on the phone, which I don’t get to do as often as I’d like.

Unfortunately that place burned down over the winter.  They say it will be back next year.

Wouldn’t it be ironic if it were actually haunted then?  How could you tell?  It would be awful to be that ghost, I think.  There you are, restlessly plaguing your patch of ground and doing your best to frighten the pre-dead, and everyone thinks you’re just another cast member in makeup.  It would be enough to make you hang up your chains and take the rest of the year off.

Do ghosts get vacations?  How would that even work?  Someone should look into that.

So going back there wasn’t much of an option.  Fortunately, there are about fifteen thousand other Haunted Houses in Wisconsin.  Unfortunately, Wisconsin is not exactly Rhode Island, a state George Washington probably practiced throwing silver dollars across in order to warm up to his big moment on the Potomac.  It took a while to find one that was both suitably interesting and also not three hours away.  But Lauren is nothing if not diligent when this sort of thing is on the line, and eventually she settled on one that was within a reasonable drive.

Now, ordinarily, these costumes would pick up on the Halloween Is Scary theme that the Haunted House itself represents, but then Lauren and her friends are not ordinary people.  So, as with last year, they went to the Haunted House in their fuzzy animal onezies. 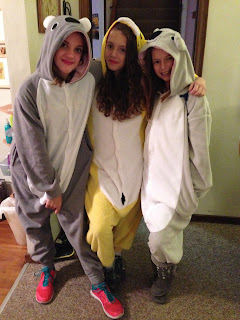 You cannot imagine how popular this made them.  Everyone knew who they were.

We drove on up and eventually found the place, and – after confirming that it was actually open, which was not actually very obvious from the road and required driving along a pumpkin-lined path for a good quarter of a mile before signs of life appeared – got in line for tickets.  A flat fee got you admission into all of the various attractions, while simultaneously attracting the attention of the requisite deranged clown. 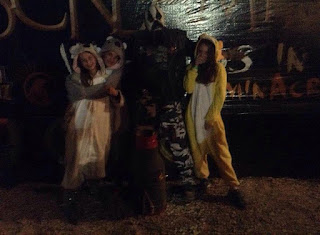 He turned out to be a pretty decent guy, once you got to know him.

Lauren and her friends then disappeared into the cavernous tent holding the line to get in, a tent filled with people (many in costume, though none as fetching as our heroines), loud music (mostly death metal, but occasionally Neil Diamond [seriously]), and, most important of all, no dads.

Yes, they’re old enough to handle all this by themselves.

So I wandered on over to this year’s version of the Dad Tent and made myself as comfortable as I could in an unheated tent on a 30F night at a venue where nobody thought to sell hot beverages.  There were a few other Dads there too, and we chatted amiably.  They all remarked on the fuzzy animal onezies.  Sometimes we drifted off into our own concerns – I brought a book, for example, because that’s how I roll.  For a while we were joined by a young woman whose friends had not succeeded in getting her to go into the actual attraction even though she had paid for her ticket, largely because of her terrible fear of clowns.  We dads kept her company and protected her from the demented clown whenever he wandered by, though eventually the clown got the hint and tactfully left her alone.  We never did get a good answer as to why she was there in the first place.

They always put the Dad Tent at the end, where everyone funnels through to the exit.  This way you don’t miss your charges.  It took an hour for Lauren and her friends to get into the place, and another forty-five minutes or so to go through it, but eventually they appeared.

The consensus was that this Haunted House was not as scary as last years, but it was more fun.  So, win.

The other consensus was that Haunted Houses make you thirsty, so on the way home we stopped at a local convenience center for some tasty caffeine-free beverages.

The fuzzy animal onezies just made everyone’s night there too.
Posted by David at 8:58 PM