Her name was Julia.

It is important to remember her name, I think.  Names matter.

She was 48 years old.  She had a husband and two children.  She spoke with an accent somewhere between her native America and her adopted Britain.  She studied Old Icelandic sagas, earned an MBA, and at one time ran a consignment shop for children’s clothing.  She made her own homemade jellies, kept chickens for a while, and lived in a 350-year-old house full of books.  She usually ended phone conversations by saying “Bye for now!”  She died today.

She was my friend.

I met Julia at the tail end of ninth grade.  She went to the other high school in my district, the one Matt had switched into after middle school because he had moved out to that end of the township.  I was sufficiently nerdy that I took a day off from my high school to walk around his, and my parents were confident enough about my educational prospects that they said I could do it.  Matt and I ran into her in a hallway.  I remember exactly what he said to me as she walked away.

A little over a year later Julia and I found ourselves at a party together.  She was getting over a bad experience with a guy and had pretty much sworn off the whole notion of love – the sort of grand gesture that comes easily to sixteen-year-olds.  I remember thinking that this was a shame, that this woman would make such a decision, and trying to talk her out of it.

We were together for about three weeks after that.  That turned out to be a surprisingly long and complicated story that would benefit nobody to tell at this point, but we remained friends for more than thirty years after it was over.

This photo is from that summer. 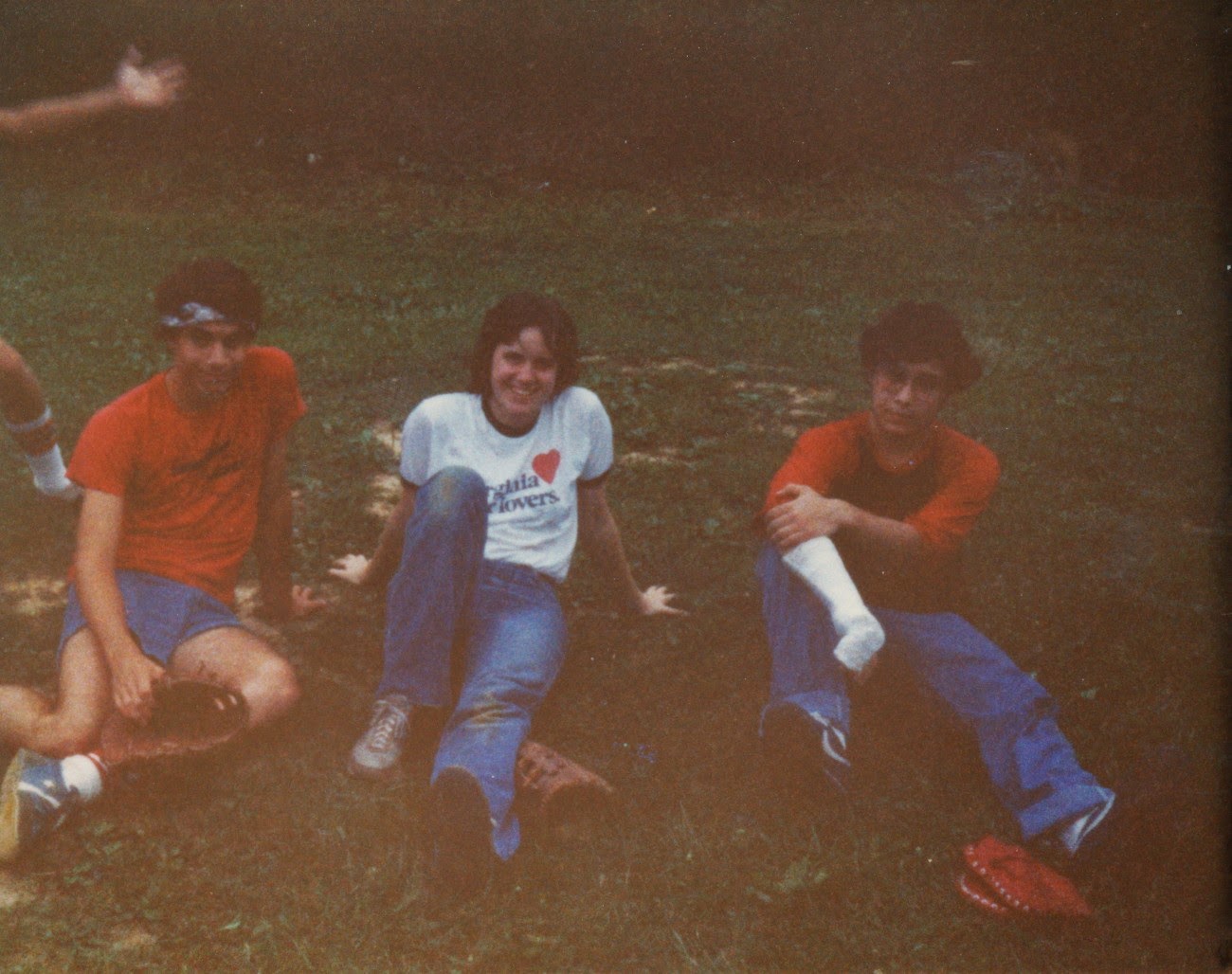 I’m on the left, in my short-lived bandanna phase.  Julia is in the middle, obviously.  That’s Jacob on the right, one of my best friends at the time and a key player in the weirdity that marked that summer’s story.  We’re at a church-league softball game, where I had talked the both of them into playing for my team.  I know why Jacob has the cast on his hand, but I don’t remember whether we won or lost the game.  It didn’t seem important even then.

I am the only one in that picture still alive, which is a strange thought indeed.  Jacob died about four years after this photo was taken.  The ghosts accumulate as you get older.

Julia moved to Connecticut at the end of that summer and we wrote long letters back and forth, letters I still have.  I remember the first time she called just to say hello.  It surprised me that you could do that, make a long-distance call for no other reason than to talk to a friend.  Long-distance calls were unusual then.  The following spring Sharon, Jill and I went up to visit her there – three high school students on our own on the Northeast Corridor Amtrak line.  We had a grand time.  I still have the copy of Letters From the Earth that I bought when we visited Mark Twain’s house on that trip.

We traded a lot of visits over the years, Julia and I.  I went back to Connecticut for two of the Medieval Feasts that she held in her back yard and we spent a fair amount of time picking far more strawberries than anyone could possibly eat, which is easier to do than you’d imagine.  When we were in college I went up to New York for a weekend walking around her campus, and she came down to Philadelphia to return the favor.  My first trip out of the US was to Cambridge University, where she was a student in the early 90s and where I first met Richard.  Julia and Richard got married not far from where she was living when I met her in ninth grade.  It all goes ‘round in circles.  Kim and I took the girls to visit them in the UK in 2004 and 2012.  They came here in 2005.

She always knew it would be her brain that would get her in the end, though I don’t think she saw cancer as the way it would choose to do so until it happened.  When I saw her last, in 2012, we talked about her fears that her family history of dementia would circle around to her at last.  We spoke on the phone a fair amount after her diagnosis, though, and she never did forget who I was.  Nor I her.

If you knew her on Facebook you saw how she was open and honest about her diagnosis and treatment, a mark of bravery or perhaps just the studied inquisitiveness she brought to all things.  Maybe both.  She spoke of small victories and frustrations, of worry and hospital stays, of walks and hopes and concerns.  Eventually, as always happens with her diagnosis, she spoke of the transition from curative to palliative care, though the British are far more up front about such things than Americans are.  “Terminal,” they call it.  And so it was.

I have never really figured out how to stop loving anyone.

I don’t think I will start now.

Love changes, of course.  It grows, it evolves, it becomes new things and takes new shapes even as it remembers the old ones.  If you are very lucky in this world you will find people to share that with, even as their part in your life moves from one role to another, even as physical distance tries to keep you separate, even as the years lengthen on and the memories and stories recede into the past until there is nobody left to tell them to except each other, all those old tales of drama for stakes no one recalls but you.

Her name was Julia.  She was my friend.

Oh, David. I am so sorry to hear this sad news. My very best to you and yours, and hugs across the miles.

I am so sorry for your loss. What a lovely tribute to Julia and your friendship.

Love and comfort to you and yours and hers.

Thank you all. She was a good soul and a dear friend.

I am so sorry. She was a good person.

Much love to you and comfort to her family. Sometimes brains really suck.