Strike Up the Band

Last night down at Mighty Clever Guy Middle School the assembled band members from a number of elementary schools here in Our Little Town – including Not Bad President Elementary – gathered together to play their first concert.

You should have been there.

Now, it must be said that the music was a bit rough.  Even Lauren, who was in the middle of it all, admitted that afterward.  Many of these kids have only been working with these instruments for a couple of months, after all, and the first time they had assembled together as a full-sized band was when they were on stage.  There were a lot of them, and there simply wasn’t room even in rehearsals.

But you have to start somewhere, and it might as well be here.

We got to MCGMS on time and found out seats, right in the middle for proper acoustics – though we needn’t have worried about that all too much since 75 fifth-graders wielding brass and woodwind instruments can generate a fair bit of noise, particularly for the opening notes of songs when everyone is just bursting to charge ahead.  Enthusiastic bunch, yes indeed.

More musicians showed up than the teachers anticipated, so there was a slight delay while they rounded up a few extra chairs.  But eventually the stage was set and everyone came marching out into their places. 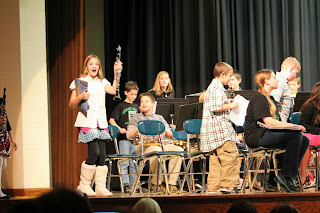 The songs were short, as you would imagine they would be under the circumstances, but what they lacked in length they made up for in volume so if you’re going by the total number of decibels per unit song it all evened out. 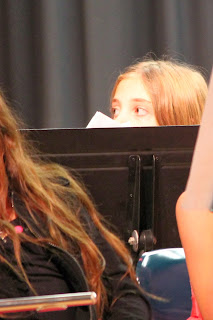 And then the filed off, to much applause. 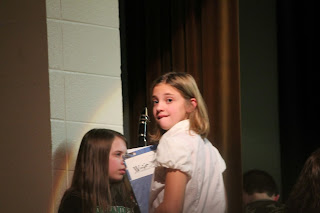 We stopped by a store on the way home and bought ice cream, because it’s Wisconsin and ice cream season runs all year long and a celebration was in order.

Congratulations, Lauren.  I’m proud of you.
Posted by David at 8:25 AM

I was treated to that 2 years ago.

We did not encourage participation beyond the instrument rotation. :D

I find it endearing in a way, and I love how it makes her happy.

I will admit to humming "The New Ashmoleon Marching Society and Student Conservatory Band" all the way home, though. :)

Oh, if it made mine happy I would have encouraged it. But when you are playing Mozart's Sonata KV311 on one instrument and Hot Cross Buns as interpreted by dyspeptic geese on another, the frustration sets in quickly. :D