December is the season of concerts.

It’s just structural, really.  School starts in September.  By the time everyone gets their instruments assigned and the groups get organized it’s a few weeks later.  You get two months to practice and then you have to get the concert in before there is a long vacation and everyone forgets everything.  And then you get to start over in January for the next round of concerts.

For certain values of “we.”

You see, December is also the season of, well, just about everything.  Between the onrushing holiday season, the end of the semester, and the general sense that the year is winding down and there is still half a “to-do” list to go from January, it gets busy.  Last night was also the big 4H Dance & Games Party, organized by Lauren and her friend Taryn.

Forces would have to be divided to accomplish a multiple-front mission.

So Kim, who is a much better planner than I am, handled the 4H end of things.  There was a lot of baking, punch-making, games-gathering, and general riding herd, and I never did get to see any of it in action because the party ended at about the same time that the concert did.

This was a rather longer concert than Lauren’s, mostly because the songs were longer.  There was a short introductory set by a group of 5th grade musicians, and then the various MCGMS orchestras began their performances, youngest to oldest.

As an 8th grader, Tabitha is now at the top of the MCGMS heap and thus got the pivotal “last word” position for the evening. 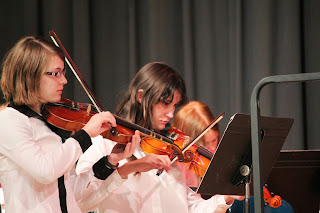 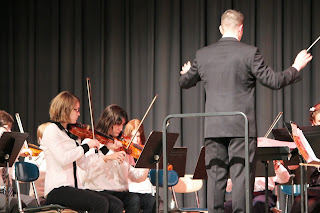 It was a lovely show.  They played with enthusiasm on a cold winter night, and we had a grand time. 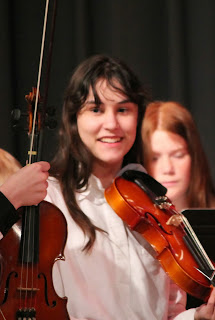 I have a Friday concert and a Sunday concert that small relatives are in.