We already had the door.

When Kim and I moved into our house here in Our Little Town, way back when in the 90s, the door was still painted primer grey.  This was fine by me, as I tend not to notice such things – I figured that as long as it kept the heat in and the burglars out it was doing its job and after that I didn’t need to think about it anymore.  This didn’t sit well with Kim, who has a strongly expressed optimizer gene.  So perhaps a year or two after we moved in, after a fair amount of planning and a trip the local hardware store, she painted it blue.

TARDIS blue, it turned out.

So when yesterday’s 50th Anniversary show for Doctor Who rolled around, decorating it was easy. 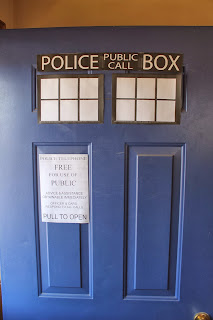 Who needs to give directions, when you’ve already got the landmark right there?

Like most Doctor Who fans new and old (somehow I still stumble over the word “Whovian” – I suppose that too will pass) we have been looking forward to the big 50th Anniversary show.  For those of you who aren’t fans, well, it’s kind of hard to describe the dedicated pocket universe that the show has created for itself and its devotees – it’s like I stumbled into this entire subculture that existed alongside of the normal reality I had lived in all my life.  Actually, no.  It’s not like that.  It is that.

And now I find myself part of it.  Huh.

So we sent out the word to those whom we knew were also part of the fandom, cleaned up the house, set the DVR onto record, and had us a party.

Kim made a cake like the one she made for Lauren’s birthday. 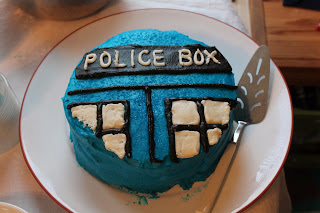 And another one that was already quite moist. 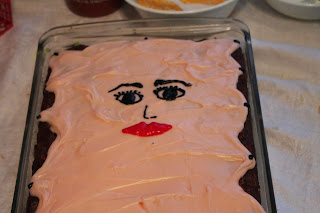 There were time vortex cookies and Lauren and her friend Autumn made little Adipose figures out of marshmallows. 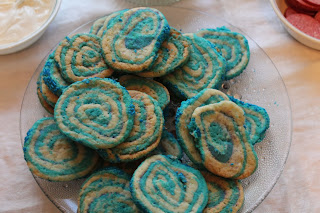 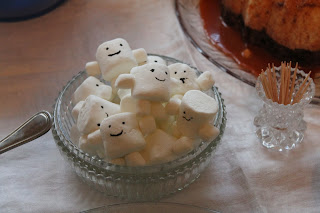 There was also custard and, well not fish fingers because those are not cool no matter what Matt Smith says, but graham crackers instead.  Yes, I understand the irony of that coming so quickly on the heels of my post on Rev. Graham, but hey – they taste good and we don’t need to be scaring the horses.  And chili, because somewhere in there you have to have something real to eat.  Friends came and brought all sorts of good food on top of that.  We were set.

It was a good show.  I’m not sure what the various critics have said about it but neither do I really care.  We got to see David Tennant clearly having an awful lot of fun with Matt Smith.  John Hurt did a wonderful job with his character.  There were all sorts of references (including at least one Monty Python reference) that were fun to figure out.  And they devoted a pleasing amount of screen time to Billie Piper.

Really, what more could you ask?

So it was a good day.

We may leave the decorations up on the door for a while, just because they’re kind of fun to have there.  They may even become a Christmas tradition, which would make a certain amount of sense given the history of the show.

You have your traditions, we are creating ours.
Posted by David at 6:00 PM

Kim is quite the cook! I'm salivating.