She Goes Up to Eleven

If you are one of the few people on this earth who like Banana Split Oreos, you pretty much have it made.  They’re all yours.

We discovered this over the weekend, during Lauren’s birthday party.

Lauren is almost 11 now – the official date is not until Halloween, but you can’t really have a birthday party on Halloween when you’re a kid because it interferes with the serious business of shaking down the neighbors for candy.  When you’re older you can have all sorts of parties with this combination of holidays, though, and when Lauren reaches that age we trust that she will let us know how they go, as we will likely have been asleep since tea time.  Thus passes the circle of life.  At the present, though, parties must be scheduled around the candy, so that leaves either the weekend before or the weekend after.  And before is always best.

The nice thing about birthday parties when kids get older is that the honoree and guests really just want you to feed them and leave them alone – they can handle the fun on their own.  So when four fifth-grade girls showed up at 3pm on Friday trailing sleeping bags and presents, we just got out of the way.

Some of us got further than others.  Tabitha did some quick math and bailed, spending the night over at a friend’s house.  This is the prerogative of the older sister.

Everyone had a grand time here.  Lauren and her friends disappeared in a cloud of giggles and assorted noises – by which we could track them, should we be so inclined – and they kept themselves entertained.  They wrote their own murder mystery and filmed it on Lauren’s iPod.  They rampaged up and down the driveway on the old PLASMA car.  They entertained the rabbits, or vice verse.  And so on.  They pretty much kept themselves going all afternoon.

Dinner was – by special request – waffles and bacon.  And since the cake was not scheduled for the next day, dinner was followed by the First And Probably Last Grand Oreo Taste Test Competition.

Do you know how many flavors of Oreos there are?  HUNDREDS.

We settled on five.

By popular vote, the favorite was Mint Creme Oreos, which are essentially Thin Mints with an extra layer of white Oreo creme on top and how could you not love them is what I want to know.  Chocolate Oreos came next, followed by Berry Blast and Peanut Butter, which was kind of dry.  Only Lauren and I liked the Banana Split Oreos – nobody else could even stand them.  So win for us, I guess. 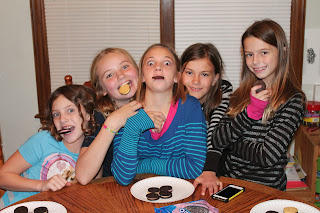 The next morning was more of the same until it was time to go roller skating.

There isn’t a roller rink in Our Little Town anymore.  It’s a convention center now, although they did keep the hardwood floors so they could always convert it back if they wanted to.  You have to go to the next town down to go skating these days, so that’s where we went.

And it was a good time.

They went around and around in the regulation counter-clockwise direction.  They played roller-skate limbo (one of Lauren’s friends won and received as her prize a pile of cotton candy that was nearly as big as she was). 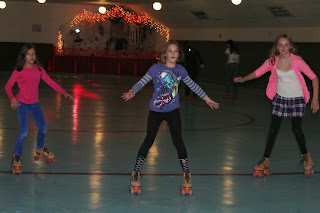 There was, of course, cake.  As befits her new status as a Doctor Who fan, Lauren requested a TARDIS cake.  And Kim delivered: 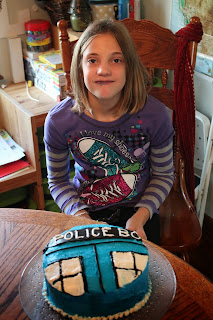 Is that not the best cake ever?  Of course it is!

Having filled them up with sugar we then turned them loose on their parents and sunk back into our own now-quiet home, ready to go for another year.

Her last binary birthday until she lives to 100!