Carving Out a Good Time

It should not rain on Halloween.

It can rain on Thanksgiving because mostly you’re indoors eating and hanging out with your family, although whether this makes the holiday more or less interesting depends in large part on how you feel about hanging out with your family.  It can rain on Christmas for much the same reason, though snow would be nicer.  But Halloween is one of those holidays that require you to be out and about.

Or, more importantly, kids need to be out and about.

Whatever the original point of Halloween was – and you can get a pretty good argument started any time you want to simply by asserting in a public place any one of the theories behind that point – it has become an exercise in having the neighborhood kids go from door to door collecting candy.  There are precious few occasions for this kind of random sociability in our current age of Stand Your Ground laws, so anything that puts a damper on it is by definition a bad thing.

Plus Halloween is a fun holiday.

The girls have gotten old enough now that we leave most of the prep work to them, and this essentially boils down to getting them to carve the pumpkins.  Kim and Lauren came back from a shopping expedition a week or so ago with two pumpkins that had clearly served as carriages in someone else’s fairy tale, and upon such broad canvases is art made. 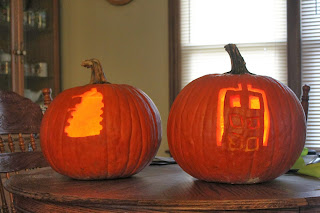 For those of you not up on your Doctor Who references, that’s a Dalek on the left (carved by Tabitha) and the TARDIS on the right (carved by Lauren).

Tabitha has reached the age where she would just as soon stay home and hand out candy, but Lauren still wants to go trick-or-treating.  Lauren has, however, reached the age where trick-or-treating with a parent is just Not Cool.  Given that most of her friends were either going out of town for trick-or-treating or staying at home and planning to use their time scaring the little kids who came by jumping out at them from behind things, this caused a momentary panic.  Fortunately she found a friend who was willing to go with her, and they are out somewhere even now shaking down the neighbors for candy. 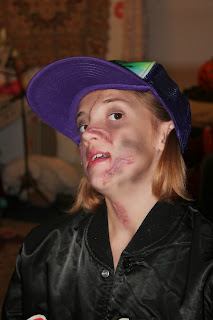 Even when it rains.

Now that is one fine-looking gangsta zombie!

I love the jack-o-lanterns. I saw my first Dr. Who episode the other night. It's never too late.

I never saw the show until March, but now I am a complete and shameless addict.