Where have I been these last couple of weeks?  Up to my hindquarters in alligators, trying to drain the swamp of my life, that’s where.

So here is a rundown of news and updates for your viewing pleasure while I continue to beat back the alligators and hope to escape this month unchewed:

1. We now have a fence.  It’s a very nice fence.  The guys who put it up were friendly and interesting, and they did a good job.  So far the Unmentionable Neighbor has not reacted to it in any way that I have noticed, which is all to the good.  Perhaps he regards this barrier between us as being as much of a good thing as I do.  Given the similar actions from his other neighbor, he is now encased on both sides with solid wooden fences designed to remove him from view – all that is left now is for his rear neighbor to follow suit.  You’d think he’d get the hint.

2. Having to teach the US Constitution during the current right-wing coup attempt is an interesting proposition.

3. I have now been to the Center Of The World.  It’s in New Troy, Michigan, in case you were wondering.  It said so, right on the sign as we were entering town, and it said so again on the sign as we were leaving the other side of town sixty seconds later.  The joy of a sphere is that you can pick any random point on its surface and call it the center.

4. We were in that area because it was time for my brother-in-law’s annual Halloween Bash, which is held every year on Columbus Day weekend so those who don’t have school on that Monday can have a more leisurely time of it.  It was its usual festival of fun – conversation, beverages and food for the adults; a Haunted Trail for the kids; and a bonfire for all and sundry. 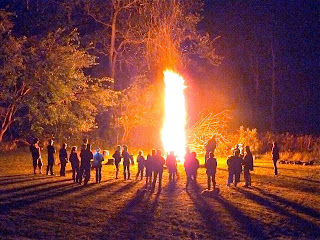 You can have a bonfire like that when you live on what is, officially, a wetland and it has just rained.  Trust me, nothing else is going to burn.

5. What was interesting about this year’s Halloween Bash is that the kids have now mostly grown old enough that we never saw them.  We pulled in, opened the door, and Tabitha and Lauren disappeared into a haze of swirling teens and pre-teens, surfacing only occasionally for snacks.  When we went back Sunday morning to say goodbye they didn’t even make it onto the property – we let them out on the road to join the pack and we collected them when we left.

6. Lauren has been having fun hornking around with her clarinet.  It makes a distinctive sound, and it is nice to see her enjoying the process of learning a new instrument.

7. I have now found four wheat cents in the last five weeks.  This is a new record.

8. One of the nice things about this time of year is that everything starts up again.  I don’t understand people who think the new year starts in January – clearly it starts in the fall.  School started last month.  This month the 4H year starts up again – we went straight from Michigan to a meeting on Sunday night, wherein awards were given for last year’s service (I got a nice certificate for helping out with the Drama Project), new officers were sworn in, and much food was consumed (you generally can’t go wrong with a potluck in Wisconsin, I have found).  This weekend the girls are back to curling.  And it’s finally cool enough for me to have my tea without breaking a sweat.

9. Cultural references inserted into lectures so far this semester:  1) The entire “wibbly-wobbly timey-wimey” speech from Doctor Who, during the introductory “What is history?” segment of all my classes; 2) This!  Is!  Sparta!, in my ancient history class; 3) the French knight’s taunting from Monty Python’s Holy Grail, in my US1 class.  If you can do it with an utterly straight face without pausing, it works really well.  Sometimes they get it.  Next semester I try for the “Generalissimo Francisco Franco is still dead” line from Saturday Night Live again.

10. At the current rate, nothing in my body will work by 2016.  At least this will spare me the next presidential election.
Posted by David at 9:33 AM