Hitting the Links with Clubs and Other Blunt Objects

I'm still working my way through the various things we got up to this summer.  It was a busy summer, but a good one.

Sometime in July we went golfing.

You have to understand the sheer weirdness of this fact.  My grandfather enjoyed golfing – it was one of the things that kept him busy and happy after he retired – but I’ve never actually gone a whole round of golf in my life.

A few years ago a friend invited me to play half a round with his friends one weekend morning – I’m not sure if it was the front nine, the back nine, or perhaps the middle nine with some left over on either end.  In any case there was grass and there were holes and we spent most of the morning trudging across the one to get to the other.  He even lent me some clubs, and over the course of the morning I eventually noticed that they were different, though what precisely those differences meant in practice I never did work out.  I knew this was going to be my last time with doing this with him when, about halfway through, he paused and slowly asked, “You played a lot of softball in your life, didn’t you?”

Apparently it’s not supposed to be the same swing.  Who knew?

So, we’re not golfers.  None of us.  Unless you count courses that have windmills and mermaids in them – those we’re pretty good at.

But our Swedish friends were visiting this year, and we had gone up to see them in northern Wisconsin while they were staying with other friends – Joe, Rachel and their family – and Joe golfs.  His daughter Monica golfs.  So we tried it.

It went about as well as you’d expect, really.  We had a good time, but the PGA Tour will likely not be calling us with invitations.  I’m still not sure what the various clubs are supposed to do that you would need such a variety.  It all seems profligate that way.

It was a hot and sunny day when we showed up to the golf course, and if there is one thing that is true about pretty much any golf course you’d care to name it is that there are very few trees in the middle of it.  They get pretty fussy about that, actually.  There were some on the edges for those who wished to stand by and observe, but if you wanted to hit the ball you were pretty much out there with no tree cover.  So there we ended up, in the sun, swatting away.

We didn’t actually try to hit anything into any holes – Joe understood that this would just be an invitation to disaster and likely one slow-moving enough to require our grandchildren to finish it – so instead we bought several buckets of practice balls and headed over to a hill overlooking a large field.  We spread out across the crest of the hill and began hitting the balls as far as we could.

There was a certain amount of earth removal in this process, but most of the balls managed to end up in the field most of the time and I count that as a success 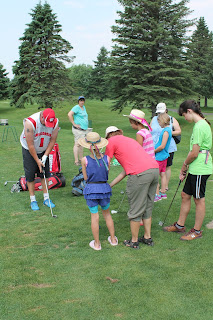 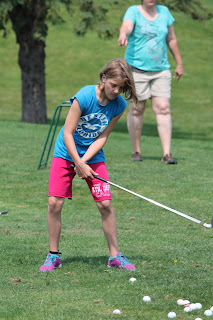 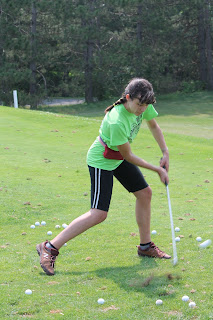 It turned out that among the four of us under my roof, by far the best at it was Lauren.  Granted this was not hard, but she actually did manage to get a few good drives off.  Tabitha and Kim were fairly game about it.

I think I’ll stick to windmills and mermaids.
Posted by David at 10:11 AM

In high school they made us do a couple sessions of golf in PE. All I remember is thinking that trying to keep one arm straight through an entire swing was the dumbest, most unnatural thing I'd ever heard of. Needless to say, your assessment of the game is pretty much the way I feel about it, too. Ick.

They never had us try golf in gym, for which I suppose I should be grateful. Not that there weren't a whole lot of other goofy things we did in gym, but so it goes.

I'm not sure how much of what I feel about it is "ick" and how much of it simply "fresh kale" - i.e. something other people seem to enjoy but which simply does nothing for me whatsoever.

It was actually kind of fun whacking away at the golf balls this summer, but a lot of that may have been the fact that nobody was trying to convince me to do it properly. I find that makes a big difference more often than it probably ought to. :)

Do the girls do ice hockey?

For as much of a hockey fan as I am, the girls really have not followed that path - they'll go to our local minor league hockey games and have fun, but that's about it.

Golf is an Irish joke on the Scots, and the Scots just haven't caught on yet.

I hit two kinds of balls in my gym class-- air balls and dirt clump balls. My hatred of the game stems from that class.