The trick to getting out of a 4H event in a reasonable amount of time is to schedule another 4H event directly following.

There is no charge for this advice.  You’re welcome.

It was Rabbit Fun Day here in Our Little Town, the day when the kids doing the rabbit projects gather together at the County Fairground to show off their rabbits and practice for the official show at the County Fair next month.  It’s a bit less stressful this way, and they learn how to handle the rabbits without the pressure of the formal event.  Lauren has been looking forward to this event for months, as it would be the first time she has had a chance to show her new rabbit, Milkshake. 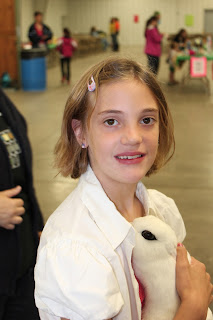 So at an indeterminate but rather too early hour this morning we found ourselves and Milkshake pulling up to the usual building over at the Fairgrounds – the same one we do the cat shows in, the same one we were in on Wednesday for the Pork Festival (giant tasty porkchops!  and cupcakes artistically frosted by our very own 4Hers on Monday!), the same one we were at Friday night helping to set up for the rabbit show, the same one that more and more I suspect I might as well just have my mail forwarded to and be done with the charade.

Fortunately it’s a low-stress operation, the Rabbit Pre-Show.  There are only about a third as many kids and half as many animals as the cat shows, and since rabbits are prey animals rather than predators they tend to be quieter and less prone to draw blood.

Milo came along too, even though he is not a purebred show bunny and could not officially compete.  But he’s a friendly beast – he’d make a good therapy rabbit on a college campus during finals week, really – and he helps calm everyone down.

Lauren dropped her bunnies off at a convenient spot and then went to the rabbit showmanship classes that occupied the first two hours of the event.  Kim and Tabitha settled in.  I went back out to the Cream Puff Guy who was having a sale near the dry cleaning place that we pass on the way to the Fairgrounds.  I came back with a box of cream puffs and eclairs – breakfast of champions!

Milkshake was the first rabbit to be shown, and the only Dwarf Hotot at the event.

On the one hand, the fact that he won Best of Breed is therefore not really all that surprising.

On the other hand, even a solo bunny isn’t automatically qualified for that award if he doesn’t meet fairly high standards – they’ll let the award go unclaimed if they have to – so it was a nice thing to win anyway. 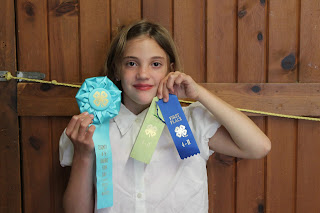 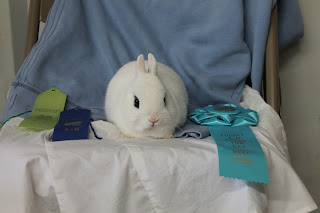 And then we left, because 4H Camp starts today and the girls had to be on the bus and ready to leave by a quarter to noon or so.

The fun never ends, here in Our Little Town.
Posted by David at 1:09 PM

Get that rabbit the crown he so clearly deserves.

Congratulations, Lauren! You and your bunny are both winners!

Great job! It's true, they don't give an animal best in show if it doesn't meet the standards and if it isn't shown well. So congratulations are in order. And that's a beautiful animal.