1. I actually got to sleep in twice this week, for the first time since, well, January.  It is a very strange thing to wake up, look over at your clock and realize that it is not actually earlier than when your alarm normally goes off.  I could get used to that feeling.

2. Kim’s brother Geoff is visiting us from San Francisco, which is always a lot of fun.  Yesterday we took him a few towns over to a restaurant that is famous for serving cheese sandwiches.  Because that’s how we roll.  Really – cheese sandwiches.  These were the food of my youth, essentially – cheese, bread, mustard.  Of course, here in Wisconsin you can get many different kinds of cheese on your sandwich, including limburger.  And if you add liverwurst to it, you will get what Geoff had.  Why you would want to do that, I do not know.  But you could. 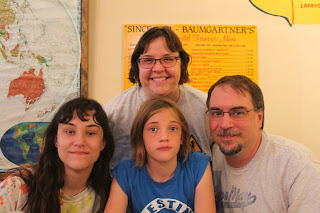 3. We also went to our local minor league baseball team’s game last night, since it was 4H night.  They actually won with us in attendance, for what must have been the second time in three years.  Score one for the good guys.  It was a well played game, and although there were a couple of hometown calls none of them really changed the complexion of the game any. 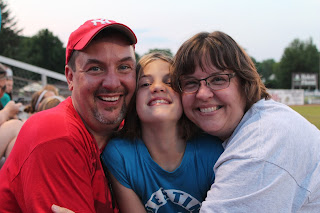 4. The girls made it safely back from 4H camp, despite Tabitha and her friend managing to deposit their canoe onto the river bottom (where, as far as we know, it remains, along with a grill and several other items of camping gear).  Well, those adventures make the best stories.  Lauren and Tabitha spent the better part of Tuesday telling us those stories, and then most of Wednesday sleeping.  So – successful trip.

5. We spent Sunday up at my in-laws for a Father’s Day feast.  There was much conversation and food, and it was good.

6. Tabitha made the local paper yesterday!  Granted, this is a fairly small town, but still.  They have a feature where the school art teachers submit works they think are particularly deserving and the paper publishes the ones they want.  And there it was!  A copy in the paper, the original in our dining room, one right next to the other.

7. Governor Teabagger (a wholly-owned subsidiary of Koch Industries) and his cronies, minions and lackeys have reached a new low this week by having a red-herring budget up for debate all week and then – in the dark of night – introducing the budget they wanted all along and ramming it through without debate or amendment.  It’s been fascinating watching the subversion of an American state from the inside by a radical extremist cult, but it does get old.

8. Every once in a while we sit down and try to figure out just what our schedule will be for the rest of the summer.  Then we go lie down.

9. My office here at home is actually quite a large room when you take out all the stuff that accumulates in it over the course of a semester.  This is good, since it will be pressed into service as a spare bedroom shortly.
Posted by David at 5:21 PM