It's a String Thing

Monday was the big concert down at Mighty Clever Guy Middle School.

At least it was big for us, as it involved all of the string musicians in their various orchestras.  This meant that Tabitha would be up there on stage with her violin at a time I could actually go see!  No night classes, no work commitments introducing other performers down at Home Campus, no aliens kidnapping me at the most inconvenient moments (or at least if there were they were aliens with time-travel capabilities who could put me back so that it never seemed I was away – you have to allot for these possibilities, after all).

We arrived rather early due to a combination of the fact that I generally like to get places early and the fact that when Tabitha told me she needed to be there at 6:15 she didn’t specify whether this was the deadline for her being there (as I interpreted it) or the earliest moment the orchestra leader wanted to see people arrive (as was, in fact, the case).  Fortunately it was a nice evening, we had just had a good dinner, and I could just hang out on the grass while Tabitha and Lauren chased each other around.  Where do they get that energy?

Eventually we all went inside to our respective stations.

Lauren and I stationed ourselves right up front, along with another friend who was there watching his daughter play, and we amused ourselves until it was show time.  They break these concerts out by grade - each grade has an orchestra, and they go up in turn from youngest to oldest - which left the seventh-graders in the middle.

They did a very nice job. 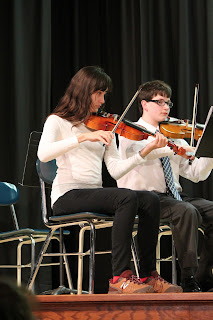 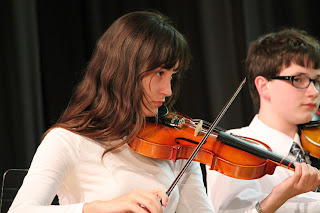 What was particularly notable about the seventh-graders was that they were far more cohesive than the other grades, as measured by all the musicians starting and stopping at the same time.  And they played their pieces with conviction so it was fun listening to them.

Between the seventh-graders and the eighth-graders was the Fiddle Club.

Once a week, all year long, Tabitha and a handful of other dedicated violinists would stay after school and practice their own songs for these concerts, and when the time came they arranged themselves in a semicircle – one conspicuously lacking a conductor – and they ran through their pieces on their own.

Such talent!  You should have been there.

Fiddle club also has a viola! He may be so outnumbered, but he is still there.

Tabby, you have the best violinist posture in these pictures. I wish I could have heard you! You'll have to play for us on Skype. Congratulations on a talented performance.
Love, Grammy