It’s been a busy weekend and we’ve still got one more day of it to go.

Friday night was Tabitha’s birthday party – the one where we invite her friends over instead of just family.  So a handful of 6th- and 7th-grade girls descended upon our house for the festivities, and festivities were had.

The easy part about birthday parties at this age is that they really don’t want much parental involvement.  You open the front door, tell them where to put their stuff, and watch them disappear.  Eventually you call them back into the dining room for pizza (the required food for all sleepover parties), and before they scatter too far you feed them cake.  Toward the end of the evening you gather them again into a central spot, lay out their sleeping bags, turn on a movie and let them wind their way down to sleep while you do likewise in your own bedroom.  Other than that, really, your main task as a parent is simply to make sure the house doesn’t burn down.  I can do that.

They seemed to have a good time, at least.  And they plowed through the cake – a four-layer tower we built to sop up all the extra frosting from the buche de noel.  Good times + sugar and fat = even better times. 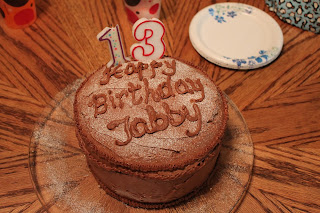 On Saturday morning we jacked them up early, fed them a hearty breakfast, and took them curling.

For those of you who live in warmer climates, well, you’re missing out.  Curling is like shuffleboard on ice, except at the Olympic level you get to wear pants that would embarrass a 1970s-era golfer.  You slide these big granite stones down the ice toward a target and score points based on how close you get, after which you eat, which makes everything good.  It’s a very sociable game – just right for this audience – and there was much amusement to be had.

And then, without even going home, we left for our big excursion around the state.

First, we got a new rabbit.

Lauren has been without a 4H-show-quality rabbit since Hazel succumbed to the heat last summer.  Milo, for all his super powers, is not a pedigreed bunny, which strikes me as an odd concern to begin with, but there you go.  The rabbit people get very serious about that sort of thing, however, far more than you would think anyone could get regarding a creature as ridiculous as a rabbit, and they make the rules.  So if Lauren was to continue exhibiting her rabbits at the 4H County Fair, we’d either need to forge a pedigree for Milo (“Says here his grandfather was a wolverine and his mother once singlehandedly put out an oil-rig fire by throwing carrots at it”) or get a new rabbit.  The new rabbit seemed simpler.

Lauren has been jonesing for a Dwarf Hotot rabbit for months now.  Show quality Dwarf Hotots (pronounced “HOE-totes”) are the Theda Bara of the rabbit world, with plain white fur except for a ring of black around their eyes that makes you think they should be vamping around in a Flapper dress and drinking bootleg gin.

It turns out that there are not that many Dwarf Hotot breeders in Wisconsin, and many of them had also suffered serious losses in last summer’s heat (good thing the climate’s not shifting, because otherwise, you know, I’d be worried…).  But there was one out toward Fond du Lac who finally had some to sell and since we were going to Grandma and Grandpa’s anyway and it wouldn’t be all that far out of the way to get there, we decided that Saturday was the day. 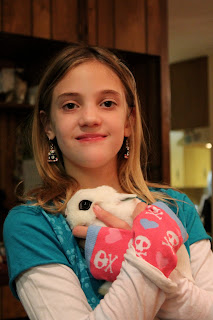 He’s almost full-grown, and so far has been remarkably friendly for a breed that comes with all sorts of cautions about their aggressive nature.  The cats have been curious, and Milo has checked him out thoroughly.  No incidents have been reported.  Mostly Milkshake just huddles, or when placed on the floor, stands up on his hind legs and tries to get his bearings in such a new and strange place.  I can sympathize with that.

We look forward to good times with Milkshake.

From there we went to Grandma and Grandpa’s for the last stop on our Christmas tour – Ukrainian Christmas, a festival of pierogies, sausage, family and (this being Wisconsin) the Green Bay Packer playoff game.

There was an intense amount of good food, as there always is on these occasions, and then it was time for gifts.  We’ve mostly downplayed the gift thing in recent years, at least for the adults – but the kids, well, that’s one of the great pleasures of life.  There was much rejoicing. 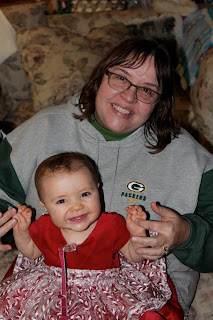 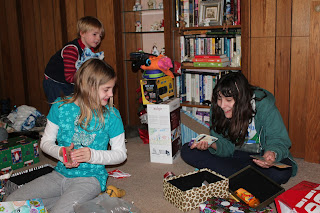 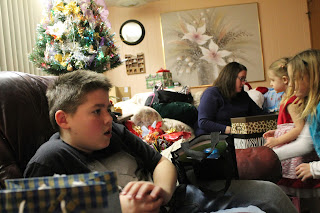 And then it was time for The Game.  Every year the adults do this, no matter which side of the family we’re visiting.  You buy two gifts – one nice one, one goofy one – and put them in six piles.  You roll a die to see which pile you can pick from, and eventually you end up with two gifts that are different from the ones you came in with.  And then there’s five minutes where a couple of pairs of dice are passed around, and if you roll doubles you can switch with someone else. 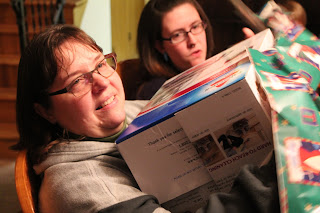 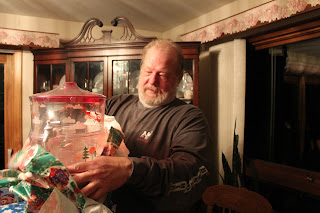 There was much commentary, as there always is.  Because in some sense that is the point of The Game, after all.

Eventually we had to go home, though.  All of the gifts were distributed, the Packers had won, and there was a long drive ahead of us.

One more Christmas in the books.  It was a good one.

I hope that says what Google Translator says it says ... ;)