I’ve never been a great believer in sympathetic magic.

When I was an undergraduate, the university ran a fundraiser to benefit famine relief programs in Africa.  The deal was that you would skip a dinner at the dining hall and they would donate the cost of that meal to organizations who would use the money to feed starving people.  I figured this was a good cause and signed up.  The other part of the deal was that you were supposed to skip the meal entirely yourself, which I figured was nonsense.  I already knew being hungry was a lousy way to spend time, and I didn’t see how my being hungry was going to help anyone else feel more fed.  I was happy to donate my meal money to the cause, but the sympathetic magic part was a non-starter.

I went out for pizza instead.  That way the total amount of hungry people in the world actually declined marginally that night instead of remaining constant by swapping me for them.

This is why the idea that I should spend my evening hobbling around in high heels to benefit programs aimed at preventing and responding to domestic abuse initially took some getting used to on my part.  You see, my being in pain is not going to alleviate anyone else’s pain.  That’s sympathetic magic talking, and that’s nonsense.

But nevertheless, it helps anyway.  Strange how that works out.

Sometimes you have to do something that grabs people in order to raise money to do necessary things.  It’s not always as easy as switching where you’re going to eat and letting one meal’s worth of money that you’ve already paid for go somewhere more important.  Sometimes you have to raise that money from the ground up.

Because sometimes it’s worth a little pain to shine a spotlight on a whole lot of bigger pain.

Yes, wearing high heels hurts.  If I am ever an old transvestite, I shall wear purple flats.

But if you know the toll that domestic violence takes on women in this country, then you know what pain really is.  Here’s a hint: it’s not shoes.  It’s beatings.  It’s killings.  It’s things that have no business existing in a civilized society, things that should by rights disqualify perpetrators from any Eighth Amendment protections against cruel and unusual punishment.

It’s things that are all too common.

So once again, I put on a pair of painful high-heeled shoes and took part in the YWCA’s “Walk A Mile In Her Shoes” event, with 139 other similarly minded men and our friends, spouses and children.  We raised over $57,000 to help the YWCA deal with the mounting toll that that sort of thuggery takes on our community, our friends, our fellow citizens, $260 of it from people who had donated money for me to walk.  We stood in the open air and declared that this sort of thing will not be tolerated, not in our town, not by us.

Because sympathetic magic might be nonsense, but putting yourself out there for a good cause is just plain sense. 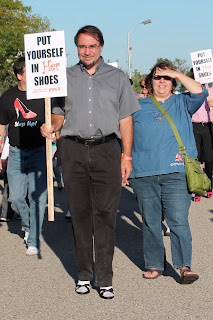 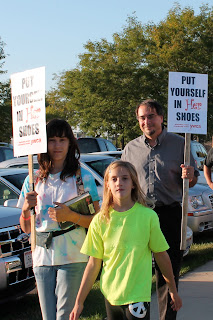 Thank you for Getting It.