On the Campaign Trail

It was Campaigning Day down at Not Bad President Elementary today.

NBPE has its own Student Council, which I find rather advanced, really.  I don’t recall having one of those until junior high, though it is entirely possible that we did have one at my old elementary school and I just never noticed.  There were a great many things I did not notice back then.

But Lauren noticed.  She loves the whole idea of Student Council, and has even served on it before.  Mostly they determine the Theme Days for the year – the “Wear Your Pajamas” days and so on – and they get involved in other school projects.  I like that Lauren thinks this is a worthwhile use of her time and that she is willing to get involved with her school to try to make it a better place.

This year her teacher decided that there would be a real electoral process rather than just a simple class vote.  So she had the kids who were interested in running pair off so they had a running mate – Lauren ended up with someone named Makayla, who seemed nice when I met her today.  There was then a primary election, which whittled the field down from eight pairs to four.

Each of the eight remaining candidates had to do some serious work after that.

They created their own brochures, using appropriate publishing software.  They made campaign posters.  They set up all kinds of treats for potential voters, because it is never too soon to learn how politics really works. 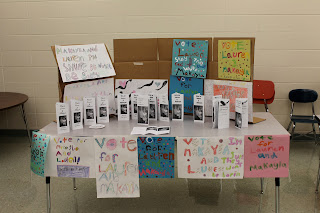 And they wrote speeches.

Lauren spent several days working on hers, polishing it up and lengthening it out to the declared minimum length, and today the 4th grade and many of their parents gathered in one of the side rooms at NBPE to hear what she and her fellow candidates had to say.

She and Makayla went first.

Lauren did a marvelous job, speaking clearly and correctly and letting us know in no uncertain terms why she felt you should vote for her.  This was particularly impressive since she volunteered to be the first speaker, and thus had nobody to imitate – it’s all her. 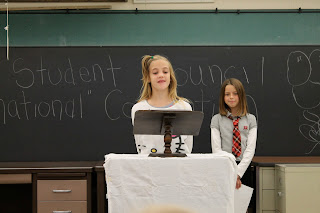 Makayla then upheld that tradition with a fine speech of her own, and after that the rest of the candidates – including the daughter of a Home Campus friend of ours – gave their speeches as well.  Friends, political oratory is not dead!  It lives and breathes in the youth of this great land, and especially here at NBPE!  They all did quite well.

The voting is tomorrow.

Vote for Makayla and Lauren!  It won’t be borin’! 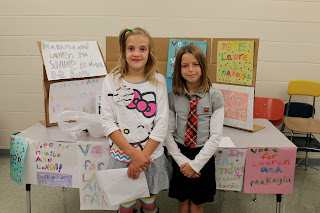 She's got my vote!

She won! Yay, we have a winner! Tabby Typing.