In Which I Marry Two People

To each other, silly.

Some things that you do require a certain amount of explanation.  And some things require a whole lot of explanation.  The fact that I spent a portion of my evening officiating a wedding – performing a legally-binding and state-recognized ceremony of marriage for a couple of friends of mine – is definitely one of those latter things.

I have been an ordained minister in the Church of the Latter Day Dude for almost five years now.  For those of you unfamiliar with The Big Lebowski – as was the teenaged clerk at the local Wal-Mart last night when I was trying to find a copy of the movie, and get off my lawn you whippersnapper – the Dude was just trying to get through the day when a case of mistaken identity led to thugs breaking into his residence and stealing his area rug.  Out of this set-up came a cult movie, an annual festival, and an entire religion (the LDD Church, as I like to call it).  As near as I can tell, the theology of the LDD Church essentially boils down to “try to be nice to your fellow human beings.”  I can buy into a church like that.

Plus, you can’t beat their motto: “The Dude abides.”

At some point a while after that I remember calling the County Clerk here in Our Little Town to see if this actually qualified me to perform weddings.  “I think so,” she said.

Earlier this year my friend Angie found out that I was an ordained LDD minister and she asked me to officiate at her upcoming wedding.  She and Kevin had each been married before and were looking for something short and fun this time around, something that would see them wed without making anyone crazy.

How could I resist?

We met sometime last month to go over what she and Kevin wanted, and I promised to get a definitive answer on the issue of whether I was in fact empowered to do this.  For all the light-heartedness of the whole LDD Church thing, the fact is that this is someone’s wedding day and you want to do it right.  Rituals are important.  Legal complications are even more important, particularly their avoidance.

My legal status turned out to be more complicated than I thought.  Conversations with various family law practitioners here in Wisconsin really didn’t shed much light on the subject – none of them agreed with any of the others – so I went back to the County Clerk to ask her in person.  She’s the one who issues the marriage licenses; she should know.  With the text of the state statute in front of us, we eventually worked out that if the LDD Church were a registered 501c3 non-profit then that would likely satisfy Wisconsin state law about my status.

It turns out they are not.  I had an interesting conversation with the folks at LDD Church headquarters about why requiring this status did not, in fact, infringe on their First Amendment freedom of religion, since the question was not whether they counted as a real religion but whether I was a fit person for the state to delegate legal authority unto, marriage being a civil contract in the United States.  I don’t think I convinced them.

Fortunately, the County Clerk had already recommended a backup plan for just this eventuality, and I became an ordained minister of the Universal Life Church.  It has more or less the same theology as the LDD Church without the overlay of White-Russian-inspired rhetoric and their clergy are already recognized by the State of Wisconsin as being authorized to officiate at weddings, which meant I would be good and legal for this.  The County Clerk herself has performed weddings under this authority, after all.  Since my basic take on Christianity is largely the idea that we should be better to our fellow human beings than we generally are, I decided I could join the ULC without fear of hypocrisy.

And since the ULC recognizes the common striving toward divinity that is in all faiths, I figured I could still perform my LDD ceremony under their banner.

It was a simple and elegant ceremony.  I gave a short homily, entitled “Abide With Each Other.”  They wrote their own vows.  There was a nice unity ceremony symbolically joining the two families into one.  And then it was over, and Angie and Kevin were married. 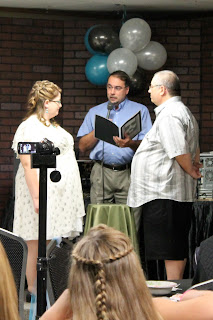 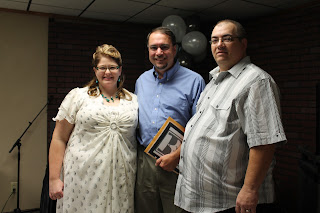 I wish them all happiness.

I have always loved weddings.  They are such hopeful times, especially when people remember that the focus is on the marriage and that this is just a ceremony to mark its beginning.  Yes, it’s theater.  But it’s good theater.

And if you find the right costar, you can extend your run forever. 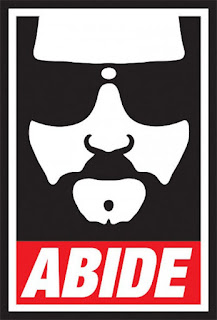 How wonderful that you could do something like that for your friends.

Dave, you have that wonderfully benevolent Mr Rogers look about you. Well done - both for the intention and the action. And the bride looks stunning!

I bet you don't even roll on Shabbos.

How cool to have a friend be the officiant.
At our wedding, we had the husband of a BMC friend officiate. Took the stress off of us and onto him.

Stories like these is why the Universal Life Church is something that can be used for good. At the request of their father, my friend was able to perform a wedding ceremony for his brother, and my dad couldn't be happier that day. Thanks for sharing this story, I bet there are more people that have done something special like this!