A Day Surrounded By Cats

I learned a few things today.

Orange is red. Grey is blue. Stripes are mackerels. Circles are bulls-eyes. And you can never have enough dill pickles as large as your head.

The things you learn at cat shows.

Today was the big 4H Pre-Fair Cat Show down at the county fairgrounds. This is the “fun” show – the one they hold a month before the serious show, mostly to get you and your cats used to the idea of cat shows and to see if you really, really want to do this sort of thing again.

Imagine, if you will, a building. It’s about thirty feet wide and maybe a hundred feet long, essentially one big uninterrupted space. Give this building concrete floors and metal walls, and make sure that there isn’t anything in it made from any material that could possibly absorb sound. Now fill it with wire cages on tables and stuff those cages with sixty-five stressed out cats, all of whom are desperately unhappy about being there and deeply ticked off at their neighbors, whom they can smell but not see until they are removed from the cages for whatever reason, whereupon the symphony begins in earnest. Now surround those cats with their owners – perhaps fifty children, ranging in age from six to sixteen with the average being somewhere around eleven or twelve - and a host of parents, grandparents, and assorted hangers-on.

Don’t forget the announcer, holding a microphone and standing behind a speaker that is roughly a yard square, earnestly imploring the owners of Cat 37 to bring it to Ring 3 right now or lose their chance at being judged.

If you can handle this at the “fun” level, then you can consider doing it again.

We didn’t have a bad time of it, actually.

Last night Tabitha and I spent an hour helping to set the place up, and then we arrived at 8am to get registered. Tabitha quickly got Mithra and Midgie set up in their respective cages, and I went off to the food booth to try to get that up and running – an interesting task, considering how little specific instruction I got. On the one hand, how much instruction do you need? On the other hand, some would have been reassuring.

Midgie and Mithra seemed to settle in fairly well, all things considered. Tabitha did a nice job of making them at home in their cages, and they quickly figured out that the devil they knew (each other) was less problematic than all the other demons surrounding them. 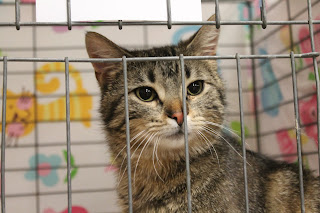 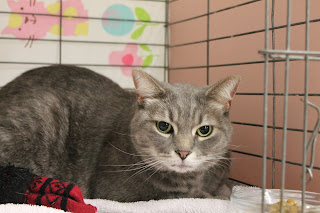 And then it was time to be judged.

First came the Showmanship part. You’re only allowed to do this with one cat, and given that Mithra desperately hated it last year Tabitha decided to try it with Midgie this year. This turned out to be more complicated than we imagined. Midgie was a bit freaked out by the whole process of standing in line and waiting her turn (not unlike a number of people I know, many of whom have business careers) and ended up bolting at one point. Lauren tracked her down (only owners are allowed to approach runaway cats, which anyone who has ever tried to pick up an unfamiliar and highly annoyed cat can understand) and the rest of the interview went well.

Each cat was judged in all three of the rings over the course of the day. In the Fun Ring, Midgie was crowned the “Clever Cat” and Mithra the “Luxurious Cat.” There was more serious judging in the other two rings, though, and Midgie actually got a call-back from the judge in Ring 1.

She was awarded a medal for being the sixth best short-haired cat in the show, according to that judge. We were quite proud. 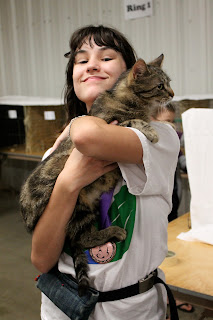 Of course, neither she nor Mithra made it into the other judge’s top twenty, but so it goes. Tabitha got to show a medal-winning cat, and that’s a good thing.

We finally got home around 3pm, poured the cats out of their carriers, and let them get back to the serious business of whatever it is that cats do during the day.
Posted by David at 8:34 PM

Clearly a pair of excellent and pretty cats. I approve and applaud.

"...whatever cats do during the day." Sleep. I have it on good authority. Of my two, this weekend Oreo decided that being a pillow under the blanket on the bed in the guest room was just about perfect. When I found her and played with her through the blanket, she changed her domicile to the big cardboard box full of miscellaneous clothing and shoes, and almost completely closed up at the top. I almost wasn't able to find her. When you lose a cat in a 2-bedroom house, frantic is the word. She, however, was perfectly content, because she was finally where humans couldn't visit indignities upon her person.

I discovered cats when I was very sick -- and sleeping twenty hours a day. My feline friends approved.

Oh, to have an apartment big enough to dilute the cats' odour -- because you have to have two. I can dream. One day.