Of Thee I Sing

As it is Spring Break here in Baja Canada for both us and the girls – the first time our Spring Breaks have coincided since Lauren started school – and since Kim and I are forbidden to do any work today under pain of administrative exile and mountainous paperwork should we be discovered trying to be productive, we figured we’d go up to Madison and participate in some democracy.

The crowd was fairly small, as befit a Monday afternoon – most of them were people similarly forbidden to be at work and therefore free to express their views to their elected representatives. There were a couple hundred of us, all told, and we marched around with our signs again, to a fairly appreciative audience it must be said. This crowd was a bit more academic than most, so they got my joke. Of course, half the fun of an obscure sign is explaining it to people, and I have enjoyed doing that over the last few weeks. So it goes both ways.

After a bit we went into the Capitol, which has descended into the welter of paranoia that defines the American condition these days – despite having exactly zero arrests for violent offenses over five weeks of protest involving hundreds of thousands of citizens, Governor Teabagger (a wholly-owned subsidiary of Koch Industries, Inc.) and his cronies, minions and lackeys have ordered the installation of metal detectors that the citizens of Wisconsin must now pass through to gain access to their own Capitol building. It’s all a painfully ineffective thing, if security is the actual aim, but it does do an effective job of reminding the citizenry of how little control we have over the government that supposedly represents us.

But the charade went quickly and then we gathered in the Rotunda, mainly to sing protest songs.

But unless you’ve actually done something like that, you really can’t understand the power the human voice has when lifted up with its fellows. There’s a reason why protest songs exist and continue to be sung even in this technological age – they speak to things beyond mere individual grievances, to our aspirations, our hopes, and our dreams. Lift up your voice and sing, oh people, until the heavens quake and the afflicted earth is healed.

It’s even better in harmony.

Eventually we cycled through most of the little book of songs that the organizers of today’s rally had for us and we went back outside and back to the spoken word, which for all its limitations is still better than silence. 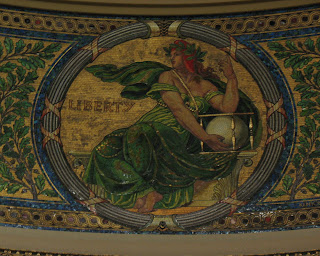