Further Reports from the Front Lines of the Teabagger War on America: The Protests Continue

They thought we’d go away.

When Governor Teabagger (a wholly-owned subsidiary of Koch Industries) and his cronies, minions and lackeys shoved the union-busting bill through the Wisconsin legislature last week in a blatantly unconstitutional maneuver worthy of the most primitive petty tyrannies, my guess is that they thought they’d won. That the protests would come to an end now that the battle was lost. That the people of Wisconsin would cringe like whipped dogs in the face of their power and accept that they no longer lived in a democracy.

The battle may be over, but the larger war continues on.

One hundred thousand citizens – citizens, mind you, not subjects – showed up at the Capitol yesterday to explain to that petty dictator what democracy looks like and to demonstrate just how misinformed Governor Teabagger (a wholly-owned subsidiary of Koch Industries) and his cronies, minions and lackeys were. There were farmers on tractors. There were firefighters in uniform. There were teachers. There were students. There were people from across the state and from across the social divisions that usually keep us apart, united in favor of the rule of law, the rights of the middle class, and the future of both Wisconsin and the United States. 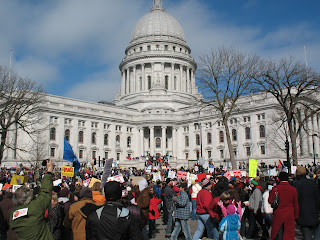 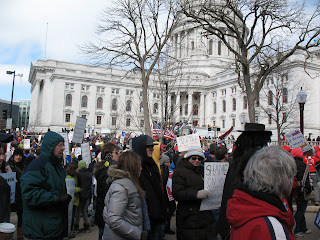 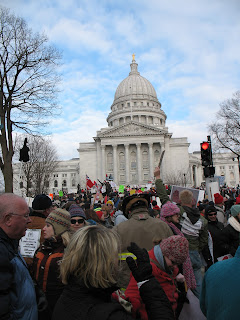 We were there. Of course we were there. What choice did we have? When the foundations of American democracy are threatened by the authoritarian few, the only thing responsible citizens can do is witness, protest, and make their voices heard.

We drove up after lunch and, after a good half an hour looking for a parking place, we marched up to the Capitol, where a sea of citizens were already circling the building in a slow procession of democracy in action, waving signs and chanting. We managed to make it once around the Capitol in the two and a half hours we were there. It was that crowded. 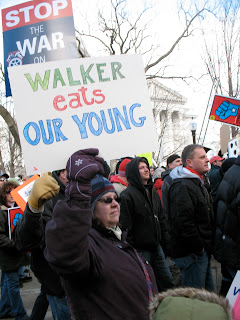 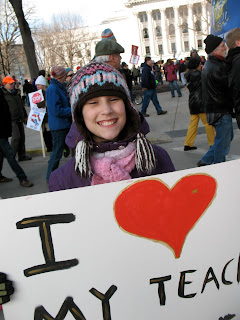 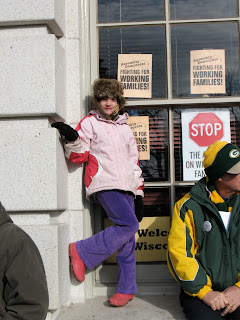 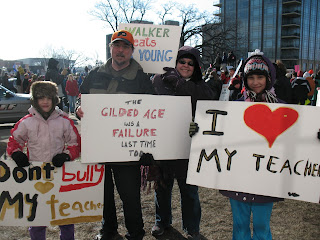 Part of that was because we stopped about halfway around to listen to the returning Democratic Senators speak. They were appropriately angry at what was done to Wisconsin in their absence, and at the arrogance and abuse of power that caused them to be absent in the first place. They lifted up their voices in calls to action – to recall Governor Teabagger (a wholly-owned subsidiary of Koch Industries) and his cronies, minions and lackeys through the ballot, to stand firm in opposition to the destruction of Wisconsin’s values and history, to be true Americans. And the crowd responded with cheers and chants. 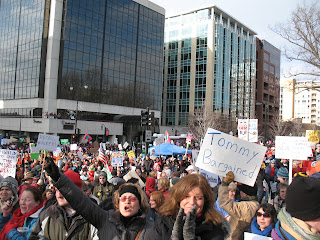 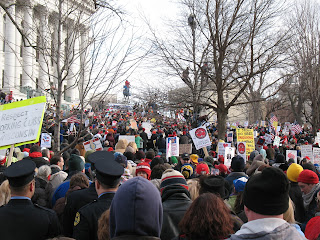 It must be said that this is perhaps the politest mass rally in human history. Listening to one hundred thousand people chanting “Thank you! Thank you!” to their Senators, to uniformed firefighters, to the police, to the farmers, to all who stand with them – that is not something you hear at most rallies. There were children everywhere, and nobody felt this was inappropriate (though there were occasional calls for lost parents to come to the microphone to be reunited, as one often gets in large crowds like this). In the crush of people there was no pushing, no shoving and no verbal abuse that I encountered.

And according to today’s paper, there were no arrests.

Consider that.  Consider what isn't there, and how important that is.

On the way off the Capitol grounds we stopped at the Episcopal church on the corner by the Capitol to warm up a bit – it had been a blustery, grey 33-degree day, something that did nothing to slow down the crowds at all. It was a good way to pause and reflect as we warmed.

As we walked back to our car we were repeatedly serenaded by car horns rapping out the distinct staccato rhythms of the most popular chant of the month’s protests: “THIS is what democracy looks like!”

I hope those in power are listening. 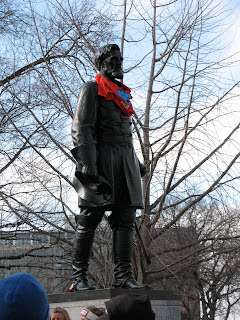 Dave,
Thank you for putting a face and a voice to this battle for all of us who could only be in Madison in spirit. Walker believes that he has a "silent majority" on his side ... but does he realize that for each of the 65,000+ "loud minority" that there are many, many more who are quiety supporting their teachers, police, firefighters, nurses, librarians etc... and we are proud of those who are making our opinions known in Madison? We may not be in Madison, but we're ready to mobilize on election day. It's amazing how loud my voice will be on that day.

You're welcome, Jamie - and I thank those who have carried the protests when I myself have not been able to go. Walker may believe what he wants, but reality is not obliged to follow his speculations.