Tabitha comes from a long line of people who run in circles.

When I was in high school I ran track for a season and a half, before the coach cut about half the team one day. We were never sure why, as a group, but I can't say it crushed me, not being the star of the team even in my fevered imagination. I was a "c - heat" sprinter, one of the extra guys too fast to ignore and too slow to win anything, though I was quick off the mark. If there had been a 4-meter race, I'd have been state champ.

Kim also ran track back in her high school. They took one look at this 5' 3" woman and said, yes, folks, here is our hurdler. She also ran unimpeded races.

Grandpop was another hurdler, back in the day. 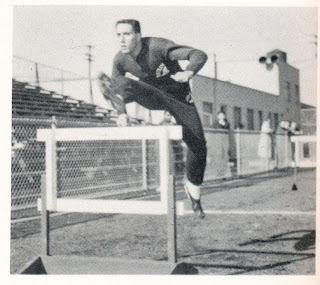 I've always been impressed by people who could do that. As a friend of mine once put it, "It's bad enough they make you run all that far, but then they put things in your way."

Today was the city-wide fourth-grade track meet, and Tabitha was entered into several events representing Not Bad President Elementary. So we trekked down to the town football stadium and settled in to watch our girl give it her all.

It was a beautiful day, bright and sunny, and not as hot as it had been recently, though after a few hours sitting on metal benches facing the morning sun it did get a bit warm. I now have sunburned knees, which is not something I get to say very often. It's hard to imagine a context in which it would naturally come up, in fact.

Not long after we got there the buses carrying the NBPE team came and the place was suddenly filled with buzzing children wearing vocal-yellow tee shirts. It certainly made them stand out against their competitors, who were attired in more sedate colors such as red, blue, and orange. They gathered out on the track in front of us and sang the University of Iowa fight song in honor of their departed gym teacher, a UI grad. I had never heard that song before, not even when I was a student there.

And then it was down to business!

After you haven't done it for a while you forget the barely controlled chaos of a track meet - the milling athletes, the droning announcers trying to get people to where they need to be, the incessant gunfire from the starter's pistol, as if you're in downtown Baghdad. It was an entertaining morning, with all of the runners doing their best and getting cheered on from the sides.

Tabitha's first event was the long jump, and here she scored her greatest success - taking second place overall in this city-wide event! She got a nice red ribbon and the admiration of her parents and friends - she's already exceeded my win quota from my entire career - and then she moved on to other events. 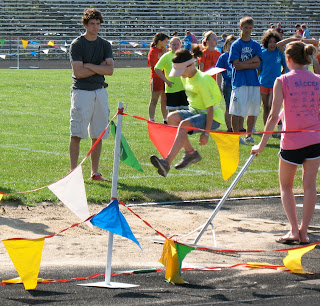 She competed in the frisbee toss and the fifty-yard dash, both events featuring wild excitement all around. 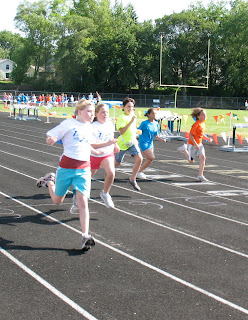 And finally at the end there was the 4x50 relay, which took place on the infield - conveniently marked off in yard lines already. They lined the teams up from sideline to sideline - there must have been a dozen teams in each heat - and let them rip.  Chaos doesn't begin to describe what happened next, but they had a good time running and (speaking as someone who was single-handedly responsible for almost three hours of team baton practice in my ill-fated track career) I was impressed with the baton passes. They did a really nice job.

It was a great morning.

Congratulations, Tabitha. We're proud of you.
Posted by David at 10:01 PM

Yay Tabby!! Great job!! those long legs are doing well! To Dave - that picture of Dad was tucked into my vanity mirror through most of high school and probably later. Thanks for the good memory!