I'm not doing well with technology these days.

Oh, the new microwave is just wonderful. We probably should have taken a sledgehammer to the old one years ago, now that we know how great the new one is. That's not the issue.

The issue is a DVD. Or, more properly, how to copy one. This is not a commercially-available DRM-protected DVD that I would probably be hounded unto the ends of the earth and well into whatever purgatory I end up in by copyright lawyers intent on extracting their fifteen cents in royalties - no, this is a DVD that I made on my own camera. You would think this would be relatively pain-free to copy, but then you would be wrong.

I have to copy it because in its current form it won't play in either of the nice new computers that we ended up with over the last year or so and I need it to be in a more congenial form. This is not because of any software difficulties but because the camera records on mini-DVDs, which are about as big across as most coffee mugs, rather than the normal sized DVDs, and the DVD slot on the computers is vertically-oriented rather than horizontal, so you can't just put a small disc in and expect it to work. It will gum up the computer, causing it to grind, smoke, judder and otherwise void its warranty with maximum prejudice and minimum recourse. So, my task is to find a way to copy it onto a big disc.

Score one for the engineers. I'm sure the vertical slot looked really cool on the blueprints.

But I'm working on it, because copies of the Not Bad President Elementary performance of The Granny Awards are not easy to come by. 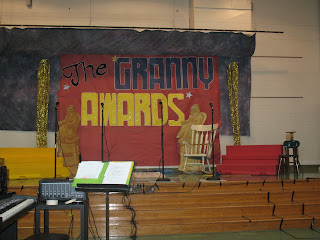 The Granny Awards are pretty much exactly what they sound like they would be - a parody of the Grammy Awards, only starring fairy tale characters. I haven't seen the Grammies since ... well, never, not even when I actually recognized the names of the bands they were giving those awards to. But the Grannies? This I had to see.

Tabitha tried out for this sometime in the spring and won the part of Little Red Riding Hood, which required her to attend rehearsals after school and Kim to craft a bright red cape to go with her costume. There was a lot of work gone into this, and it all came together on Wednesday. 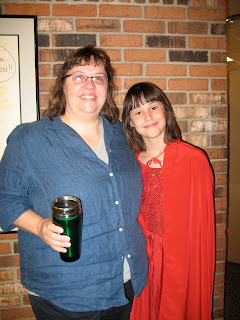 The show started at 9am, because this is rather off-off-Broadway and that's how we do things here in the nation's tender midsection. There was another showing at 1pm for the parents of 5th-graders. Two-a-days, just like the pros.

It was actually a very enjoyable show, full of sight-gags, actual comedy, and the musical stylings of most of the upper two classes at NBPE. Tabitha's scene came toward the end, and it must be said that she nailed it - a real trooper, she is. 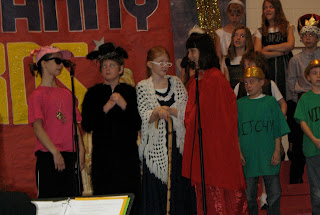 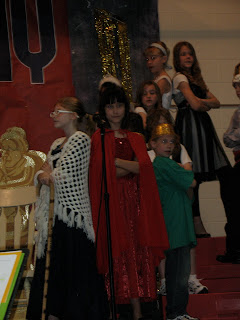 She also knew all of the other lines, and we could see her in her spot in the chorus reciting along with the other actors while she waited for her chance in the limelight. So if a freak dodgeball accident had wiped out half the cast, the show could in fact have gone on.

It was a great show, and we are very proud of Tabitha for her part in it.

And now I'm trying to figure out how to spread the good word to the grandparents. Someday.
Posted by David at 5:10 PM

And see how elegant the daughter, and how rumpled the mother? Just as it should be. Congratulations, Red!
sterse