A Bridge to the Future

Last night was Bridging Night over at the Daisies. This is what Girl Scouts call their graduation ceremonies, and really it's a nice little metaphor. Graduation and commencement are all about leaving one place but not really about landing in another - that's up to you. Here's your diploma, what's your hurry, don't let the door hit you as you leave. But bridging implies that somewhere on the other end is a place for you. This is yet one more reason why the Girl Scouts are better than real life.

Lauren has been a Daisy for two years now, and it was time for her to move on to the big, exciting world of Brownies. So we wrapped her up in her bright blue vest and headed off for Greatest President Elementary, there to bridge.

These ceremonies are nice, simple and short - key qualities for events scheduled on hot, muggy days in elementary school gyms. The parents and siblings gather in the audience, having deposited all manner of treats in the school cafeteria for after. The scouts parade in - and there were a lot of them on this night, since not only does Lauren's troop of Daisies number around three dozen but there is also a Brownie troop that meets at the same time and they were there too. There are a few words from the troop leaders - brave women all.

Then each girl walks across the bridge and underneath the raised arms of the other, nonbridging girls, to receive her certificate.  At that point there is an explosion of camera flashes trying to capture the moment - unsuccessfully, it turns out, because it happens at warp speed (they redo it later for the parents to take pictures that are in focus) - and then the cycle repeats for the next troop. 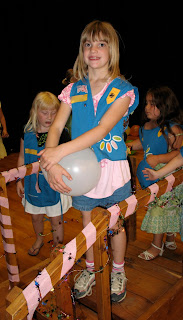 And then there is food - lots of it, mostly sugar that has been dyed colors not found in nature - and a fair amount of energy being burned off through motion and noise. 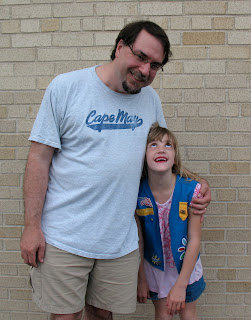 Congratulations, Lauren! You are getting so grown up! Love you!
Grammy

Were there daisies in my day? Aren't they relatively new?