We decorated our Christmas tree tonight.

This was harder to do than you might imagine, since it meant finding a space to put the tree into. Everything has to be somewhere, and in a house with two children, an optimizer constantly seeking to upgrade everything whether it needs it or not and a packrat unwilling to get rid of the old stuff simply because it's been optimized, even when it well and truly needed it, there aren't a whole lot of somewheres to go around.

Normally this wouldn't be too much of a problem - we're used to it, after all, and we've developed routines as to what stuff gets stashed where until such time as it can come back again into our lives sometime in January or February, whenever we can get the Christmas tree back down. But this year Christmas has also come on the heels of a Household Project of some long anticipation. Loooooong anticipation. Long enough that we do sometimes wonder why it ended up happening now.

Kim has long despised the closet in our mudroom - the entryway at the front of our house that would hold all the muddy boots, warm clothes and other outerwear if we ever actually entered the house that way. Does anyone ever use their front doors these days? We don't. The garage is out back, therefore we come in through the back. The only reason we have a front door, other than the sheer fact that it came with the house, is to collect the mail.

Nevertheless, there is - or was - a closet there.

And after thirteen years, it was time for it to go.

So last week our neighbor Adam - he of the window project - came over and removed the closet. The next day his electrician buddy rewired the mudroom so as to avoid dangly sparky bits and allow for the exciting possibilities of a) turning on the lights again, and b) adding new "track" lighting in the future, presumably because a room the size of a walk-in closet needs more lights. Because you know it does.

Unfortunately, Adam's plasterer buddy has not materialized to put the wall back where the closet used to be, although we did prevail upon Adam to insulate and put up some plastic now that we're covered with over a foot of snow and the air temperatures have dropped below zero. So we're mostly warm again, if unplastered.

Now, in most circumstances this would be a minor issue - some extra clutter here and there, and who can tell, really. But as noted, we were in need of a Somewhere into which we could put our Christmas tree.

So today I hauled most of the clutter out of the living room and found somewhere to stash it in our already clutter-intensive basement. Another problem for another day. And then I hauled up the fake tree that we use during odd-numbered years, and set it up.

And oh, such joy you have never seen.

The wonderful thing about having kids who are older is that they can now decorate the tree entirely on their own! You haul up the boxes of ornaments (and we have enough ornaments for several trees these days), set aside the particularly delicate ones (such as Kim's favorite - a spun glass lobster trap, complete with lobster, that we picked up in Maine when I was working on my first dissertation), and let them have at it.

They did a creditable job. 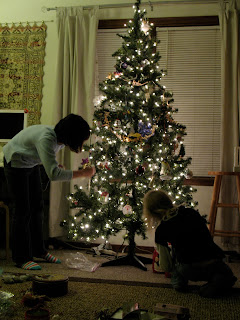 They also found the bugle that I've been hauling around since I was in college. We use it as a bit of decoration underneath the tree, as I am sure that somewhere in the Bible it mentions a bugle, probably in the Book of Unmentionable Acts. That's what I used to use it for, anyway. My dorm was located across the street from any number of fraternities, at least one of which would regale me with bad music until long past even my bedtime on most Saturdays. So I'd bugle back at them on Sunday mornings. They make noise, I make noise. It seemed fair.

Last year we made the mistake of teaching the girls how to make noise with it, and they were eager for a repeat. 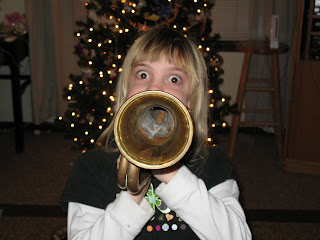 When are you going to look for a publisher? Unmentionable acts, that's great. Hey, am I the only commenter here?

Well, you're the only commenter on this post so far, but there are a few people who chime in now and then.

Only problem with the bugle picture: you can't quite see the bulge in Lauren's cheeks. A regular Satchmo', that one!

I'd like to chat with you via e-mail. Please contact me at kylegeissler at gmail dot com.