Why do people call you at 4:50am to tell you that you can sleep in?

We had our first big snowstorm of the season today, and everything in Wisconsin was closed. Well most things, anyway. We ended up with about fourteen inches of heavy wet snow, the kind that sticks in the snowblower like bacon grease in your arteries and has much the same "seizing up and dying" effect. It took three hours to clear it all off the driveway and sidewalks - two and a half hours the first time, and then another half hour to clear off the Great Wall of Wisconsin that the snowplow deposited at the end of our driveway, just in case we were thinking of leaving the house. Really, sirs, we were not.

Nevertheless, it was pretty, especially when viewed from indoors.

The girls were of course quite thrilled to have the day off, and they spent most of the day rampaging around in the snow, building forts and throwing snowballs, before heading over to their friends' house for more of same in a new environment. 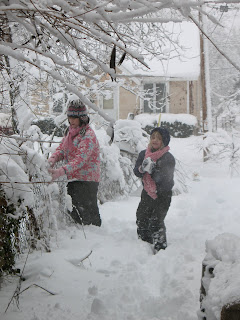 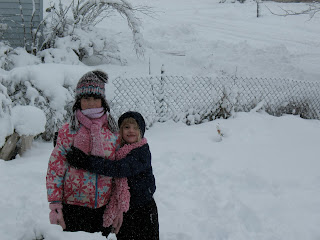 The governor even closed Home Campus for us, which meant that my students will not get to hear about the Cluster-Fornication that was Reconstruction, though I will at least get them through the Civil War.

Everything closed meant that everyone was home, so Kim made us waffles for lunch. Mmmm. Waffles.

We sort of figured that we'd be staying home today when we went to bed last night, what with the Blizzard Warning and all. At one point you really couldn't see across the street for the snow. So we settled in for a long, pleasant sleep. 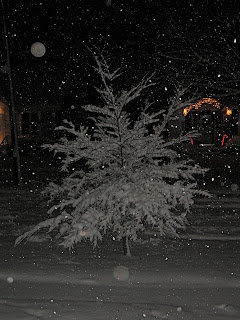 We didn't count on two things.

The fact that Kim is now serving a term as Associate Dean of Home Campus means that she is part of the Phone Tree that gets lit up every time something like this happens. So promptly at 4:50 this morning we received a phone call from the Business Manager, who told us in what I recall as an obscenely cheerful voice (though honestly anything short of a werewolf's growl probably would have struck me that way at that hour) that Home Campus was closed and we could go back to sleep.

But I was asleep before you called, I thought.

Oh well. Not his fault. Job to do, and all that. And I suppose it did mean that I could relax now and get some real shuteye.

At least until 5:30, when we got a robocall from the public school district telling us that Not Bad President Elementary would also be closed.

Now, I had sort of figured that when I heard that Home Campus was closed, since anything bad enough to close Home Campus will automatically close NBPE, though the reverse is not true. Plus, usually you have to go seek that kind of information about NBPE. They don't call you. Or at least they didn't.

But now they do.

You know, when the phone rings at 4 or 5am, good news is not what you expect to hear. Good news sleeps 'til noon.

It's been a fun day, though. Tomorrow will be a shock.
Posted by David at 8:35 PM

Your girls have no luck. With that kind of snow in Paris, they'd have three weeks off.