One of my many projects in life is to make sure that my children are current with the major cultural forces that have defined our country. This is why I went out and bought a DVD set of all the Charlie Brown holiday specials a couple of years back.

It was something of a shock to me when I discovered that neither Tabitha nor Lauren knew who Snoopy was, although really it should not have been. Charles Schulz died before either of them were born. He drew his first Peanuts strip (a name he hated - he wanted L'il Folks, and thank God for editors, I say) in 1950, five years after the end of World War II and fifteen years before I was born. Harry Truman was in the White House and my parents were in grade school. It was a long time ago.

Peanuts was such a defining piece of American literature in the second half of the twentieth century - and yes, comic strips can be literature. It had a melancholy sensibility that you rarely find in that medium, and a sublime sense of the ridiculous to go with it. When I was growing up I took these for granted. That's just how Charlie Brown and Snoopy, respectively, were. But when you try to explain to your children the whole "kicking the football" routine, or the endless futility of Charlie Brown's baseball team, or the idea of a beagle as a World War I flying ace (who remembers WWI these days?), it sort of jumps out at you.

Over Thanksgiving, we had the Charlie Brown Thanksgiving special running in the DVD player. It doesn't have much of a plot, you realize after watching it for the fortieth time, but you have to love the epic battle between Snoopy and the Chaise-Lounge. I've often felt that way myself, dealing with lawn furniture.

At one point, Charlie Brown was explaining to his sister Sally how hard it was to argue with Peppermint Patty, noting that you never really got a chance to get a word in edgewise. Kim looked over at Tabitha and said, "I'll bet you have friends like Peppermint Patty, huh?" 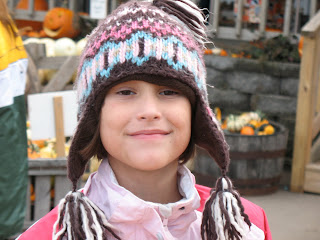 That's the best comeback I've heard in ages! Good grief (as Charlie would say) but that girl is quick. I haven't had that good a laugh in a long time.
Mom/Grammy