The Battle of Gettysburg lasted for three days in the summer of 1863.

Confederate forces hoping for a military victory to convince European nations to intervene on the side of their slave-based usurper state collided with American forces in south-central Pennsylvania while looking for shoes, oddly enough. There were about 50,000 casualties in those three days – more than the combined British and colonial casualties for the entire American Revolution. Over seven thousand of those casualties were deaths.

On the one hand, the crushing defeat at Gettysburg shattered Confederate forces and turned the tide of the war definitively in favor of the United States. Never again would the armies of the treasonous South threaten to invade the North, and less than two years later the Civil War would be over.

On the other hand, when it was done there were over seven thousand bodies lying on the ground in the hot July sun, and in an age that did not have refrigerated rail cars they would have to be buried there rather than returned to their home towns and families. This was a task.

The military cemetery at Gettysburg was officially dedicated on November 19, 1863 – four months after the battle, and 159 years ago yesterday. Over twenty thousand people turned out to hear the main speaker: Harvard College President Edward Everett, the most renowned public speaker of his day.

Everett did not disappoint.

He spoke for over two hours, giving a blow-by-blow account of the Battle of Gettysburg, complete with classical allusions, florid condemnation of the treasonous South, and artfully phrased praise of the Northerners who had died on that field to preserve the United States for future generations. The crowd loved it.

When Everett sat down the next speaker – Abraham Lincoln – rose to address the crowd.

Lincoln had been invited almost as an afterthought (“He’s the president, guys, we gotta invite him…”) and appropriately he kept his remarks brief. The Gettysburg Address, as it came to be known, clocks in at a bit over two minutes if you read it slowly. It’s probably the only major presidential speech in American history that can be legibly inscribed on one side of a 3”-wide coin. The official photographer was so taken by surprise by the brevity of the speech that the only photograph we have of Lincoln giving the Gettysburg Address is him in the process of sitting down after he finished. 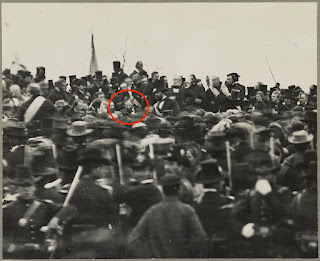 The Gettysburg Address was not well received. The Chicago Times, for example, called it “slipshod” and “puerile.” But Edward Everett knew better.

“I wish I had come as close to the heart of the matter in two hours as you did in two minutes,” he told Lincoln that day.

Because in those two minutes, Abraham Lincoln redefined what it meant to be an American.

“Four score and seven years ago,” he began, “our fathers brought forth upon this continent a new nation, conceived in Liberty, and dedicated to the proposition that all men are created equal.”

Four score and seven – 87 if you’re not familiar with “scores” – subtracted from 1863 does not get you to 1787 when the Constitution was written. It gets you to 1776, when the Declaration of Independence was written.

There is a glaring contradiction between the Constitution – which at the time it was written and ratified recognized and protected slavery and left women largely outside of political society – and the Declaration of Independence, with its ringing statement that “all men are created equal.”

But in the early American republic this would not have been seen as a problem. The Declaration, after all, is not a legal document. It has no force of law. It cannot be introduced as evidence into a court of law. It was seen, by both the Founders who wrote and approved it and by most Americans well into the 19th century, simply as the way that the colonies had announced to the world that they had begun their Revolution against British rule and their reasons for doing so.

We are a nation defined by laws. Not by individual persons. By laws. Nobody is above the law, not even presidents, and we as a nation would do well to remember that in these parlous times in which we live.

Certainly this is the answer the Founders had intended.

But there are laws and there are laws, and in the 19th century you see the expansion and growth of the idea of Higher Law – the notion that there exists a set of ideals applicable to a nation, to a country and its government, that exists above mere regular law. And whether those ideals, those principles, come from God in the form of Divine Law, from Nature in the form of Natural Law, from humanity in the form of Ethics or Morality, or from some strange bastard combination of all of them, one thing was clear: those principles and ideals superseded mere regular law, even a law as important as the Constitution. All mere laws were just imperfect reflections of this Higher Law, as close as the people at the time could get to it.

And when you put it this way, you realize that the answer to the question of what the Union was – what it meant to be an American – was not to be found in mere law, not even a law as fundamental as the Constitution itself, but instead was to be found in the principles upon which this nation was founded, ideals which were only imperfectly reflected in the Constitution, which would need to be changed now and then to bring it more into line with those founding ideals.

The Founders put an Amendment process into the Constitution for a reason, after all. They understood that the interpretations and even the very text of the Constitution would need to change as Americans moved slowly forward in shaping their nation toward those Higher Law ideals.

Those ideals could be found in the Declaration of Independence.

This is something that the Moral Reform Movements of the 1820s, 30s, and 40s had been arguing for decades prior to the Civil War, but which Lincoln brings to the mainstream of American thought and makes central to American identity at Gettysburg. It is here, with Lincoln’s Gettysburg Address, that the Declaration of Independence becomes a secular American catechism describing the principles that define Americans as a people.

What Lincoln is saying here is that if you really want to know what it means to be an American, don’t look to the Constitution. The Constitution, important as it is, is mere law, law that among other things recognized and protected slavery, and the meaning of the Union is not legal. Instead, look to the Declaration of Independence, at the higher principles and ideals upon which the United States was founded.

That’s what it means to be an American.

The Union is not a legal entity. It is a proposition, an ideal – the proposition that all men are created equal, that they are endowed by their Creator with certain inalienable rights, and that among these are life, liberty, and the pursuit of happiness. These ideals are not based in blood or heritage, but instead are principles that anyone can take up and embody. Anyone can be an American, after all.

In 1787 the Revolutionary Generation could only get so close to those ideals. They had to worry about the practical realities of setting up a new nation and a new government, and the closest they could get to those ideals was the Constitution.

Now, Lincoln is saying, now in 1863, in the middle of the Civil War, now is the time to take that Constitution one step closer to the ideal of the Declaration of Independence, to extend the definition of “all men” to include black people as well as white people and ban slavery to create a new birth of freedom, making Americans equal in the eyes of the law by granting to those held in bondage the life and liberty that was their inalienable right according to the founding ideals of this nation.

THAT, said Lincoln, that is a nation worth fighting for. That’s what a nation conceived in liberty should be.

This is the unfinished business of American history.  "It is," Lincoln noted, "for us the living, rather, to be dedicated here to the unfinished work which they who fought here have thus far so nobly advanced."  This is the goal we as a nation must strive toward.

We as a nation have, over the last two and a half centuries, greatly widened the definition of “all men” – we have extended the recognition of the inalienable rights of life, liberty, and the pursuit of happiness to women, to the poor, to those who are not straight or white or some very specific definition of Christian – but we have a long way to go before the ideals of the Declaration of Independence can be seen as being fulfilled. There are people in this country who would limit those ideals only to very specific groups – usually groups exactly like themselves, since a failure of empathy is the defining feature of so much of the politics of the 21st century – and who are actively working to strip rights away from anyone who is not a straight, white man who worships in a very specific way. We have seen such efforts succeed even in this late year. This cannot stand if we as a nation wish to become Americans.

The ideals of a nation are by definition aspirational, things the nation should strive to live up to. We have come a long way. We have a long way to go.

But if we wish to live in a nation worth preserving, it is the only route we can take.
Posted by David at 3:24 PM

Well said, and thank you.

Thanks! I'm glad you liked it.

This why I came. This is why I have remained.

Eloquent. And a host of similar adjectives.

Thanks! I appreciate it!