Happy Anniversary to Us!

Kim and I got married on a day very much like this one – sunny, fairly warm for late November in Wisconsin, and generally pleasant. Two days later we got sixteen inches of blowing snow that stranded much of my side of the family in the Milwaukee airport for 24 hours, but the day itself was nice and we got a pile of good stories (and one priceless video) out of the airport fiasco.

27 years is a long time – almost as long after the wedding as before it, actually. That milestone happens soon. We’ve raised two kids to adulthood. We’ve gone through any number of cats, rabbits, chickens, turkeys, and hamsters. Despite working objectively for the same place over this period, we’ve managed to switch employers several times in all the reorganizations. We bought a house and paid it off right before the pandemic hit, which was pretty good timing. We’ve traveled. We’ve sat at home and hung out together. It’s been a time.

I have led a pretty good life so far. It was good before Kim came into it. And it has been better ever since.

I’m not sure why she puts up with me but I’m happy she does.

This was last night at Kim's brother's house, where we had Thanksgiving. I'm missing my glasses and she has been decorated by our niece, but it's a nice picture and a memory of a good time. We've had a lot of those, and I'm glad. 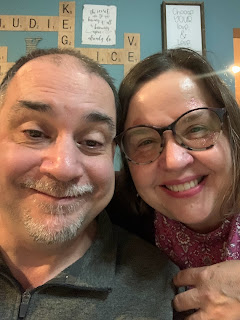 Here's to another year, and to many more to come.
Posted by David at 1:10 PM

Congratulations - and many joyous returns!

We'll try to find a time to celebrate this week, after the Thanksgiving rush ends. But it's all good.