1. Christmas has now been mostly put away. The tree is taken down, the ornaments boxed up, and the stockings folded and put in their bin. I never did get outside lights up this year so those were easy. There is a rocking chair and a small table where the tree stood and the living room looks cozy if not quite as festive. But it’s a good place to hang out nonetheless.

2. We did squeeze in one other Christmas event before we put the holiday to bed, though. Lauren’s Squad (all but the one in isolation with covid, anyway) came over on Friday night for Friendsmas, which was celebrated with Mexican takeout and good conversation. They’re all in college now and they had stories to tell, and I miss having them about the place to be honest. I’m glad they came by. 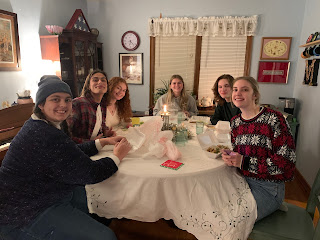 3. Eventually we will get the Christmas card out. Really.

4. The NFL season has now ended and if I read the reports correctly the Eagles made the playoffs. I’m not sure how I feel about this. On the one hand it’s always good when my team has good things happen to them. On the other hand, it does feel sort of out of kilter. But there they are, and for as long as they’re in I suppose I should pay attention to the playoffs. Fly, Eagles, fly.

5. Oliver is back at Small Liberal Arts College now for his last semester – he’ll be a college graduate in May. How on earth did this happen? Wasn’t he going through New Student Orientation last month? Someone really needs to check on the timelines as there seems to be a lot missing in there. Or maybe I’m just getting old and things are speeding up inside my own head. Nah. Couldn’t be. Must be the universe.

6. I may never get a dental appointment at this rate. Last May it occurred to me that I was about due for my checkup so I called over to my local dentist and discovered that this same idea had occurred to pretty much everyone in a five county radius. “How about December 16?” they said. “December? Like … as in Christmas? That December?” “Yes, sir, that’s the one.” Sigh. “Okay.” And then Lauren came home with covid on the 15th and I called them back to see if they still wanted me to come by and breathe on them for 45 minutes. Surprisingly the answer was no, so we rescheduled for sometime in March. By then the meteor may have hit and I won’t need to worry about it.

7. We’ve been bringing the rabbits up out of the basement and letting them hop around the living room now and then, since it seems harsh just to keep them down there. Yes, it’s warmer there than outside (it's currently +1F outside, which translates to about -17C) but it’s not that interesting down there. They seem to enjoy it upstairs even if we can only bring up one at a time since they are a) male and female and b) brother and sister, and that’s just too much of a redneck stereotype for us to deal with at this point in our lives. Mostly the rabbits stay on the big area rug since they can’t really get traction on the hardwood floor. It’s a kind of passive fence that way, though Miley has discovered how to make the long jump over to the runner. We let them bounce around for a while and then we take them back downstairs. They have, however, discovered that our cats are wussim who no longer possess whatever predator instincts they might have once had, and the rabbits enjoy bouncing up to them and harassing them until they leave. “What are you doing?” we ask the bunnies. “You are designed by Nature as a snack! Leave the predators alone!” But apparently our cats are no longer the top of the food chain around here. 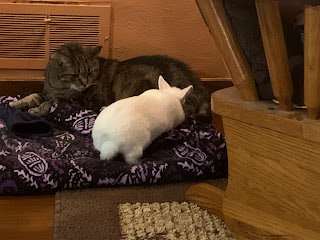 8. Thanks to the miracle of technology I can now advise students on multiple continents over what should be semester break! This is most likely a good thing, though at times you have to wonder whatever happened to the entire concept of a semester break.

9. I cannot figure out how to take decent photos with my iPhone, which is a drag since the main reason I chose to get an iPhone was because it supposedly had a good camera. I have looked things up online and done all of the things they suggest and the photos invariably come out grainy and flat. It’s hard enough to get motivated to take photos at all anymore, let alone take them when you know going in they’re not going to be any good. Of course, it’s not like I did any better with my previous Android phone. I suspect I am just not going to take good photos from now on. Sigh.

10. Today there was a Long Meeting down at Home Campus – one of those all-day events that happen at the beginnings of semesters. Mainly what I got out of it was a broken mug – one of my favorites, which tipped over on the tile floor and shattered. Fortunately it was empty at the time, but still. A sad moment. I suppose I’m not really hard up for mugs, though, since I enjoy them and find it hard to pass up a chance to acquire more of them. I now have a little display cabinet of them in my office since there were too many to put in the kitchen cupboard – this way I can see them and if needs must I can still haul them out and use them. So next mug up, I guess.
Posted by David at 10:01 PM

Thanks. :) It is a word I feel should be more widely used.