A Birthday in January

I remember this moment. 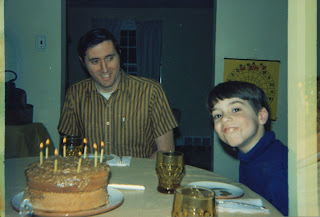 It’s probably around 1974 in this photo, give or take a year. We’re in the dining room of the house I grew up in – a concrete twin house on a one-block-long street in the suburbs of Philadelphia – and it’s my dad’s birthday, which explains both the fact that there is a cake and the fact that it has very little if any frosting on it. You’re looking toward the living room, away from the kitchen, and from there out onto the street behind the window, though it’s evening in January so it’s dark outside and you can’t really see much out there.

We got that Velcro dartboard for Christmas a few weeks earlier and it stayed up on the wall for a long time.  We got good use out of it. Whap! Whap! Whap! It kept me and my brother busy.

My plate is something out of the 1960s, with fruit of some kind painted on it in earth tones of olive greens and rusty browns. It’s only really glazed on one side. The bottom is brown. My dad’s plate is from their wedding china, with a silver rim and little daisies picked out on the edge. The amber glassware tells you it’s the early 1970s. The table eventually came with us to the new house when we moved five years later. My mom left it there for the new people when she moved out nearly four decades after that. As far as I know it’s still there. The plates and the glasses are long gone, though the china we still have.

I never liked having my picture taken, but I always understood that as soon as the camera was pointed at me I had lost that particular battle so I might as well be gracious and try to smile. Sometimes I succeeded. And sometimes it came out like this picture, which was good enough. Thanks for trying, kid. Nice work.

I remember how my dad looked at me like that. And I hope that my own children will remember me looking at them like that.

He would have been 83 today.

I’m two decades older now than he was in this photo, but there are some things that never change. You’re always your parents’ child, no matter how old you get or how time has moved on.

I love how you described the rest of the picture instead of just having us look at the people in it. I’m going to try to be more aware of the backgrounds that were such a part of our lives from now on. Thanks!

I've always loved backgrounds - as a historian, I find them fascinating, exactly because they are (as you said) the settings for our lives and too often overlooked. They say a lot about us. Plus that's often where the comedy gold is happening in movies, shows, or plays. ;) Thanks!