It’s that time of year where these lists are the best I can do.

1. When I am Grand Vizier of Creation, things will be different. Not necessarily better. But certainly different. And one of the decrees I will put forth early in my tenure is that no bread manufacturer will be allowed to print anything on their clear plastic bags in green ink, particularly not any abstract blobby shape.

2. Every so often my employer convinces me to sell them my health information, which they already have since they are the ones who insure me in the first place so I am not sure what they get out of that. I get enough money to buy some books, which keep me sedentary and provide me with opportunities for tea and snacks which cannot be good for my health that they are so desperate to monitor, so the question of who’s gaining from this remains unanswered.

3. Part of that process was that I had to go in for some blood work as part of my annual checkup. I don’t complain about such things on the whole, even if I hate needles with a wholly irrational passion, since access to health care is a privilege in this country rather than a basic human expectation and I’m glad to have it even if I think that system is desperately cruel and stupid and needs to change. I was supposed to get that work done a while ago but Events intervened and part of my reaction to those Events was to declare a Diet Holiday wherein I would eat whatever I damn well pleased because that’s just what you do to get you through Events, and it took a while for my system to return to close enough to whatever passes for normal for me to try to get tested that way. But now they have my blood and I have a large black bruise on the inside of my elbow and some numbers that look about what I expected them to look like and everyone’s happy except for me and my bruise.

4. It’s been, as noted, a busy and stressful month, and today was the first time since Lauren and Oliver left for college that it occurred to me that I was an empty nester again. This morning I was sitting at my desk getting my class prepped for tomorrow and I idly wondered when they would come down for food and it hit me that they were both elsewhere and that was a rather odd realization.

5. On the plus side, I really like being in a classroom again and seeing my advisees in my office. My students have been good about wearing their masks and it’s been nice getting to know them. Although I am now convinced that one of them is a member of the Russian mafia, though this may just be me.

6. Kim and I hit the Giant Asian Market for some retail therapy yesterday and spent a happy hour or so just wandering up and down the aisles looking for inexpensive treats. I love the compressed sweet sesame seed things, for example, though for some reason the Market was out of the cans of Black Tea that I discovered last time. The salty snack aisle remains an Empire of Weird, which is a lot of why we go after all. I couldn’t resist these: 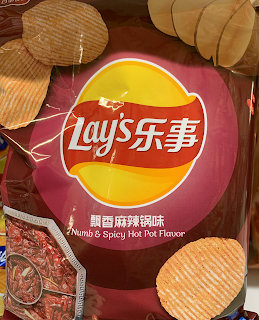 They were spicy, though I’m not sure where the “numb” part is supposed to come in. I did once make a (thoroughly inedible) chicken dish with far too many sancho peppers that had that effect (and also made ordinary water feel carbonated when you drank it). Perhaps I can suggest an addition to their recipe.

7. There have been actual days over the last week where I didn’t have any book in progress, and I think the last time that happened was the early 1980s. It’s been a time.

Yes, it’s a CD. I’m old school. Also, old. But you can’t autograph a downloaded mp3 now, can you? It has been in heavy rotation here at the homestead.

9. Also in heavy rotation have been The Mountain Goats, whom I discovered last year when one of my students recommended them to me, and it turns out that Oliver is a big fan as well and we spent some time driving together this month and he put them on the playlist. If you haven’t listened to “This Year” or “The Best Ever Death Metal Band Out of Denton” you’re missing out. “This Year” has become my theme song.

10. Although last month a friend of mine asked me what my walk-up song would be if I were a baseball player waiting for my turn at bat, and really the only possible answer to that would be “Lawyers, Guns & Money” by Warren Zevon.
Posted by David at 6:36 PM

Before I trot off to bed:

1. I’m certain that you have a reason for such a decree that makes sense to [someone]?

3. I’m actually okay with needles, as long as the phlebotomist knows how to wield them. My big thing is with masks - a very difficult item for me to wear for any significant length of time. Like, say, ohhhh, 7 - 9 seconds. This past year has been … an exercise … in … self … control …

They just locked down our regional hospital - services are now focused on whoever they think has the best chance to survive. Or the best insurance. Not sure precisely how that works yet.

6. Asian Markets are fun. Especially the ones where no one speaks a word of English.

8. Cool. [Wonders somewhat aloud while looking at his turntable: “CDs are old school? Since when???”]

10. An, ahh, interesting choice for your walk-up song. I think my first choice would be:

Because it always falls apart …

1. Oh yes. We got a loaf of sourdough bread this weekend that has a clear plastic bag with green blobby things printed on it and every time I walk past it I think, "Well, that went moldy fast."

3. Isn't it amazing how Republicans - who are by far the leading anti-maskers and anti-vaxxers in the current plague - have managed to create the very Death Panels they warned us about when the Democrats tried to enact national health care back in the 90s? My general rule of thumb is that if I want to know what the GOP is doing all I need to do is find out what they accuse others of doing. Never fails.

I wish you well in your newly rationed health care. Be sure to thank an anti-vaxxer and tell them to fuck themselves.

6. Those are fun. The last time I was in San Francisco we went into a couple of stores in Chinatown where nothing - not even the prices - was in English. It was an adventure.

8. As the parent of two college students and a teacher of many others, I can tell you that nobody under 30 uses CDs. Nobody under 20 knows how to burn them or why. Most people under 15 don't even know what they are. I remember when they first appeared!

I had a long drive this month, and I had each of my kids accompany me on one leg of them - Lauren on the way out, Oliver on the way back. I put them in charge of the music. It was all mp3s.

9. They're fun. Start with those two songs. I will say that the main guy (Jeff Darnielle) never sleeps. He's got 49 albums on Spotify as of last night. The band is only 30 years old.

10. That would work too. But really, you can't top "Send lawyers, guns and money - the shit has hit the fan."