A Spring Day in a Different World

Today is my parents’ 58th anniversary.

My dad passed away a few years back and my brother and I are scattered about the country, and to be honest other than the big round numbers it wasn’t something we paid a whole lot of attention to when we were all living together – it falls right around Mother’s Day and the end of the semester, after all. But as time and tide have marched on it has become more of something to note and remember.

My parents were married on a spring day in 1963, in a different world from the one we have now.

On a larger scale, Kennedy was president. The Baby Boom was slowly winding down. WWII was still fresh in people’s minds, as was Korea, but Vietnam hadn’t really happened yet, at least for most Americans. It was, in many ways, still the 1950s, though that would change soon enough.

On a more personal level, there were entire generations of family and friends who were still around, still in their prime. My grandparents. Their various aunts and uncles and cousins all throughout South and West Philadelphia.  Both of my grandmothers' mothers were alive then too. All of them wells of memory extending back to the beginning of the twentieth century or earlier.

And while the larger world spun on in its grand and imperturbable way, the personal one changed that day. There was a new beginning.

There were children and pets, jobs and houses, schools and vacations, and people who entered and left, and through it all there were my parents, who loved each other and us and created a home where we could grow and thrive.

They were and remain my role models in this world.

It’s a new world these days, with new historical events and new generations whose memories will extend ever further into the 21st century. But in the end, as ever, it comes down to two people who created a life and a home on a spring day in 1963. 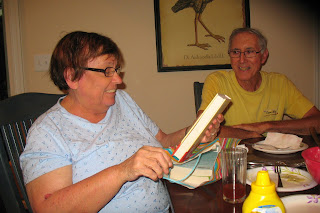 Seems you can never repay the parental units. You try, but ultimately, it is simply not within the realm of possibility.

Happy Anniversary to Mom & Dad from my Viking and me.

I worry less about repaying my parents now that I have kids of my own and don't really expect them to repay me. They need to pay it forward to their own families, that's all.