Food of the Gods

We went up to Madison yesterday for some retail therapy.

I haven’t been in Madison since before the pandemic, which is pretty impressive when you think about it. You can’t really live in in southern Wisconsin without heading into Madison at least every now and then – that’s where all the funky stuff is, and the campus is pretty.

But plagues will, and so we didn’t.

Kim had to go there to run some errands. Lauren just likes to get out and about. I’m completely swamped with grading and had no business going anywhere other than my desk, but you can only do that for so long and to be honest Lauren is going to be away at college next year and the number of these opportunities is only going to dwindle as that gets closer, so to my students, there you go. I’ll get you your exams soon, I promise.

Sleep is for people who don’t have anything to grade.

Our first stop was lunch. Lauren found a likely looking sandwich shop and directions thereto, so we drove over and ordered from the little window that they’ve jury rigged because nobody in their right mind actually sits in a restaurant these days.

Yes, I know that lots of people are sitting in restaurants these days. The qualifier is important. Pay attention.

It is no longer Hard Winter in Wisconsin – the temperature has been a few degrees above freezing for, what, DAYS now and the snow is beginning to melt – but it was still a bit chilly to eat outside, so we sat in the minivan and enjoyed the sandwiches. They were good sandwiches. Life is infinitely happier for people with good sandwiches, and for a pleasant period yesterday that was us.

After stopping at a chocolate factory to pick up some donations that they were gracious enough to make to one of Kim’s many projects, we headed over to the nearby Giant Asian Market.

I love grocery stores. I love the one I go to here in Our Little Town, with its vast assortment of minute variations on every conceivable product. I love the little ethnic ones we have here – Lauren and I just visited the new Mexican grocery in town last week, in fact, and we spent a happy half hour afterward snacking on various treasures and making those wheat-based things that you fry in hot oil and they puff up to forty times their volume that seem to be so popular in Mexican groceries. When we go abroad I always make a point of stopping in the grocery stores wherever we go, because it’s fascinating to see what people eat. My grocery buddy Sara and I can ransack a Swedish grocery store in fifteen minutes flat.

So the Giant Asian Market was just the place for me.

It’s the kind of place that has aisle after aisle of things that may or may not be translated into English on the package, so you have to either read the little tags on the shelves or trust that the photos on the products are more or less accurate. We spent a happy hour or so just idly walking up and down the aisles deciding that this or that looked like it was worth trying. I’m happy to check out the snacks and the spices. Lauren enjoys those plus the healthier things. Kim was looking for a couple of specific things for a recipe.

So there I am, happily sorting through the various flavors of potato chips that you know would probably not be hot sellers at the regular grocery store here in Our Little Town, when I came across this: 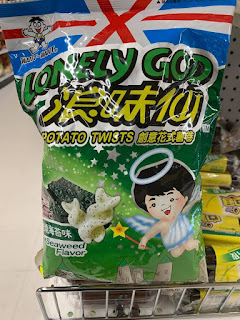 Let us overlook, for the moment, that this is Seaweed Flavor. I’m sure there are people out there who like Seaweed Flavor, and good for them. They can have my share. I am hardly in a position to criticize other people’s tastes in Potato Twists.

But I will admit that the “Lonely God” part of it gave me a bit of pause.

For one thing, there is a certain ominous quality to that description that one does not usually associate with snack food. “Gods are solitary beings, like most predators,” as Sean Williams, an Australian SF/F author whose work I greatly enjoy, once observed. “Only prey socializes.” This does not strike me as a particularly cheerful thought to be putting in front of people who just want a tasty bag of seaweed treats to accompany their latest digitally streaming movie. I suppose it depends on the movie, but still.

For another, you would think that a god could conjure up company anytime they wanted. That’s one of the perqs of being a god, isn’t it? Conjuring things?

I have never been a god, though, so I could be wrong about that.

I did not buy the Lonely God Seaweed Flavor Potato Crisps, in the end. Someone else will have to do that. But we came away with a large pile of fascinating foods to try, and we are already working our way through them. The Sesame Slices were quite tasty, in fact.

Then we went to Costco and pillaged the place.