I’ve been putting together PowerPoint slides for my classes this year, because it’s fun to see what these people all looked like. Samuel Gompers, who founded the American Federation of Labor in the 1880s, looks like he’d be just as happy to eat you alive as talk to you, for example, while John Scopes (of the 1925 Monkey Trial in Dayton TN) was clearly chosen last for team sports in grade school.

It’s nice to be reminded that these people were human beings just like the rest of us.

As my US2 class gets closer to the present, though, I find that I can start slipping in pictures from my own family – a fact that tickles me no end. Sometimes I let my students know, and sometimes I just enjoy my own private knowledge.

I spent several summers scanning in all of the family photos a while back. For some reason both sides of my family were remarkably good about taking pictures – not a common activity in the early 20th century, let alone the 19th century that some of my dad’s family photos go back to. We have literally thousands of photos, and some of them turn out to be pretty well suited for class themes.

When we got to the 1920s, for example, my dad’s mother appeared.

You can’t discuss the 1920s without talking about the emergence of the automobile as a cultural and economic force in the US. That’s the decade when Americans truly discovered their obsession with cars, and the federal government spent millions building highways to encourage it. Public money is always the foundation of private wealth in this country, no matter what people would have you believe otherwise. If you want to know whether an industry was thriving in the 1920s you simply have to ask if it had any real connection to the automobile. Steel, rubber, gasoline, glass, concrete (for highways), construction (motels, restaurants) – all of them did well. Coal and textiles did not. Plus for many Americans a car meant a freedom from restraints that they’d never know before – from rural isolation, from parental oversight, from all kinds of limits. 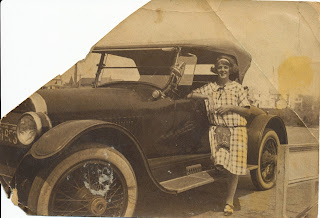 That’s my grandmother there, sometime around 1922. She’s about 17 in that photo. She was never one to tolerate having limits placed on her, and you can tell that this habit started early.

Last week we covered the home front of World War II – a very good time for most Americans, unlike pretty much every other major belligerent during the war. Nobody was bombing the US. We were an ocean away from the fighting on either side of the country. The war ended the Depression and brought full employment and high-paying jobs to a nation that had known nothing but hard times for over a decade. The middle class stopped shrinking and began to grow, and for one of the few times in American history economic inequality actually declined. 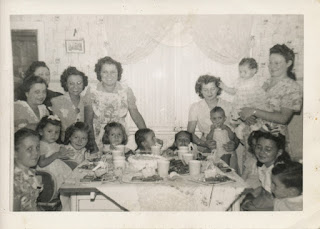 This is my mother’s second birthday party, which happened early on in the war. I’m pretty sure she’s the one with the bow in her hair on the left. My grandmother is standing at the left center, with the floral apron and checked dress. My great-aunt Josephine is standing just left of her sister, my grandmother. The baby boy on someone’s lap (I believe her name was Annie) on the right side of the photo is probably my uncle. I don’t know who the other people are in the picture – some of them were probably relatives, and some of them were probably neighborhood people. It’s entirely possible that many were both.

This is clearly a celebration, and the table is piled high with food. WWII was, as noted, a good time for most Americans. Not the people actually on the front lines, of course, or those who lost loved ones. But for the rest, it was the time when the hard times ended, when people had jobs again, when there was enough to eat again.

It’s easy to forget that your own life, and the lives of your family, is part of history. That someday people will study you. That the stories you tell will become history.

But it happens to all of us, someday.

My mother diligently took hundreds of photographs nearly every year of her life. What she didn't do was to write notes on the back about the subject of the photo. I have thousands of photos dating from the late 1930s through the mid-1990s. At some point a few years ago, I started scanning those photos to preserve them. Filled up an indeterminate number of thumb drives with them. Still pop 'em up and look at them from time to time - However ...

The really sad part is that there's no way that I'm aware of to tie any of those photos to any meaningful data. I've shown dozens of them to members of the family but no one can advance the meaning. So much is lost to time ...

Don't know what, if anything, will ever become of all of those little windows into my mother's life once I'm gone - and that's kinda sad, too.

That's a real problem and a sad one. I ran a historical society for a while and I cannot tell you how many unidentified photos we had in our archives. Great Grandma dies and the kids have no idea who those people are and no stories attached to them, so it's either donate them to us or pitch them into the landfill. It drove me nuts, though I was glad we ended up with the ones we did.

My dad told me in grade school to write the names of the people in my photos on the back of them. "You don't think you'll forget them, but you will," he said, and he was right. I'm glad I took his advice. My own photos are labeled up through about the time Lauren was born, and at some point I will continue that project.

That was one of the main reasons I decided to do all that scanning, so I could distribute it around to all of my family and ask them to tell me stories. Only my mother ever did, but she gave me a lot of stories. And I can extrapolate from there for a lot of the photos ("Oh, that story is about This Guy, and he's the same guy as the one in That Photo Over There"). There are probably still a lot of people I'll never identify, but at least it was a start.

Having done some actual genealogy since then has been helpful too. If I can pick out one person, I can make some good guesses at others with them.

But as you say, so much is just lost to time.

All this brings home the point: Historical data must be recorded contemporaneously by those who are living it. Historians such as yourself are powerless to analyze history in any meaningful way without that data.

Mayhap that is why yours is such a misunderstood, and, at times, defamed profession. I hope that you know that you have earned my complete adulation with your ability to bring clarity and understanding to historical subjects that you've tackled here.

Well, thank you! And to you as well - your comments and critiques have added a lot to this blog.

There are such broad blank spaces in the past. That came as a real surprise to me as a young'n - the idea that it wasn't all laid out there for you to find. I always tell my students to write things down, because otherwise it will all be lost. I read a fascinating story online once to the effect that one of Egypt's main trading partners was an empire called Punt and today nobody knows where it was located because that was so obvious to the ancient Egyptians that nobody ever wrote it down.

That's why I started this blog, to be honest. To write down the stories as they happened, or as they occurred to me to write them, so they wouldn't get lost. We'll see how well that works, I guess. :)

Well, at least so far, it would appear to be working exactly as intended ...

You may take a gold star and place it upon your brow so everyone can see what a good boy you are.