Spring Has Been Declared

It is springtime in Wisconsin.

Oh, the calendar still says February and the snow on my lawn is up to my knees – higher in the mounds that surround the driveway apron and make backing into the street such an exciting experience – which means I have not yet bothered to turn off, let alone take down, my Christmas lights since the controller for those is buried in a pile of snow somewhere near the corner of the house and I do not particularly care to go slogging through knee-deep snow to take care of a problem that is troubling me not at all, and yes indeed it is entirely likely that this will end with a blizzard and subzero-Fahrenheit temperatures at some point in the next couple of weeks, but for the moment I have declared it to be spring.

For one thing, we have been above freezing for days now, and the snow that is up to my knees was once up to the bottom of my pants pockets, so the idea that at some point there will just be lawn on my lawn is now conceivable.

For another we are in the depths of the semester and I am completely swamped and overwhelmed and trying to figure out how I am going to survive until the middle of May and that’s just how semesters go, I find, especially in the middle of a pandemic where suddenly everything has to be redesigned on the fly to fit different course delivery methods – a process that once upon a time would have involved some release time during the semester or summer and perhaps even a small stipend but which now comes standard at your normal salary if you are lucky enough to have a salary at all in this economy.

Also, we now have chickens. I wasn’t sure if Lauren was going to want to do that again, since this is her last year in 4H and nobody is sure if we will even have a Fair this summer. We didn’t have one last year, after all. But this morning she and Kim headed out to the Great Poultry Swap Meet a few towns north of us and wove their way around the halfwits wearing their masks as chinstraps in order to make purchases from the people who were smart enough to figure out how to wear a mask and thus can probably be trusted to be smart enough to raise quality poultry for us to purchase and came home with ten new chickens of varying sizes and colors. After some frenzied rearranging of stuff they are now comfortably ensconced in the basement in two Rubbermaid bins just across from the rabbits’ winter quarters, where they will stay until it is Actually Spring or the roosters start crowing, whichever comes first, after which they will be taken to our friend’s barn to begin the long, slow process of acclimating them to the chickens that are already there. Eventually they will form one giant Superchicken and will drink Super Sauce with Fred the Lion. 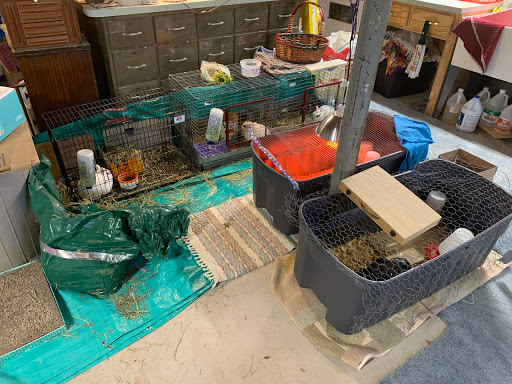 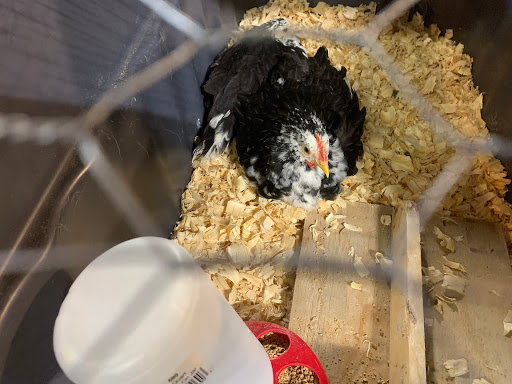 You knew the job was dangerous when you took it.

Plus the usual aches and pains that occur when one is no longer young and the weather starts to turn are coming back. A few years ago I bent the last joint of one of my fingers sideways by catching it between a trashcan and a 50lb bag of chicken feed – a process I do not recommend at all – and it likes to remind me of this fact whenever the weather changes. Pretty soon I will be one of those old codgers who sits by the potbellied stove and forecasts the weather based on the status of their joints though where one finds a potbellied stove these days is a bit of a question.

What've we got in those bins?! Glad you asked! (I need a t-shirt that says "Ask me about the new baby chicks.")

The anconas are a new breed for us - a heritage Italian breed.

Issues. I find myself in the "Season Suite: Late Winter, Early Spring (When Everybody Goes to Mexico)"* part of the year.

When I became one of those old codgers who sits by the potbellied stove and forecasts the weather based on the status of their joints i found that forecasting became much more accurate by skipping the whole 'stove' bit and just going straight to pot-bellied.

I'm pretty certain that Rubermaid™ did not envision that particular use when they designed those tubs.

Hi Kim! You probably don't need me to point out the idea that that particular shirt is available on-line at any of a number of site that sell custom T-shirts, so I won't.

* Ref: Rocky Mountain High album, John Denver, 1972. If you've never heard that, you need to go listen to it. Now.

(Even if you're familiar with the song, you need to go listen to it. Now.)

@Kim - that's a lot of chickens. We'll have to look into finding that shirt. :)

@Lucy - Well, I've been working on the pot-bellied part already, especially during this lockdown year, so I'm good that way. But I think you need the stove to complete the look. And keep warm.

Rubbermaid has no idea the uses their products get up to. I figure keeping chickens is on the low end the weirdness, honestly.

My grandmother was a huge John Denver fan and had that album in vinyl - probably bought it when it came out - and I heard it a lot after she moved in with us, back in the 70s. I'd forgotten it, though - thanks for the reminder. :) Someday I will visit Mexico - a lot of my students have family there and they tell me all sorts of stories about the place.