1. This year I have been trying to put up PowerPoint slides for my classes, on the theory that they’re more interesting than staring at me on a screen for an hour or so. It seems to be popular. In the fall I mostly focused on the historical side of things, but I have to confess that as the spring wears on and the pandemic stretches out beyond all measure, I find myself inserting more and more memes, just to keep things entertaining. We just covered the Boston Tea Party, for example, and I couldn’t resist tossing this one in: 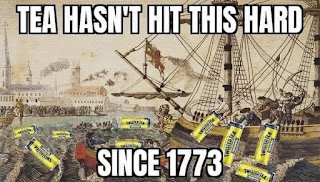 It seemed to go over well.

2. Something has gotten into Midgie and now she is convinced that Kim is some kind of cat-destroying demon and runs away every time she’s realizes that they’re in the same room together. There is no basis for this, but that does not mean much to a cat who is best described as “sweetly dim” even when compared to the average cat, which is not a high bar. Eventually it will fade. Either she’ll get over it, or she’ll decide that Kim is an entirely new person who can be approached for food. You take your wins where you can get them with cats.

4. If you were ever under the hallucinatory delusion that supporters of der Sturmtrumper are legitimate Christians, this year’s CPAC should correct that. 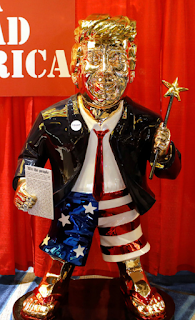 Golden calf, golden ass – it’s all the same in the end.

5. Best comment I saw on that little debacle: “Have a Baal at CPAC!”

6. I’m still not convinced that upgrading to macOS11 was a good idea. Every so often it … just … slows … to … a … halt. And then I have to restart it, which can take up to a month in subjective time, and then I have to fix all the things that didn’t quite survive the rebooting process, such as the desktop background which has to be replaced because a) my classes are all remote so every time I switch over to the PowerPoint slides they get to see my desktop and b) the default macOS11 desktop is PAINFULLY BRIGHT which is both annoying and unprofessional. This does not strike me as progress.

7. More and more people I know are getting vaccinated against the coronavirus, which is a lovely thing. So far I am not among that number since everything I do has been moved to remote this academic year and they’re prioritizing the folks on campus who need to have direct contact with students. I am looking forward to it, though. And for me to say that I am looking forward to a shot, well, that’s quite a thing.

8. Lauren and her friends have discovered bowling, which as the former captain of my high school bowling team pleases me no end. They gather at one of the local bowling alleys, rent a couple of lanes for the evening, and generally have a good time. It’s something you can do while masked, and it’s fun. They’ve decided to dress up for these occasions, too. One time it was “Businessperson Night” where they all got dressed up in officewear – jackets and ties for the men, dresses or similar for the women. The most recent occasion was “80s Action Hero Night” which made me feel very old indeed. Not because they were dressed as characters from shows that aired during my prime years, most of which I didn’t watch too often anyway, but because Lauren came down to my office a couple of days beforehand and asked me “Who is Magnum Pi?” “You mean Magnum P.I.?” “Probably.” We have reached the point where people are no longer familiar with 80s private investigator shows, and that may be for the best. But there she was, Hawaiian shirt and baseball cap and all. They had a very good time, from what she said.

9. I do still chuckle about trying to find the circumference of Tom Selleck every now and then, though.

10. I have now made it through season two of The Mandalorian. I don’t watch much television these days, so this is something of an accomplishment. It’s a pretty good show, really. I know the critter has an actual name, but I still think of it as Baby Yoda. Part of me wonders if the writers whomped up a name just to stop people from calling it that. It wouldn’t be the strangest thing that has happened on television, not by a long shot.
Posted by David at 9:04 PM

6. I have concluded that I'm satisfied to hang out with Catalina for a while. Too many issues with the new OS.

7. I have set two benchmarks that are gonna need to be achieved before our little family group is going to start relaxing:

Until then we're gonna keep maskin' up outside the house.

9. I think Tom Selleck is actually an isosceles triangle; therefore, I believe it would be inappropriate to use π to calculate his circumference.

6. Yeah, that's probably a good idea. I couldn't do get there - both 10.14 and 10.15 somehow magically disappeared from the internet, and to be honest 10.15 has the same compatibility issues with my old programs (32 bit vs 64 bit) that 11 does. So here I am. There are things it does that I just don't understand, but mostly it seems the same as what I had. Just weirder.

7. This is definitely not the time to relax. Not that there aren't a lot of people who have yet to unrelax - I went to pick up some takeout the other day and there was a restaurant full of unmasked people chatting away - I made a quick getaway once my food appeared.

9. Tom Selleck is about as square as an old dude can get, really. ;)