Today was supposed to be the first day of the County Fair.

Normally this week would be a blur of activity.  We’d have spent the weekend washing chickens and grooming rabbits, framing art projects and photographs, and setting up rabbit and poultry barns.  We’d have had the chickens in our garage overnight – you don’t return them to the barn after they’ve been washed unless you want to wash them again – and yesterday we’d have brought the animals over to the fairgrounds and installed them into their pens.

In previous years there might also have been Drama rehearsals as we tried to remember how it went back in May when the Drama Festival happened, and one year there was a pig to manage.

There would be judging of various kinds going on today and all week – they’ve been pushing that later and later into the week over the years – and we probably would not have seen Lauren for the duration.  Lauren regards Fair Week as the best week of the year, and especially since she got her license and can drive there herself she mostly spends the entire week there, returning only to sleep and shower.  Oliver aged out of 4H last year so he’d probably just be going as a visitor the way we would. 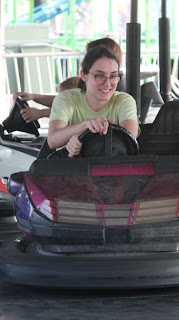 There would be musical acts, most of which I have never heard of since I am not much on country music and the rest I forgot about until recently as they were big when I was in high school.  But they’re out there putting on shows and people enjoy the music and really that’s good enough, isn’t it?

We’d have friends come to visit and walk around the place with us, and we’d run into other friends while we were there because that’s the sort of thing that happens at the Fair.  It’s a gathering place.  You don’t just pop into the Fair and pop back out.  It’s a place to spend time.

There would be moderately nonlethal food in abundance – things on sticks, things deep fried, things that in normal times you’d look at with a general sense of “it’s too unhealthy and I’m too old” but the rules don’t apply to the Fair and you eat it anyway, and besides the Greek salad place can almost be considered healthy if you squint your eyes a bit and don’t think about it too hard.  Certainly the lemonade is an annual tradition, as the growing collection of large plastic cups emblazoned with yellow fruit that we have in our kitchen can attest.

There would be chaos – it’s hard to get everything into the Fair and then out of the Fair at the same time that everyone else is trying to do so.  There would be unnecessary purchases and money that just somehow seems to vanish into thin air so you hope that at least some of the unnecessary things are going to stick around for a while and make you happy with their sheer uselessness and frivolity.

We’d be exhausted, but it would be a good kind of exhausted.

But not this year, alas.  Like so many things the County Fair has fallen victim to a plague that we as Americans have refused to do anything serious about, and so we hope for a better year next year.
Posted by David at 3:24 PM