Now that Kim is working in Madison she rubs shoulders with a different strata of Wisconsin society than we usually see here in Our Little Town.  Specifically, the strata that has Green Bay Packers season tickets, which are highly prized in Wisconsin.  If you want one you should get on the list right now and perhaps your grandchildren will get them.  The wait is several decades long.

Not every season ticket holder can make every game, of course, and sometimes they’ll sell you individual game tickets.  And if those tickets are for a game against my hometown team, the Philadelphia Eagles, well, really, how often does that kind of opportunity come up?  It was a Thursday night game, which did give me pause as it meant we’d be leaving Our Little Town sometime in mid-afternoon in order to get up to Green Bay in time and we’d likely be back home in the wee hours of the morning.  But even when I get deep into my “why am I leaving my house exactly?” mode I can still recognize that yes, indeed, I should leave my house for this, and Kim really wanted to go, so we went.

The only other time I have ever been to an NFL game in person was 1972.  Tom Dempsey was kicking for the Eagles, Richard Nixon was president, Veterans Stadium was about a year old or so, and my dad and my grandfather took me to a preseason game against what were then the St. Louis Cardinals.  I don’t remember much about the game, to be honest.  I’m sure they lost – they lost pretty much every game that year and for most of my childhood – but I remember it as a good time.

Like most older stadiums, Lambeau Field sits in the middle of a city neighborhood rather than being marooned on an island of asphalt on the outskirts of town.  It’s actually a bit surprising how quickly it comes up when you get into Green Bay – you get off the highway and head up Oneida Street and – BOOM! – there it is.  All of the businesses along that street close on game days, apparently – even the gas stations stop pumping gas, though they do stay open to sell you snacks – and they sell parking.  We found a spot without any difficulties, paid the fee, and started walking.

And here I discovered that it really was going to be a good night.

I wore my Eagles jersey and hat, of course.  As someone who has lived in Wisconsin for nearly a quarter of a century now I’ll cheer for the Packers against any team except the Eagles.  When the Eagles are involved there is only one team to cheer for.

And while I did get grief for this from Packers fans, it was a good-spirited sort of grief – the kind of grief that comes from people who understand that this is a game, that we’re all here to have fun, and everyone should just relax and enjoy it.  I saw a lot of Packers and Eagles fans hanging out together and doing each other favors (taking pictures, and such), and a lot of people in Aaron Rodgers jerseys came up to me and asked if this was my first time at Lambeau and how I was doing.  We talked as fans of our teams and as fans in general, and it was really nice.  Several people – both Eagles fans and Packers fans – noted my jersey and Kim’s Packers sweatshirt and had fun asking how we worked things out, and we had fun answering back.  The entire time I was in Green Bay – from the moment I got out of the car through the entire game and back to the car – I never had any trouble.

You have to love that.

It’s hard not to be impressed by Lambeau Field, as a sports fan.  It’s one of the iconic stadiums in this country, and those get more and more uncommon as time goes by.  We walked up and found a line. 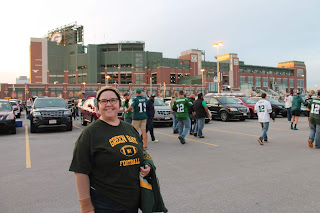 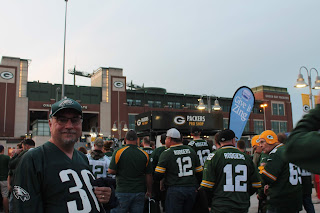 They funnel you through a long line of metal detectors and then through another chokepoint at the gate where you show them your tickets, so we had plenty of time to mingle with other fans.  There were a lot of Eagles fans – it seemed to me that maybe 20-30% of the crowd had Eagles jerseys or other gear on, while most of the rest had Packers stuff.  There was the occasional Bears fan, but nobody discussed that.  While we waited to go through the metal detectors and ticket takers there were more than a few rounds of dueling cheers (“Go Pack Go!” followed by “E-A-G-L-E-S Eagles!” in a sort of beer-fueled round – a lot of the people in line with us had been tailgating since lunchtime, after all) and then we were in.

We found our seats pretty quickly.  We were on the 15-yard line, on the visitor’s side, on the end of the stadium that has Green Bay painted in the end zone rather than Packers.  It’s all bench seating in Lambeau – aluminum benches with numbers painted on them to let you know where you’re supposed to sit.  They might as well have been made of spun glass and razor blades for all that most people actually sat down during the game.

The first thing you notice when you see the teams out there warming up is that the field is actually fairly small.  This makes sense when you think about it.  It’s 120 yards long and 53 yards wide and that’s it.  It looks much bigger on television.

The second thing you notice is that sweet dancing monkeys on a stick but those guys are huge.  Carson Wentz is nine feet tall, and the guys on the line of scrimmage each weigh half a ton.  Aaron Rodgers is only eight and a half feet tall but he has the mustache to make up for it.  The only exception is Darren Sproles, the Eagles running back, who can stand up comfortably between Wentz’ knees.

We watched them warm up for a bit, and I went out to the concessions to find dinner.  It was surprisingly tasty, all things considered – don’t ask for nutrition and try not to think about the prices, but if I wanted either of those things I’d have stayed home. 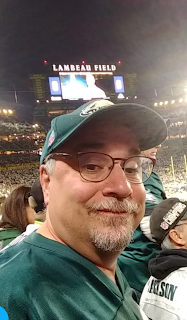 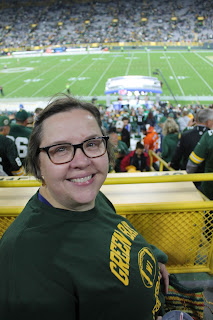 And then the game began.

We were in a section that had a lot of Eagles fans in it – in the rows surrounding us it seemed pretty even, actually – and there was a great deal of cheering to be done whenever anything happened because no matter what happened somebody thought it was worth cheering about.  Most of the action happened at the other end of the field, regardless of who was defending that end, but enough came our way to make it interesting.  It took the Eagles most of the first quarter to remember how to play the game, and then after that it got pretty evenly matched. 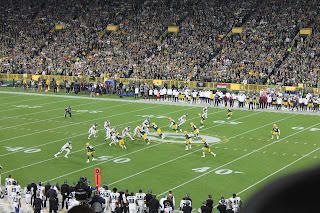 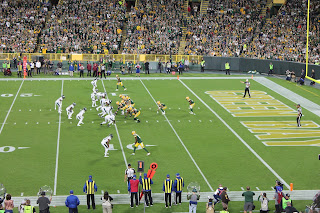 The Eagles took a one-point lead into halftime.

The second half went much like the first.  I’m not sure why the coaches made some of the decisions they made (Seriously, Pederson – a 2-point conversion in the 3rd quarter?  And LeFleur, 1st and goal from the 1-yard line and not a single running play?) but I will admit that it kept things lively.

If you’re planning to go to Lambeau for a night game, though, be warned: when the Packers score, they turn off most of the bright lights and shoot off fireworks.  There is about a 3-second gap between those two things, which means that there is a short time where you’re starting to look for the exits because what just happened?  And then the fireworks go off and you think, “Oh, okay.”

Thursday night NFL games are not always good games, but this one actually was – if you were a neutral fan just looking for an entertaining game, you’d have been happy with it.  And as an Eagles fan, I was very happy.  The Packers had the ball with less than a minute to play, about 7 yards from the Eagles’ end zone.  I asked Kim, “Are we going to stay for overtime?” and she said “Hell yes we’re staying for overtime!” and then the Eagles intercepted the ball in the end zone and the game was over. 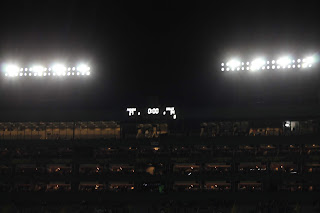 It was a long ride home and a long day the next day, but it was worth it.

(As in DUH? What, precisely, was the score?)

What? That's the last photo!

Okay, it's a blurry photo.

There wasn't much defense being played out there, but what there was was pretty enthusiastic.

Or ... did I completely miss the whole point of the snark tag AGAIN?

[irony]And Yes, you completely and totally missed the whole point of the [snark] tags. Again.[irony]

(You should note that I did not actually close either of those tags. I'm getting to know you too well.)