A Busy Day in Politics

So here we are.

A sixteen year old girl just went to both Congress and the UN and blistered their damnfool ears with righteous indignation about the future of the world.  For her trouble she has become the target of every doughy rightwing incel who can still find his keyboard amid the piles of Mountain Dew cans on his desk and was personally mocked by the most corrupt president this country has had in over a century, both of which she should wear as badges of honor.  She should win a Nobel Prize just for this week, let alone the years she has already put into this cause.  She should win it because she is right and they are wrong.  She should win it because she has the courage to say it to their faces.  She should win it because outrage at the slavering buffoons who think it’s perfectly okay to roast the planet and slaughter my children so they can buy a second yacht is the only correct response to those buffoons.

Greta Thunberg is exactly the hero the times call for now, and those who can’t see that will be forgotten on the ash heap of history if they are lucky and cursed by whatever descendants survive if they are not. 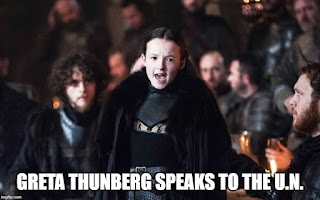 Also, old white men should not get into trolling wars with teenagers.  Der Sturmtrumper may be the most visible example of what happens when unmedicated assholery intersects modern technology on the shitter at 3am, but teenagers grew up with this technology and they will destroy you if you tangle with them.  And good for them. 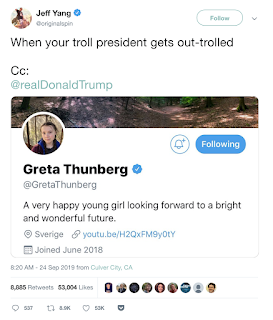 It has begun.  After nearly three years of national disgrace and international embarrassment, three years of watching the Dunning-Krueger poster child for corruption, petit-fascism, and authoritarian arrogance strut upon the American stage as if he were fit so much as to pick up the rolling turds of the Founding Fathers with his bare hands, three years of demonstrated criminal activity and immoral actions, three years of sabotaging the national security, world standing, economic future, and social fabric of the United States, three years of braying minions who see nothing wrong with this, it has begun.

A deeply flawed and bitterly incompetent president is finally, formally, going to be the subject of an impeachment inquiry, and where that goes will be anyone's guess.

He’s guilty, of course.  He’s admitted it himself, numerous times, most recently yesterday.  His only defense all along has been “so what?” and maybe, just maybe, there is enough patriotism and respect for the law and for the Constitution and for morality in this country that “so what?” isn’t going to be enough anymore.  Maybe.  I don’t doubt that the GOP will fight tooth and nail for this guy, will defend with every scrap of their power their grip on absolute authority and minority rule in this country, and let them.  They will either lose and be destroyed for a generation, or win and declare once and for all that the American experiment in freedom and self-government has come to an end.

The Founding Fathers never thought the republic would last as long as it has.  Republics require virtue - the ability of leaders and citizens to place the common good above their petty private interests and to work for justice and morality - after all. 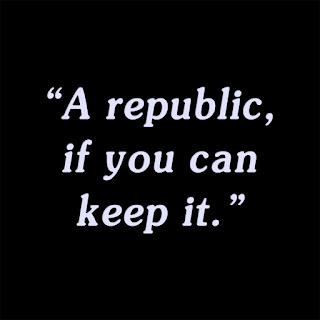 And now, we wait.

In all of British history I am not sure that there has ever been a verdict by the British supreme court that a sitting Prime Minister had so misled the Crown that the proroguing of Parliament was “unlawful, void, and of no effect.”

From a distance, the saga of Brexit has been a sad spectacle of a once proud nation destroying itself with right-wing idiocy – something that, as an American, I have no real standing to criticize another country for, given the last three years, but which I find disturbing anyway.  I have friends there.  I've been there.  It's one of the places on the planet that I enjoy and find absolutely fascinating and it's been painful watching this process unfold.

I am glad that there is some resistance to the fundamentally unsound and anti-democratic maneuverings of Boris Johnson and his minions, and I can only hope to see that kind of resistance succeed in my own country for our own issues as soon as possible.

AMEN !!Hopefully the beginning of the end to a disgraceful era.

Would be nice, wouldn't it?

But then there will be the clean up. It will take a generation to undo the damage this president and his minions, cronies, lackeys, enablers, and partisans have done.

"This is not the end. It is not even the beginning of the end. But it is, perhaps, the end of the beginning." (Winston Churchill, also fighting Fascists at the time).

Item one: In addition to the Peace Prize, Greta should be awarded the Presidential Medal of Freedom. If for no other reason than he’d have to actually look her in the eyes.

Item two: Give an idiot enough running room and a large enough lariat and sooner or later you’ll have one hung imbecile.

Item three: a busy (how many?) years, and i really need a vacation.

3. Wouldn't that be nice? I'm up to my eyeballs in grading, drowning in current events, and generally behind in every aspect of my life. A vacation would be good, though I don't know how I'd get away from me. Ah well. If you do end up taking a vacation and find yourself in the upper midwest, give me a holler.