The ride home is always the hard part.

You left home with a child in the car.  The ride was shorter or longer depending on where you were going, of course, but it was nice to spend time with this child of yours, this child who isn’t a child anymore, not really.  And then you got there, and there was a lot to do.  Check in; get boarding passes; go through security.  Unload the car; get the bunk bed set up like the roommate did with theirs; haul stuff up the stairs (not as many as last year, but still).  So many things to do that you could focus on the tasks in front of you and not think too hard about the fact that you were there to drop that child off so they could go on to the next steps in their lives, steps that largely will not include you.

And then it’s over.  Everything’s been done.  The goodbyes have all been said, the hugs have all been given, and it’s time for you to turn around and go home.  Maybe you watch them disappear into their new world and maybe you don’t, but eventually you get back in the car and drive home and there is an absence where there had been a presence and you’ve got the entire ride back to think about that.

That’s the part that gets you.  The ride.

Two days ago there were four of us living here.  Now there are two.  More if you include the cats, who would be rather annoyed not to be included.  Cats are like that.

Lauren left first.  Her foreign exchange year started on Friday, and she’s been getting ready for it for a while now.  Paperwork.  Emails.  Pre-Departure Orientations in multiple states.  Packing.  Repacking.  All the things that had to get done.

She had a going-away party the weekend before – nothing big, just a bunch of her friends over for pizza and a bonfire in the portable firepit that is finally getting some use now that Lauren and her friends have discovered it.  They’re good people, and they seemed to have a good time.  It’s nice having them over.

Kim and I took the day off on Thursday.  Lauren decided she wanted to spend her last full day before departure at the next town over.  We had a lovely lunch and then spent an hour or so wandering around the town square, which is lined with nice little shops and filled with music piped out of the town hall in the middle of the square.  There was a baker there who gave us cream horns that he said were past their prime (having been made that morning, and he was now closed) but they were incredible and I will have to go back and get more.  There were antique shops.  There was a neat little candy shop where we got Leninade (a sweet pink lemonade with a strange Soviet-kitsch bottle) and popcorn.  It was a nice way to share time together.

That night was another bonfire only with a slightly smaller group and with chips and salsa instead of pizza.

Friday was the day.

Kim and Tabitha said their goodbyes to Lauren early, since both of them had to work that day, and then Lauren and I headed over to the local Cafe, where most of the group from Thursday night joined us for the supersized breakfasts that this place serves. 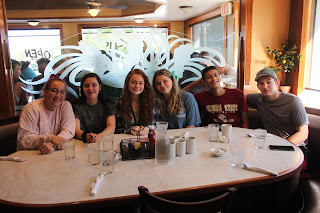 It was a lovely time and the goodbyes were hard but eventually Lauren and I got into the car and headed off.  We drove up to the Madison airport, got her checked in – surprisingly easy, which is why smaller airports are nice – and went to the security checkpoint. 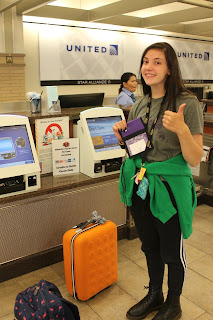 Then we went to the other security checkpoint, since the first one is only for the Pre-Check people and who were we peasants to interfere with that?  I didn’t mind, though.  It gave me three more minutes with her.

After our goodbyes I watched her go through the security line, and then she disappeared into the depths of the airport, bound for Europe.  She’s there now, safe and sound.  Other than social media and the like we won’t see her again until next summer, and she’ll be a different person then.  That’s kind of the point, after all.

It was a quiet ride home, just me in the car.

Today it was Tabitha’s turn.  The summer is over and it’s time to start thinking about sophomore year at Small Liberal Arts College, and the process is remarkably similar really – paperwork, emails, packing, repacking, all those things.  It’s a bit less intimidating the second time around, but still.

Kim, Tabitha, and I piled into the car this morning and headed off, stopping to feed the chickens on the way because chickens don’t care about your Life Events but do need to be fed.  It was a pretty day today – reasonably cool for August and not raining, which are the main criteria for a successful move-in day.  Nothing like shifting boxes in a deluge to make you appreciate a sunny day.

We got to SLAC in good time and parked in front of the dorm (the “Small” part of SLAC is nice for parking).  Tabitha and I went up to her dorm room and got her bed put together – a surprisingly complex task given the variety of pegs, holes, and widths involved – and then all three of us carried her stuff into her room fairly quickly.  She’s on the second floor this year rather than the third and that does make a difference.  Someone also lent us a dolly.  Three cheers for technology.  We also met her roommate, who seemed nice. 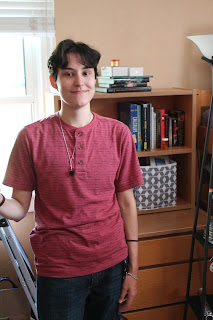 We had lunch with her and her friend Dustin, took the now-traditional photo by the Welcome Stele, took care of a few errands, and then we had to say our goodbyes.  On the one hand, we know we’ll see her this year, at least for holidays.  On the other hand, it will be a while. 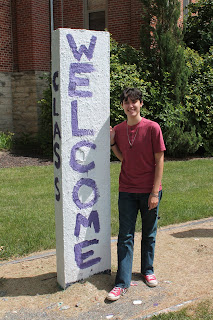 After that, we headed back home.

It’s better with two people in the car, to be honest.  The ride.

So now they’re both in their slots, where they will be for a while, and those slots are Not Here.  The house seems much bigger than it did just a couple of days ago.

When your kids are small you often find yourself wishing for a break, for some time to yourself.  I always found myself missing them when I got it, though, and looking forward to having them back.  I have no idea how I’m going to manage this whole empty-nest thing, but no doubt it will be fine.

I’m looking forward to having them back, though.

Do well, and be well, Tabitha and Lauren.  Have adventures, enjoy yourselves, and become what you will become.  You are moving out into the world and the world will never be the same for it.  It’s yours to change.  I’ll be here when you return.

Then you're doing better than me. ;)

Thanks, though. I do appreciate it.

Well, shit. Ewan is doing better than either of us. Also, I believe he was being just a tad facetious.

Life events like these are forever. Certainly, they are worth a tear. Or ten.

May Odin watch over them, and Thor protect them.

They are definitely worth it. They're supposed to hurt. That's how you know you've done them right. Still hurts, though. Sigh.

Thanks, Lucy. It's good to have friends, online and in meatspace, to share this all with.