Observations on a Dull Game

1. Sweet dancing monkeys on a stick, but that was a boring Super Bowl.  Three hours of two inept offenses being held in check by two hard-working but not particularly exciting defenses until finally the Evil Empire did just enough to squeak out a win and deliver yet another championship to the most entitled fan base in America.  Rah.  The rich get richer while the rest of us look on from the outside, and if that isn’t a precise metaphor for modern America I don’t know what is.

2. Yes, I watched.  Of course I watched, even if it was a game between two teams I really don’t like playing a sport I’ve been losing interest in for a decade.  My team won it all last year so I’ve got that bump in interest still going for me, plus it’s my Salt Holiday – this is the one day on the calendar where I cast doctor’s advice to the wind and stoke up on chips, dip, and pretty much every sodium-laden treat that I try to avoid during the rest of the year, which makes staying on the straight and narrow easier those other 364 days.  You have to have one day to do that in order to survive the rest.  So I watch, regardless of who’s playing.  It would have been nice to have a team to cheer for and even nicer if the usual winner wasn’t crowing about it afterward, but you can’t have everything.

3. Although the women’s curling matches that were on against the football game were tempting.  And so help me if there had been a Premier League game or if the Flyers had been playing, I’d probably have switched the channel before kickoff.

4. I’m kind of glad that I don’t do those Salt Holidays much anymore – at some point you just stop being able to deal with them as much as you’d like to, and I suppose that’s the point of it all.  Today was a long day.

5. The only good things about that game were Tony Romo – whom I’ve always liked, even when he was leading the previous Evil Empire, because he always had a look like he was getting away with something, and who is far and away the best announcer working the game today – and the NFL 100 ad, which was a fun game of “right, who is that one?” 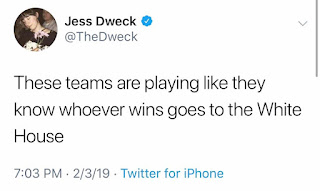 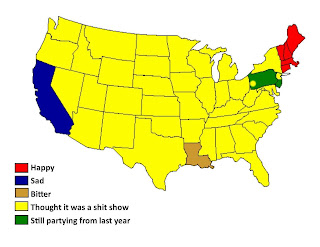 8. I never stick around for the halftime show because that’s just never anything that’s going to end well.  I have no idea how it went, to be honest.  I can’t say that Maroon 5 is a band that does much for me one way or the other – they seem perfectly serviceable, in a focus-group-tested FM-radio sort of way – but I hope for everyone’s sake that it went reasonably well.  It’s a big stage.

9. What was fascinating about the game is that nobody I know was talking about it today.  They weren’t celebrating.  They weren’t complaining.  It was as if the whole thing had been dropped down a well.  Some of that is probably the fact that my team wasn’t in it and I don’t pay much attention if they’re not so maybe people were talking and I just wasn’t listening, and some of it was no doubt the fact that Dynasties Are Boring and celebrating or even complaining about the umpteenth championship by the same team is kind of beside the point.  Eventually even the winners stop caring.
Posted by David at 9:54 PM

If I wanted to watch a bunch of guys run around and not score, I'd have taken my friends to a bar.

It was that kind of game, which was a shame given that the other playoff games were generally pretty good.

Last year I followed the Super Bowl via live feed on my iPhone in a hospital bed in Pakistan. This year I couldn't be bothered, and I'm glad

Last year's game was much more interesting and had someone to cheer for, after all. And the Good Guys won. :)

I'm glad that you spent this year not in a hospital bed, at least. That's an improvement!

I have to confess I knew this game would end the way it did when New Orleans was cheated out of their victory by that boneheaded noncall at the end of their game - they were the only team in the NFC that had a better than even chance of beating the Patriots - but I didn't foresee how much of a snoozefest the actual Super Bowl would be. You made the right call to ignore it.