In case you missed the news, it’s cold here in Wisconsin.

Seriously, dangerously, butt-kicking cold.  Granted, not “northern Canada” cold, but still colder than Mars (that’s true, by the way).  It’s cold enough to shut down pretty much everything around us, including Home Campus and all of the local public schools.  Tomorrow morning it’s going to be -27F (-33C) with wind chills of -45F (-43C), and Thursday morning it will be -32F (-36C) with wind chills of about -55F (-48C) – both mornings far colder than last week’s predictions.

Colder than a ditch-digger’s ass in the Klondike, as the old family saying has it. 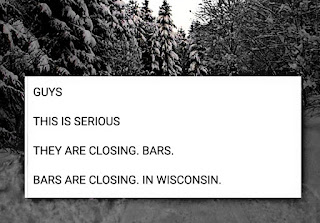 This is the sort of cold that can give you frostbite in less than five minutes if you’re not careful.  It’s the kind of cold where your car just says, “Yeah, right” when you try to start it.  It’s the kind of cold where you stay in unless you have a very good reason not to, such as your bedroom being on fire, and even then you’d probably pause for at least a moment and think “at least the bedroom is warm.”  That kind of cold.

My plans for the next two days include a great deal of “Not Going Anywhere For A While, Thanks”.  I should have bought more candy bars, I suppose.

I have my tea kettle, my books, my internet connection, a pile of work that needed to be done a week ago, and no more excuses to avoid it.  I’ll spend the time bundled up in warm clothes, surrounded by mugs of Yorkshire Red, busily putting the finishing touches on a January project, and taking breaks with Nick Harkaway’s latest novel.  Sounds like a plan to me.

Lauren’s plans, however, were more ambitious.  Once it became clear that there would be no school for much of this week today morphed into Sleepover Day.  A fairly large group of her friends were already here when I got back from work today, and we all crowded around the dinner table for some homemade chicken soup – a lovely thing on a cold day.  Several have gone home now, but most are still here and, from all appearances, having a good time.

I have no idea how long they plan to stay tomorrow.  We have no pressing tasks and we do have chili ingredients for dinner, so I suppose we’ll find out when we need to.

Our thermostat is bumped up so the interior stays warm all night.  The space heater in the basement is running well and set up to be safe, so neither rabbits nor pipes will freeze tonight.  The cabinets under the kitchen and bathroom sinks are open to keep those pipes warm.  We have blankets upon blankets.  We’ll be fine.

Sounds like ya got most of a good plan all drawn up. However, please don’t forget to leave some water running somewhere in the house. Frozen and/or broken water mains are a real thing.

A real BAD thing. (He says, speaking from experience … )

Oh yes - the faucets are set to a thin stream, the cabinet doors are open, the furnace is on "hold" at the normal daytime temperature rather than the lower nighttime one. We're as ready as we're going to get.