We had our second Christmas this past weekend.  Any resemblance to hobbits is purely intentional because – like all of our family events on both sides of the family – it involved a great deal of food.  What can I say?  We know what we like, and it isn’t being hungry.

We headed up to Kim’s parents’ house on Saturday.  It’s a nice ride through the Wisconsin countryside, which looks surprisingly like a lot of the countryside we drove through on our previous Christmas trip (once you get west of the Ohio state line) except that we recognize the radio stations and can skip the ones that play objectionable music without having to wait to be serenaded.  It’s more efficient that way.

We were, surprisingly enough, the first to arrive.  It’s always the people who have to travel the furthest who get there first, mostly because you have to plan for contingencies that usually don’t happen while the people who live just down the road can fall out of their chairs and into wherever they need to be.  This is why we never wanted to live near a school.  Not because of the screaming hordes of children or their parents, but because we knew, deep in our hearts, that we’d never get our kids there until the moment the bell rang.

There was much unpacking and snacking.

And then there was a significant amount of hanging about and catching up while others arrived, which is as holidays ought to be.

Eventually dinner was ready and we mostly sat down to eat, except that while my side of the family can sit down at a table for days on end, happily working our way through whatever’s on the table, Kim’s side of the family is a constant blur of motion during which vast quantities of delicious, delicious food somehow manages to get consumed.  It all works.

The main gift-giving event is, as proper, centered on the kids, and there was a joyous interlude of chaos and thank yous. 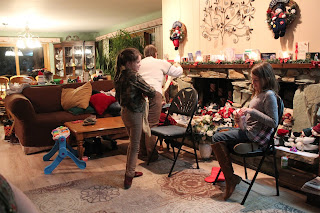 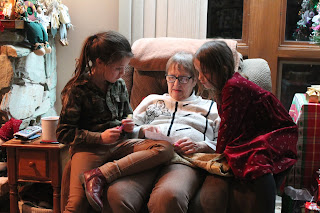 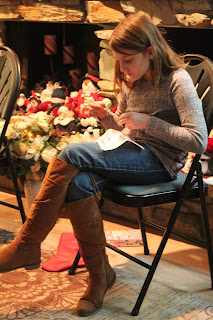 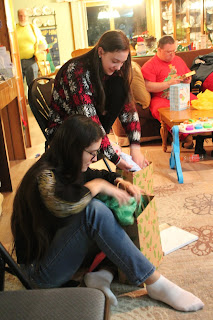 The adults skipped the first round of gifts, but gathered around the table for The Game.  Six piles of gifts.  One die.  Then a lightning round of forced trades. 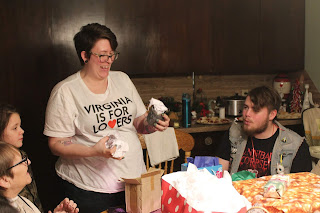 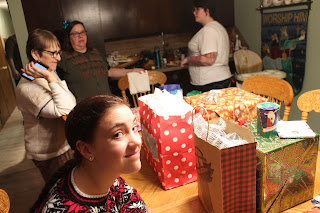 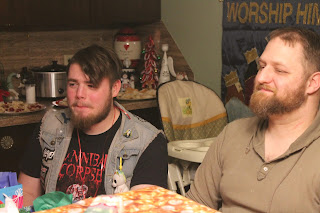 Eventually we had to go home, as it was a bit of a hike back to our own beds and we wanted to get to them at a somewhat reasonable hour.

So the holidays are now at an end, at least until next year.

Merry, merry, everybody.
Posted by David at 7:58 PM