We got the tree up this weekend. 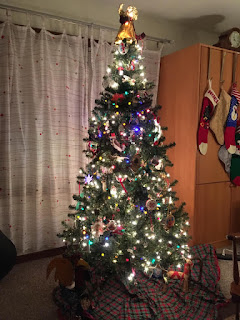 It was just me and Kim this year, decorating it.  Last year we had three teenagers working on hanging ornaments – Tabitha, Lauren, and Fran.  This year Tabitha’s away at college, Lauren was out playing with the school band at a basketball game, and Fran is back in Belgium (and also at college).  Things change, and surprisingly quickly too.

This is probably the last year for the artificial tree, as it’s kind of looking bedraggled and worn.  Lending it to the Local Businessman High School production of The Lion, the Witch, and the Wardrobe last year probably didn’t do it much good, though it did make the forest nicer during the show.  The things you do for theater.

The artificial tree is a bit smaller than the ones we usually get from the tree farm when we have a real one, which means that a certain amount of ornament-editing needs to take place.  Kim and I have been married for more than two decades now.  You collect a lot of ornaments over a time span like that.

When you’re first married you get those big, inexpensive, shiny ones – the ones that let you cover Maximum Area for Minimal Money, because young married couples are not known for having excessive amounts of ready cash.  But over time you get others.  Sentimental ones that come from certain places and times.  Nice ones that people give you, or that you decide are worth the price.  And then you have kids and whole new categories of ornaments appear.  The ones that people give you to commemorate their First Christmas or such.  The ones they make when they get older.  Their favorites.

You can’t put them all on the small tree, so you have to be selective.  There are basically three kinds of ornaments up there this year.

First, there are the travel ornaments – the ones we’ve picked up as we’ve gone here and there over the years.  The little bottle of Tabasco we got on our honeymoon.  The various keychains that I buy wherever we go instead of more conventional souvenirs.  The actual ornaments with names of places where we got them.  The things we’ve converted into ornaments that weren’t meant to be but so it goes.  Someday we’ll have an entire tree just with these, perhaps.

Second, the kid ones.  The ones they made when they were young, with crayons and glue and bits of felt.  The ones with their photos.  The ones that they like and insist that it’s not really a Christmas tree without those.

And finally, the generally sentimental ones.  The Ukrainian one shaped like a yoyo that Kim’s had forever.  The brass wire one my parents gave us a while back.  The tags from long ago pets.  The big green ball that says “Sophia,” which is an inside joke of long standing.  The brass bugle that sits underneath the tree and will no doubt be heard once again.  The pickle.

Everything has a story, and for me that’s a lot of what the holiday means to me – sharing stories, even if it’s just in our own living room among ourselves.

May your holidays be filled with stories.
Posted by David at 8:42 PM

And the ornaments that replenish the memory of absent friends and family.

Love, Joy, and Peace to you and your family this holiday season.

Lucy,
My Viking,
and all the members of our family.

Those are the most sentimental of all.

Peace, love, and cocoa to you and yours as well, from all of us.