It’s been a quiet sort of Fair this year.

Kim and I handed over the Drama Project to new people this year so we didn’t have to worry about herding actors around or scheduling pick-up rehearsals to remind people of lines they last spoke in May or setting up performances.  The new people did just fine with the kids, and the performance at the Drama Festival in May went very well.

We don’t have any poultry in the Fair this year.  This past spring we looked at Lauren’s projected calendar this summer – a list of things that made you exhausted just looking at it – and said, “Well, something has to give.”  She chose to forego the poultry project, which meant no turkeys and no new chickens.  On the one hand, I do miss the turkeys (though not enough to raise them myself, admittedly).  On the other hand, we still have the old chickens and they are still laying eggs, and, well, something had to give.

She was going to have pigs in the Fair again this year, but we missed a deadline for DNA testing and the Fair people are just gangbusters about those deadlines, to be honest, so that was out.  We sold them to the guy who owns the farm where they were being raised.  Given how the summer has turned out, I’m not sure when she would have had time to work with them anyway.

Lauren is fairly sure she will do both poultry (at least chickens) and swine next year, so my guess is that the Local Community Marching Band will be the thing on the chopping block in 2019.  It was a good run.  Something has to give.

So this year for Lauren it was just rabbits, photography, and houseplants, while Tabitha stuck to her visual arts and drawing & painting projects.  All of these things are essentially over by Wednesday night and collectively do not require nearly the effort to bring in and have judged that the turkeys did all by themselves, which means a generally quieter Fair season than we’ve had in quite some time.

This is not necessarily a bad thing.

For a great many (generally happy) reasons, I couldn’t really take off work this week for the Fair anyway, so having Tabitha driving was a grand thing as she could get her artwork in and judged on her own as well as get Lauren to the Fair for her photography judging, and since Tabitha is now officially an adult in the eyes of the law she's also able to chaperone when Lauren does her driving time, so win all around I say.  Kim and I did help get the rabbits situated (and we were there Saturday morning setting up the rabbit barn, as always) and help get Lauren’s other projects delivered as well.

I don’t understand the photography judging.  Every so often they ask me to be a judge because I am a warm body and my daughter is in the photography project and volunteer-run organizations are just like that, but I couldn’t do it.  First of all, I tend to like most things and find it kind of difficult to subject them to criticism that is too rigorous (especially when it comes to Danish judging, which works on a strict percentage curve).  I'd be a terrible judge that way.  And second, I have no idea why they make the decisions they do.  Things that I would have given blues to get whites and vice verse, and don’t get me started on some of the things selected for Merit or State Fair.  Clearly I am out of the loop, and it is probably best for all concerned that I stay out of it.

I rather liked Lauren’s photos.  She has a good eye.

She submitted two projects – Four Color Photos Of One Object (a sneaker viewed from a number of artful angles) and Four Color Photos of Different Objects (one person, one animal, one landscape – for which she chose a cityscape, which I thought was creative but which I suspect might have struck the judge in this largely rural county as not really what they were looking for – and one building).  The sneaker got a red, while the different objects got white. 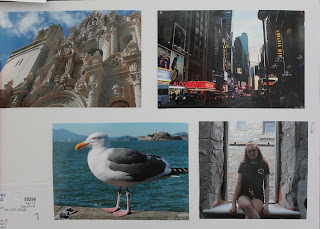 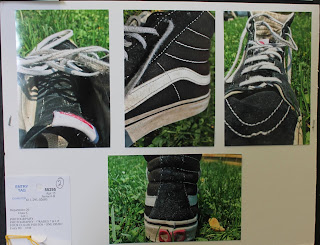 Her houseplant entry was somewhat abused by the weather, unfortunately.  We had it outside by the eaves and it rained and the gutters turned out to be unable to handle that volume of rain (I need to clean them out, apparently) so the poor basket was just pounded by water a few days before the Fair.  She did the best she could to revive it and it did turn out reasonable looking, but it still got a pink. 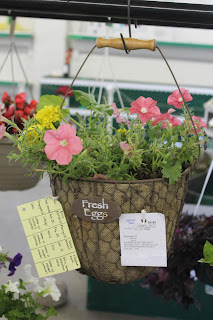 Rabbit showmanship was Wednesday afternoon, and for long and complicated reasons I just barely missed it.  Lauren did well, though.  There’s another girl in her class who also does well and they’ve been trading the championship back and forth for a while now.  This year the other girl won and Lauren got a top blue – second place overall – which is a very nice job, really. 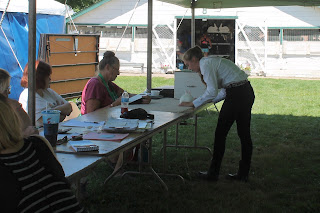 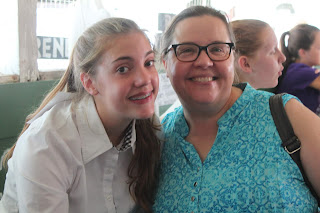 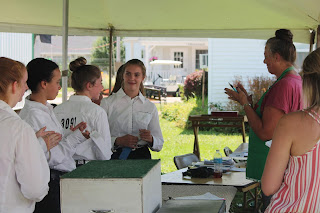 Last night they judged the rabbits themselves.  The kids scoop up their bunnies and trot them from the barn to the livestock pavilion – always an invitation to slapstick – whereupon the judge comes along and prods them (the bunnies, not the kids) like bread dough for a while and then gives out ribbons.  Both of Lauren’s rabbits got red ribbons, which we suspect is at least in part due to the fact that until this year she was the only person who shows Dwarf Hotot bunnies (this year there was a second) and the judges, not being all that familiar with the breed, don’t quite know how to evaluate them.  We asked Lauren what the judge said to her during the prodding process and she said, “Well, he told me the usual things that they say when they don’t quite know what to say.”  But reds are good, and so we wrapped up the bunnies. 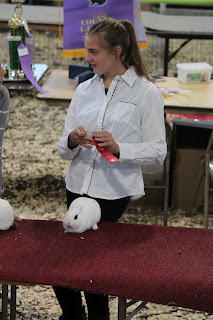 Kim and I wandered about the Fair for a bit after that.  It’s feeding time at the human zoo, and you have to love it for that.

For her projects, Tabitha submitted a painting, a mixed media artwork, a digital artwork, and a piece of ceramic art. 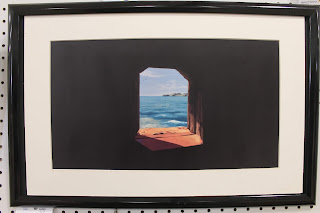 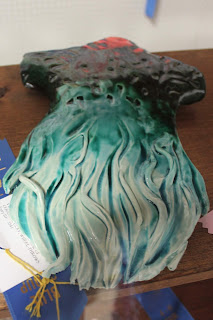 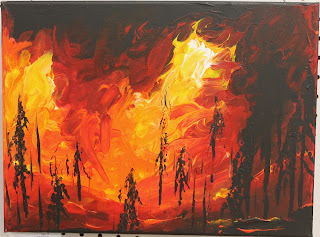 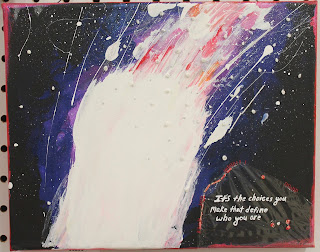 I like them all - she's got a lot of talent - though I confess that the forest fire one is my favorite.  They all got blue ribbons – even the digital art, which was again judged by someone who didn’t seem very comfortable with digital art (“You mean you didn’t just edit a photo?”) – and the forest fire and mixed media both got top blues, which is very nice indeed.

So we’re pretty much done with the Fair as far as obligations go.  It’s an odd feeling not to have required events every day.  We still have to man the bakery tent for a couple of hours on Friday, after which our friends Heidi and Travis will come down to join us at the Fair as they do every year, and everything loads out in one frantic blaze of adrenaline on Sunday night, but otherwise we’re good.
Posted by David at 10:02 PM

"I don’t understand the photography judging." Nobody does. Especially the judges.

I have, in the past done an awful lot of photography. My thing is ultra-high contrast black & white.

Now I'd like to ask you for a special favor: Can you get me a better photo of the art piece (looks like a view of the ocean from a mine shaft, two above the forest fire) and email it to me (with the dimensions)?

I'd like to learn more about photography - I even took that class this spring, though it didn't quite pan out as I'd hoped. Figure photography, and perhaps portrait photography as well - I love taking pictures of people. Someday.

Ultra-high contrast black and white sounds like it would be gorgeous. When Tabitha was first born and I was still using film rather than digital, I always made sure to take a roll now and then of black and white. It was hard to find even then, but I liked it.

I'll PM you on the art piece.

Photography really isn't all that complex, in my experience, anyway. All three of the really good professional photographers who live here and make a very good living selling their work are mostly "self-taught go with whatever your gut tells you looks good cause somebody will buy it" kinda people.

One of my favorites: https://www.rubymountainphotography.com

We actually have a few of her photos framed and hanging on our walls ...

Most of what I’ve shot could best be described as "abandoned buildings”, "mining and farming equipment" and “early cemetery post-modernist-western tumbleweeds”. And a couple of castles thrown in for good measure. I then make an honest effort to render those in pen and ink.

I gave up on portraiture after the third wedding. It’s not incredibly difficult to please an old interesting tree or headstone - but you’ll never please more than 10% of the wedding party. (There's a reason why they take 400 photos. They hope you'll actually pay for 40 of them ...)

I'm largely self-taught as a photographer, by virtue of sheer repetition. I learned very early in my life that every group of friends needed a photographer (this was back when not every device had a camera embedded in it) and if I was that photographer then not only would I get to keep all the photos but also I would not be in any of them. That sounded like a win to me. I've gotten good at it, though I have a great deal of room to improve.

Lauren loves to take pictures of things - she has a really good eye for an image, actually - but I like people. The problem is that I can never find people willing to be subjects for very long. The main reason I abandoned my photography class (other than the fact that the semester got busy and something had to give) was that we got to the portrait unit (the one I was waiting for!) and couldn't find willing subjects. Oh well.

I suspect that I would be doing it to please me rather than anyone else. I'm not looking for it as a business, so that makes it easier. :)

Photography is like playing the guitar. There are an awful lot of people that play the guitar, damn few that anyone is going to pay cash to listen to.

There is a very sound reason why I drive for a living ...