There are times when I really, really, really enjoy the fact that I am from Philadelphia.  Watching der Sturmtrumper make a complete ass of himself by abruptly canceling today’s visit to the White House by the Super Bowl Champion Eagles because, according to the official White House press release, only a “tiny handful” of players would consent to be seen with him has definitely been one of those times.

I like to think that the flunky who wrote that press release is secretly on the side of the angels.   I wonder if der Sturmtrumper caught the reference.

Of course, this asinine nonsense could not go unchallenged, and folks – if you’re going to get into an attitude contest with a Philadelphian, you are going to lose.  It’s an art form where I grew up.  We don’t do Amateur Hour.

First came the reactions from local Philadelphia officials, which were priceless.

Congressman Brendan Boyle (D-PA), representing Philadelphia, took der Sturmtrumper to task for the psychopathic narcissism that made this happen.  “You even make a championship team visiting the White House all about you,” he said.  “What is wrong with you?  Seriously, what condition do you have?”

Philadelphia Mayor Jim Kenney followed up with a statement noting that “The Eagles call the birthplace of our democracy home, so it’s no surprise that this team embodies everything that makes our country and our city great. … Disinviting them from the White House only proves that our President is not a true patriot, but a fragile egomaniac obsessed with crowd size and afraid of the embarrassment of throwing a party to which no one wants to attend.”

“City Hall is always open for a celebration,” he added, providing more than enough shade for a summer day.

It’s not like Mayor Kenney is alone in his observation about crowd size being the primary motivator here, to be honest.  Hell, der Sturmtrumper even said so himself!  The reason der Sturmtrumper canceled the invitation was “the Eagles wanted to send a smaller delegation” than he demanded, and we just cannot have small delegation in der Sturmtrumper’s increasingly grandiose private fantasy world.  No, we cannot. 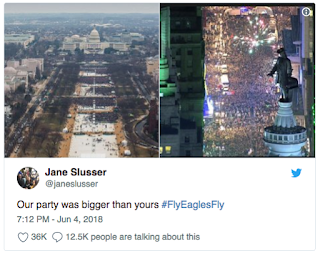 Then came the reactions from the players themselves.

Mostly this is because der Sturmtrumper insists in his fevered imagination that the Eagles are disrespecting the national anthem that he is most bravely protecting.  This is truly weird.  The national anthem does not need protecting, especially from a guy who can’t actually remember the words.  But it makes as much sense as anything else the right wing puts out these days, I suppose.

Naturally, Fox “News” decided to get in on the action with a video featuring these images, among others: 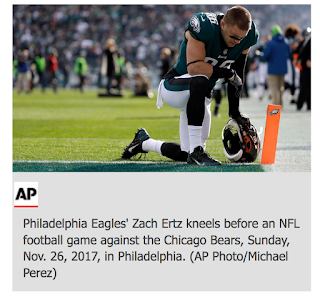 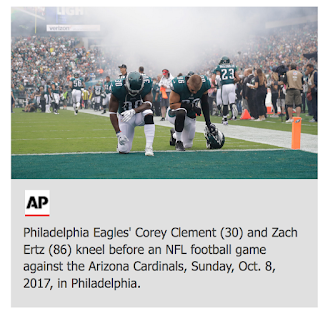 Eagles tight end Zach Ertz was quick to note the rank stupidity of this Fox “News” report.  “This can’t be serious,” he said.  “Praying before games, with my teammates, well before the anthem, is being used for your propaganda?!  Just sad, I feel like you guys should have to be better than this.”  They should, but they aren’t, alas.  Linebacker Jordan Hicks responded to Ertz with a parody of der Sturmtrumper himself: “So sad!!”  And defensive end Chris Long – who donated his entire 2017-2018 salary to charity – lambasted Fox further.  “Imagine wanting to please the boss so very badly that you run stills of guys knelt down PRAYING during pregame,” he wrote.  “Not one Eagles player knelt for the anthem this year.  Keep carrying his water to sow division while misrepresenting Christian men.  Aren’t many of your viewers … never mind.”

Yeah, better just to let that sentence go unfinished, in my experience.

What makes this better is that even some Cowboys fans and Patriots fans became, however briefly, Eagles fans over it.  That’s how utterly bizarre this whole thing is. 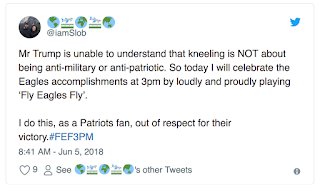 Not that any of this stopped der Sturmtrumper from hosting his own Very Special party with a pile of “Eagles fans” specially magicked up from whatever laboratory creates Republican staffers and animatronic Disney figures.  It was a YUUGE success!  Many people said so!

Of course, here in Reality, the party lasted five minutes, der Sturmtrumper forgot the words to God Bless America, and it fooled absolutely nobody with more than six functioning brain cells.  Tim Furlong, a reporter with the NBC station in Philadelphia who attended the event, noted that “I’ve asked 6 of the ‘fans’ at the White House who was the Eagles quarterback during the Super Bowl.  Not ONE person knew.”  I guess this isn’t much of a surprise, given the fact that so many of those alleged “fans” wore business suits and Furlong counted exactly one item of clothing with an Eagles logo on it in the entire crowd, but then faking an official White House event takes skills that these idiots don’t have.  Can’t even get good crisis actors these days.

Although this guy?  Not all heroes wear capes. 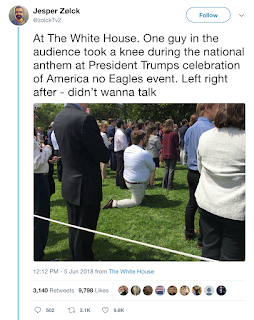 Go ahead and throw your toddler-level hissy fit, Mr. Sturmtrumper.  Go ahead and complain.  Go ahead and lie about this being anything other than a protest against police brutality, a respectful and very American dissent from the overbearing authoritarianism you so desperately seek to impose.  Go ahead and pretend that this is something you have any influence over or that anybody outside of your charming little ideological bubble is interested in your opinion.

“… if you’re going to get into an attitude contest with a Philadelphian, you are going to lose.  It’s an art form where I grew up.  We don’t do Amateur Hour.”

Them’s clearly fightin’ word, pilgrim. There’s more than one “Attitude U” in this land and,

“Yeah, better just to let that sentence go unfinished, in my experience.”

PS: Something, not sure what it is, tells me you’ll enjoy this:

We will have to agree to disagree on this one, Lucy. Other places have attitude - Philadelphia has Addytood. I know where I stand. ;)

I can't see the video right now because my computer has decided that all videos will simply be a blank green screen. I understand there is a way to fix this, but I have not actually gotten to it since it requires me to restart the computer and I have too many half-finished projects open to actually fix the problem, and if that isn't the story of my life I don't know what is.

I'll check it out soon!

Still having trouble with that sarcasm font ...

Well, in fairness it's been a long month for me so I might have missed it even if you had it down pat.

My computer decided that it was going to update for me whether I wanted it to or not, so all of my projects got wiped out but hey - I can see videos now. Have you ever wondered whether you should laugh or scream? That video - yes. :)

I can do both, though. I'm talented! Kind of.

There is a reason why I run a Mac.

And that kind of talent is in short supply. 😎

My computer is a Mac. The blight has spread even there, alas.

Wow. Never has such a bug.