Marching With the Future

What did you do for the first anniversary of the beginnings of der Sturmtrumper’s Reign of Error?

I spent the day marching with the future of America.  It felt good, and it gives you hope for this country.  We do need that, in these parlous times.

Over the New Year’s holiday Lauren and several of her friends said they would be interested in participating if there were a repeat of last year’s Women’s March.  How could we turn down that kind of patriotism?  So we told them that if there was a march near us, we’d take them.

Fast forward a couple of weeks and three things have become clear.  First, that there were in fact marches scheduled near us, even if not where they were last year.  We could still go.  Second, that Lauren and her friends remained committed to going.  You know it's important, then.  And third, that this year’s Winter Crud just sucks and too many people are sick.  At least one of Lauren’s friends had to bail on the march because of that, and so too did Kim.

So it was a slightly smaller but no less enthusiastic group that went down to the march today.

The girls spent the morning making their signs, which took a bit longer than planned.  Nevertheless we managed to get down to the march with about three minutes to spare and join in.  The signs were worth the wait, I think. 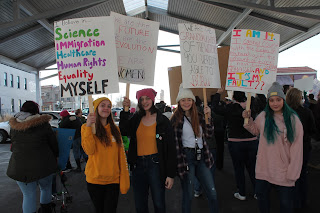 It was a decent crowd – probably somewhere around 1500 or so, maybe a bit more – and a warmish January day here in the upper midwest, so everyone was in pretty good spirits.  Midwestern demonstrations are just so polite it’s almost eerie.  People marched along with their signs and slogans, speaking in complete sentences about the reasons for their presence and what they hoped to accomplish both with this march and with their future actions.  They stopped for streetlights.  Cops said hi and we said hi back.  People driving by honked and gave us thumbs-up signs, and we cheered and waved our signs back at them.  It was political protest as conducted by grown-ups.  There was a refreshing lack of Nazis, which the current Administration should take it as a model for how civilized humans behave.  Might do them some good. 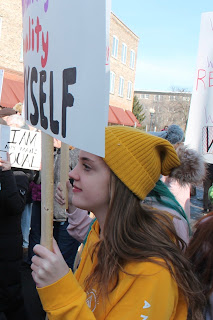 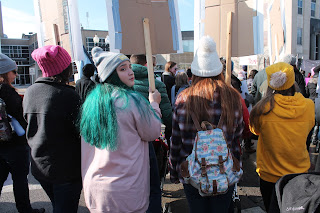 Lauren and her friends had their photos taken by a lot of people.  People my age love it when people their age get involved like that.  It gives us hope that the future will be better than the current hot mess.

Eventually everyone spilled into the gymnasium attached to a nearby church to listen to any number of local dignitaries expound on all of the themes of the day.  That real Americans are not happy with the direction that der Sturmtrumper and his minions, lackeys, cronies, enablers, and sycophants are dragging this country, and we’d like it to change. 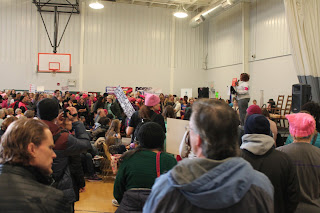 On the way out they had a giant banner for everyone to sign, and so we all did. 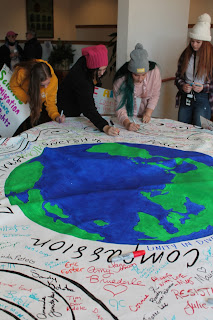 As with last year, I have few illusions as to the practical consequences of this march.  At least not the immediate ones.  There will be no policy changes in the near future.  There will be no sudden realization that when your actions are enough to cause mass protest, maybe you should rethink your life choices.  There will be no lessening of the unrepentant cruelty, catastrophic short-sighted greed, or sheer incompetence that has been the trademark of this administration since it metastasized across the American body politic as well as of the party behind it for the better part of two decades.  Those won’t change.  At least not anytime soon.

But we march anyway.

We march to send a message to those in power, to make sure our voices are heard.  It’s a fairly simple message.

You are on the wrong side of history, morality, and American patriotism and values.

We will make sure you and all your works are forgotten.

"People my age love it when people their age get involved like that. It gives us hope that the future will be better than the current hot mess."

The torch is being handed to yet another generation - one that understands that change only happens through action, and that it all begins with 'you'.

It is because of this, that I will "sleep well".